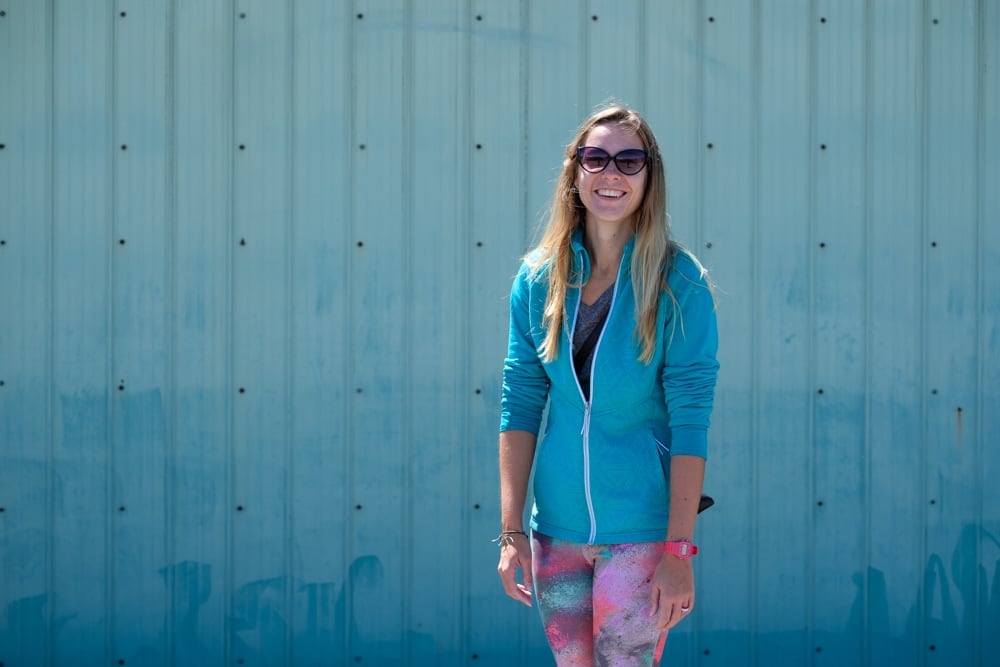 This post has been a long time coming, we're now home and have been moving house and kitting out a van to be a campervan so we've been pretty busy. The last couple of weeks in Canada were a weird miss match of feelings; one the one hand we were glad to be going home soon and on the other we just wanted to visit the next new place. Overall Canada was a bit of a wind down in terms of distance covered and things seen and done but we still had a good time!

We arrived in Whistler Creekside having successfully purchased tickets in another run down Greyhound office (I recently received an email saying that they are shutting down nearing all their operations across British Columbia, which makes sense). A short and easy drive later and we were once again walking to another new place to live.

As is usual we arrived too early to check in to our Airbnb so we holed up in a satisfyingly Canadian diner nearby and had a slow and filling lunch. We eventually left Southside diner, full of lunch and dessert and dragged our decidedly heavier mid sections over to the grocery store to get food for the next few days. Netflix and dinner made up the rest of the day's exciting activity. 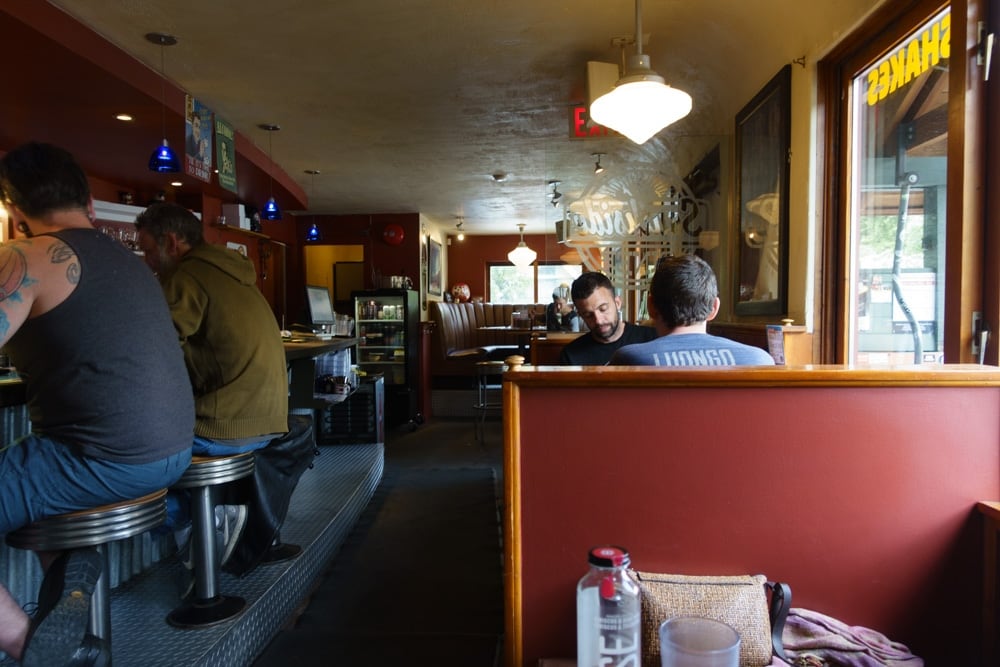 The weather in Whistler was mixed so we didn't rush to get up and out and spent most mornings chilling in the Airbnb and only heading out for the afternoon. That's not say that we didn't get up to anything exciting though! For our first adventurous activity: maple syrup baked beans! Yes. Welcome to Canada. 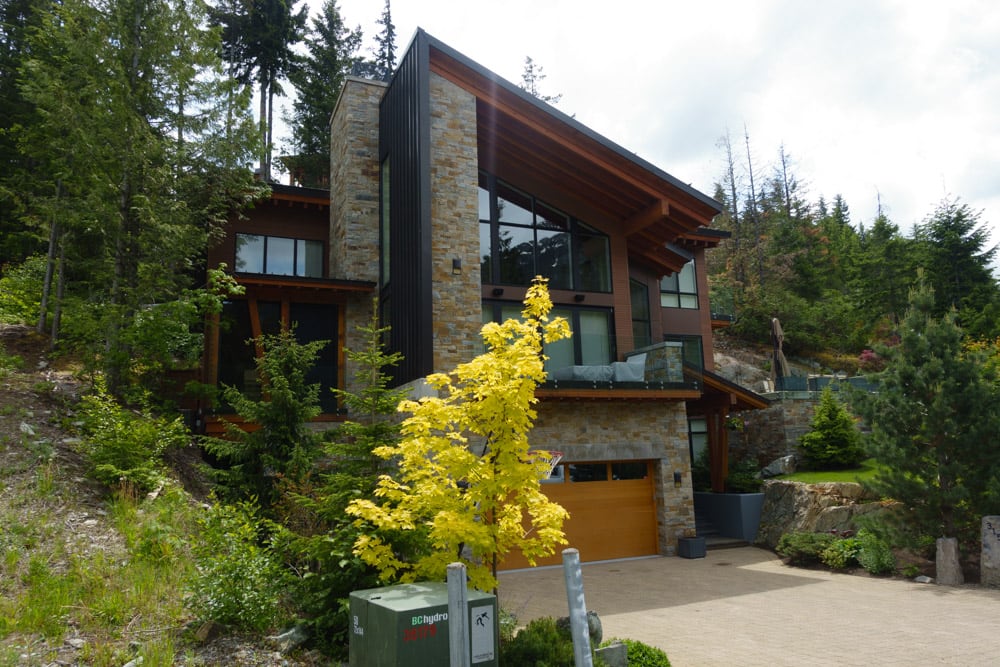 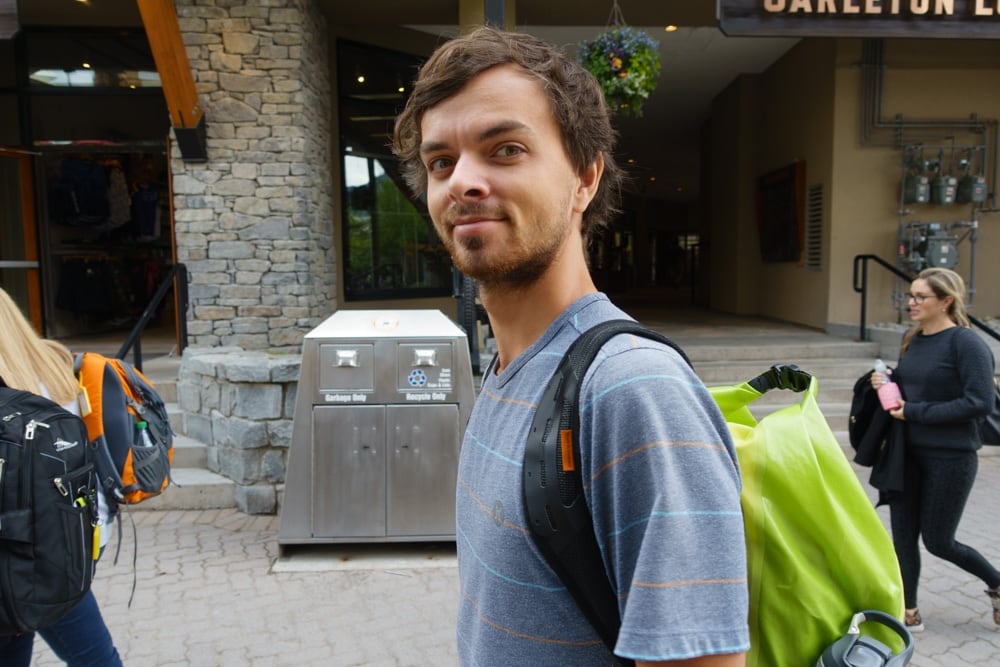 Things picked up from there though, with the snap decision on Nikki's part to book a zip lining experience for the next day we soon found ourselves being clipped to a series of kilometre long cables and pushing ourselves off solid ground and into the air. 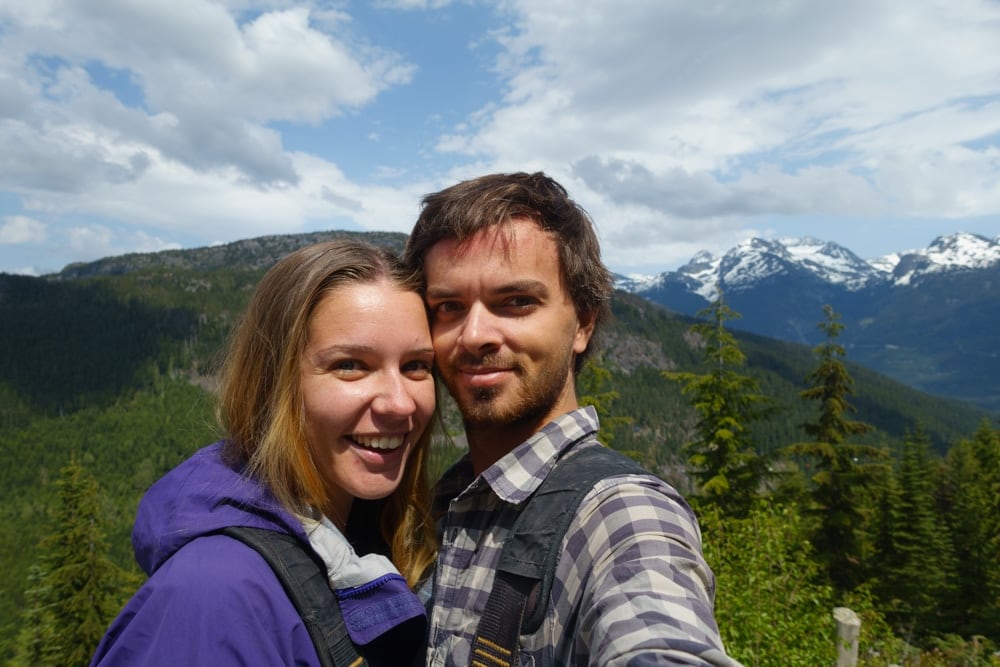 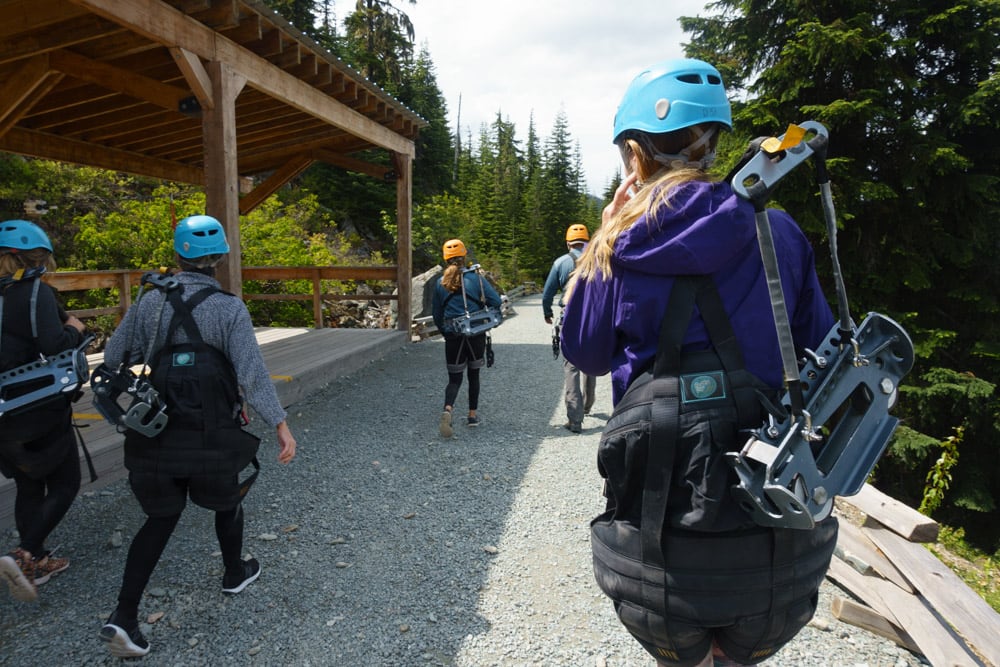 Our zip lining experience with The Adventure Group started with a short shuttle bus and an ATV ride up a mountain road. Once at the top the group thinned as varyingly confident pairs got attached to the line and zoomed off. Nikki and I went last and sat in our oddly comfortable harnesses waiting for the green light to go. I sat staring at the distant hillside, about a kilometre away and pondered the gap in-between that I was about to fly over the top of attached to a narrow metal cable. 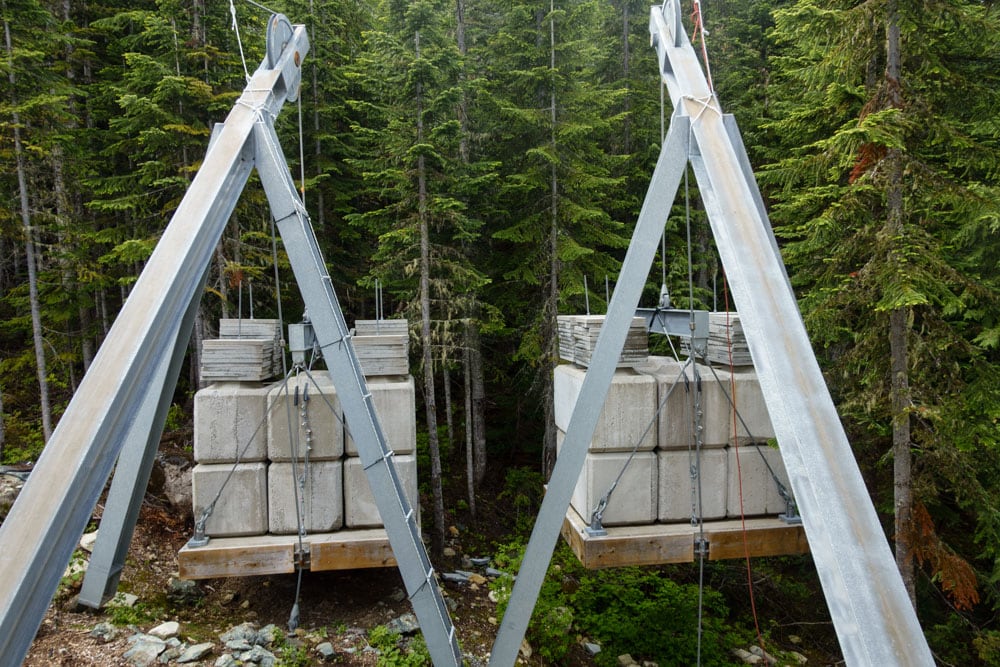 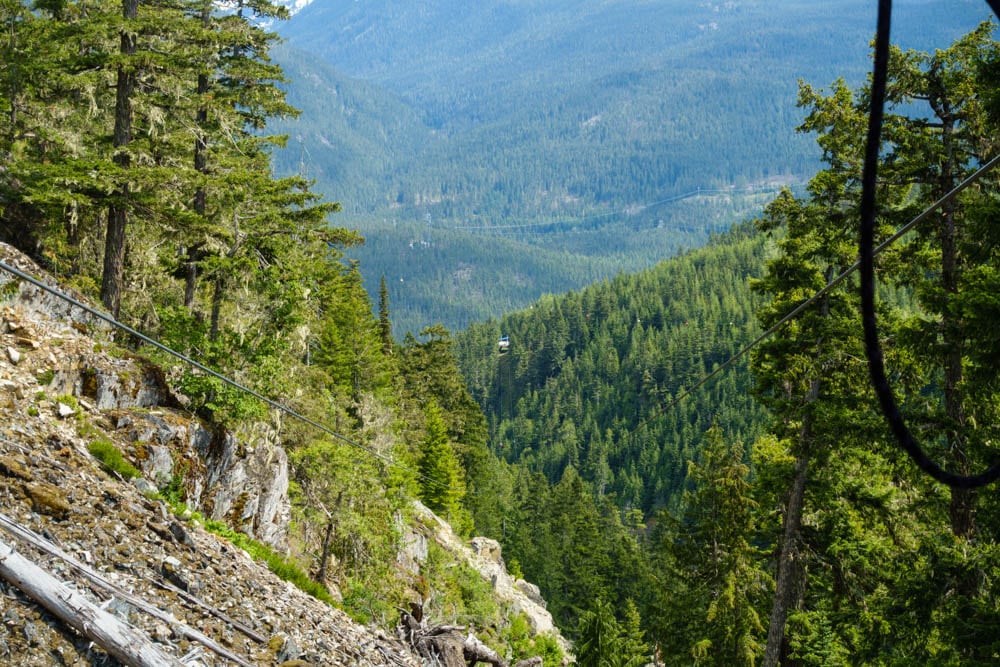 I don't have an issue with this kind of thing but sat there looking at the whole set up I was hanging there thinking "This is a very strange thing to be doing. And how did they get the cables set up?". Our guide let us go and soon we were zooming across the open space just like we'd seen other pairs do, disappearing into the distance.

The speed was almost instant, the air rushing all around you, in your eyes, the wind noise battling your eardrums, loose clothing flapping like crazy, screams and shouts were lost to the wind. Adrenaline and heart rates spiked, eyes widened at the view and scrunched against the wind. 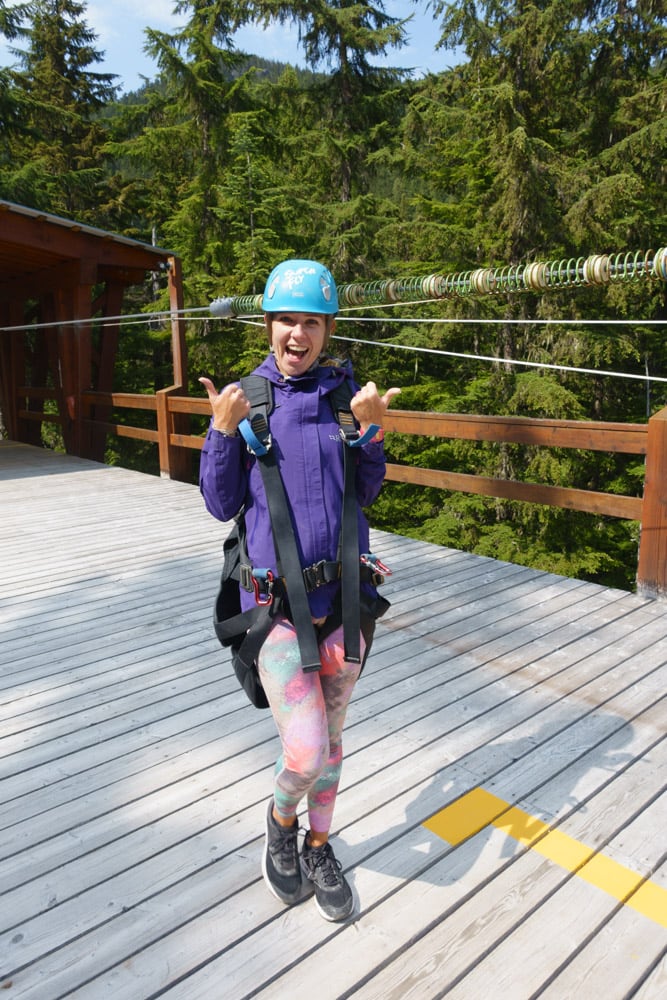 I started the first zip line with my arms and legs spread out, filming a couple of clips on a Go Pro and looking around at the view but saw Nikki speeding up ahead of me so I tucked my arms and legs in to make myself more aerodynamic. In this new position I overtook a bemused Nikki just before coming in to 'land'. We got unclipped and with nervous energy both exclaimed how much fun that was. 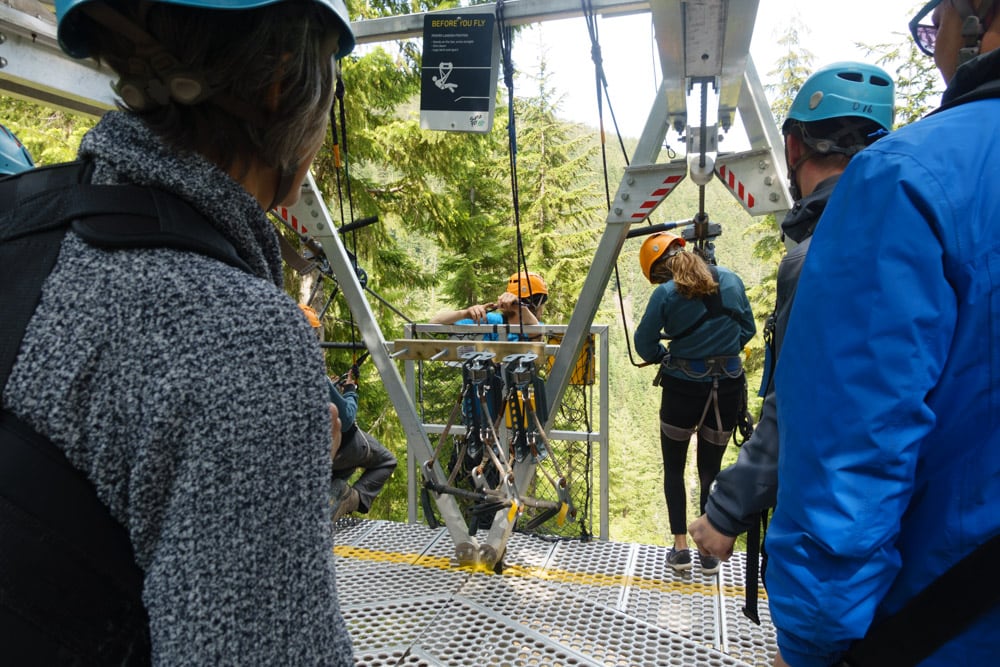 We did several more equally exciting zip lines over the next couple of hours, with most of that time spent waiting for other groups members. The time spent waiting wasn't boring though, with entertainment provided by the dry humour of the guides and endearing nervousness of some members of the group. We rounded off the excitement of the zip lining experience with halloumi burgers for dinner. A good day all around! 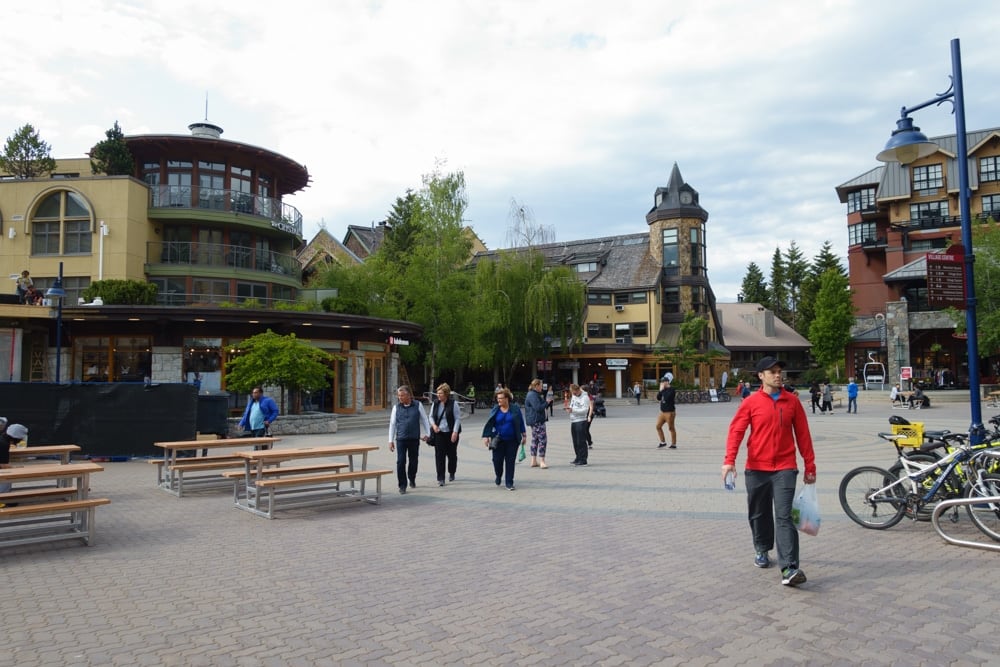 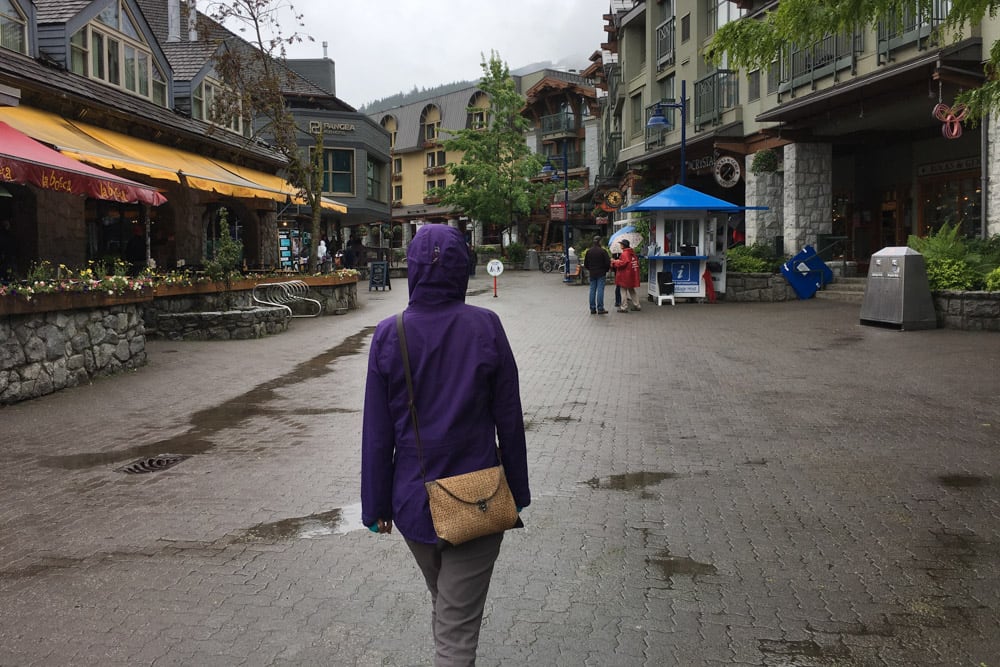 The other adventurous activity was mountain biking in Whistler Bike Park, which I've written a separate blog post about but if you want the short version: it was bloody brilliant.

Our final day in Whistler was a bit of a washout, but rather than just sitting inside we eventually decided to explore Whistler Village a bit more and book our coach tickets back to Vancouver.

Whistler has been one of the few places that has been high on my list of places to visit and the longest standing item on that list. I can confidently say that it lived up to expectations and the feeling of finally visiting a 'bucket list' location was gratifying.

Our final coach journey of the trip brought us back to Vancouver city centre after our short stay in Whistler Creekside and we had five more days left until we flew home! 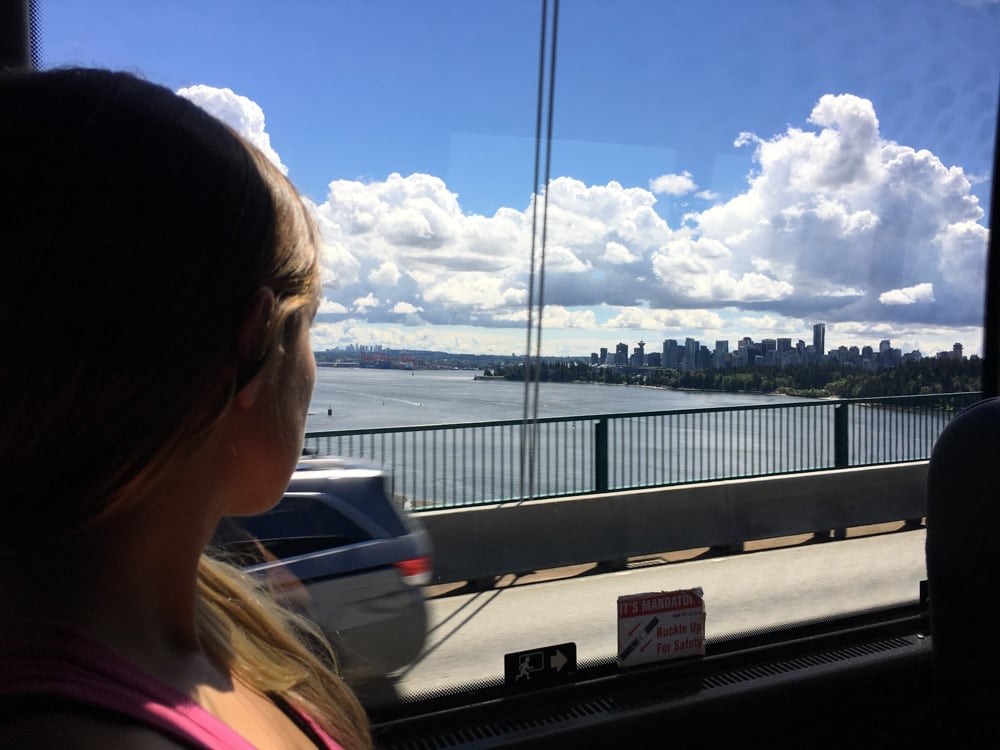 We arrived in the city centre pretty early after our 10am checkout and short bus ride, so we picked up an early lunch from Subway and sat outside some kind of government building with a big square/plaza outside and people watched. The whole time we were there a group of skateboarders were riding around doing tricks without anyone asking them to move on which surprised us both. A shirtless long boarder turned up and started rolling around the square in long lazy turns, dancing on his board as he changed directions.

We caught the SkyTrain to our Airbnb all the way out of central Vancouver in a suburb called Steveston. The whole area has a large Asian population and many of the stores in the area have both English and Asian writing on them. We stocked up for our last few meals from a Chinese supermarket, as well as ingredients we also tried a maple syrup Mars bar, which turned out to be out of date but I don't think it was very nice even when it was in date!

We had nothing planned ahead for our stay in Steveston, having not actually remembered which Airbnb I ended up booking! We took things easy by just exploring the local area on foot and finding some cool places to eat and a open air museum about the shipbuilding that took place along the harbour. 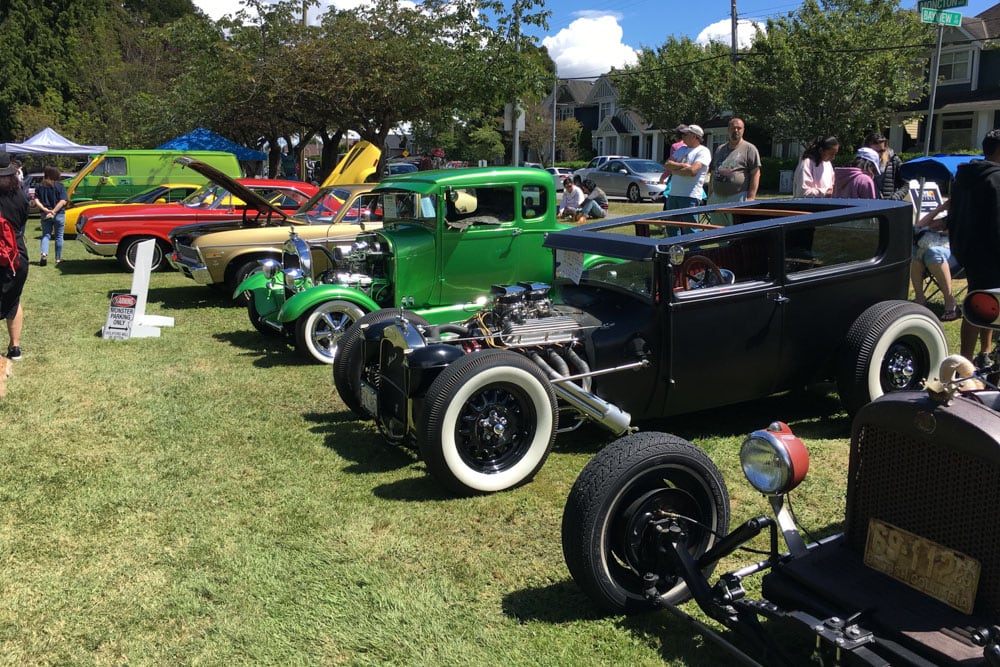 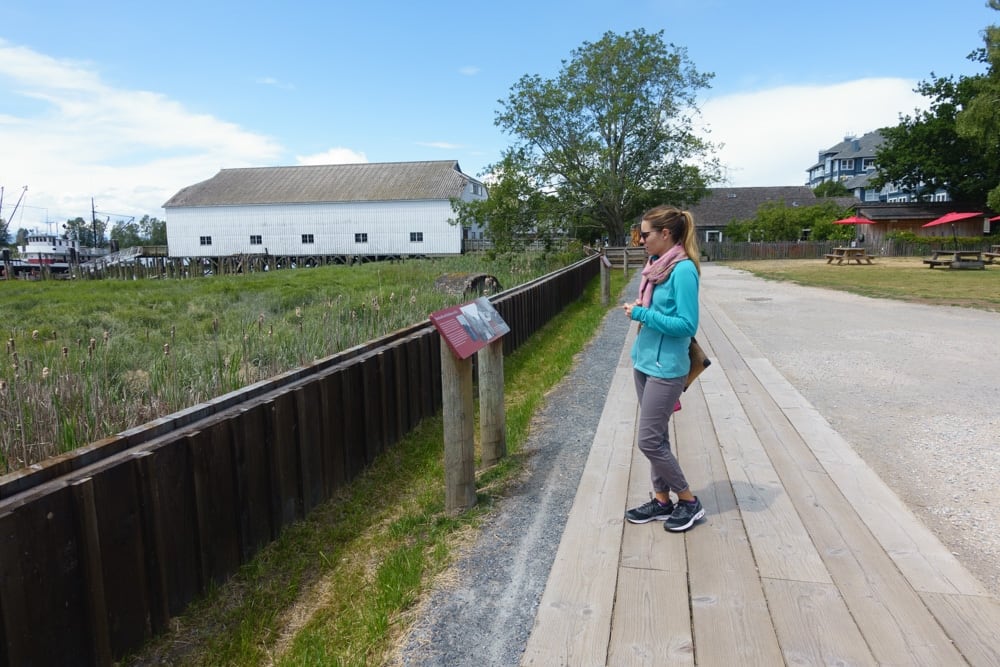 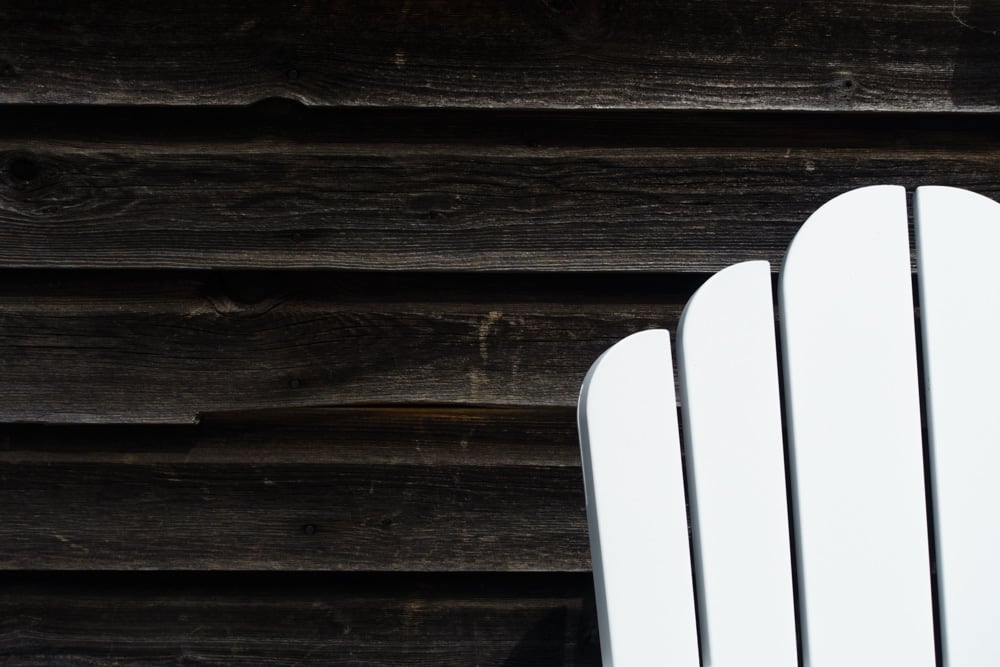 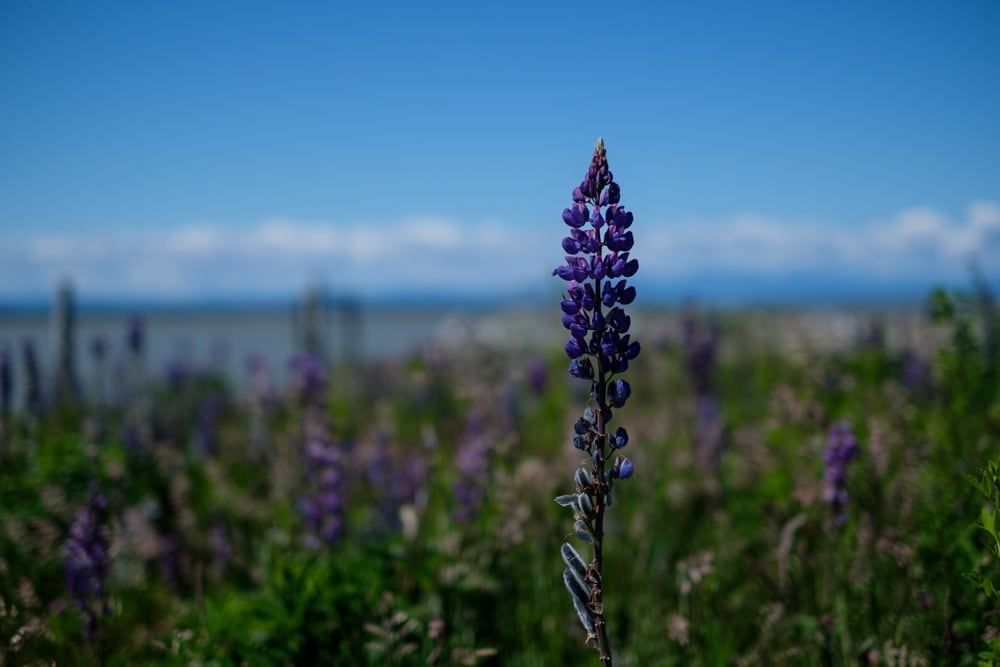 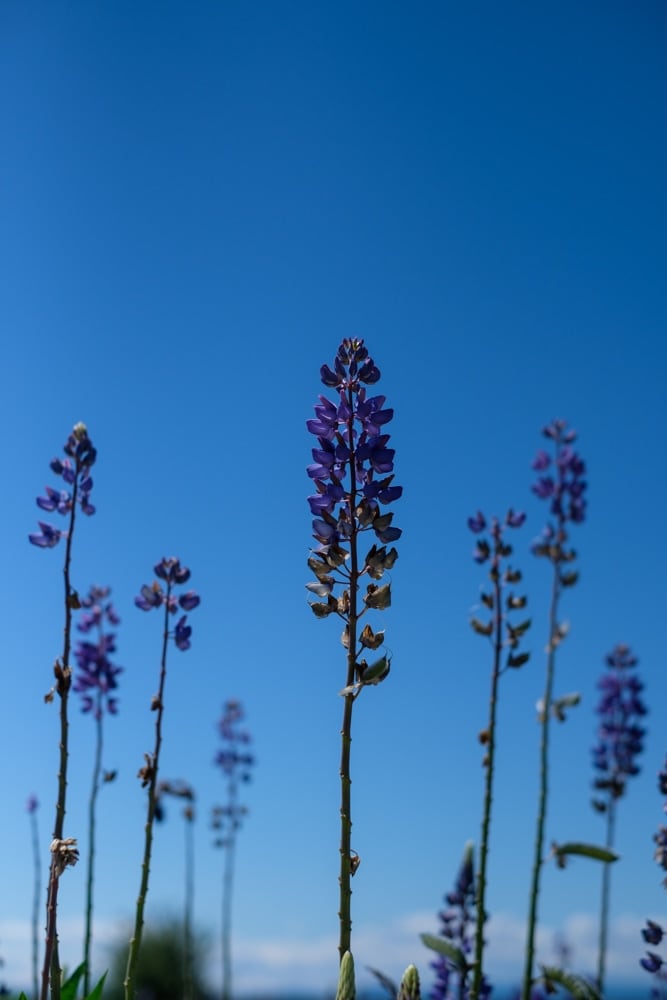 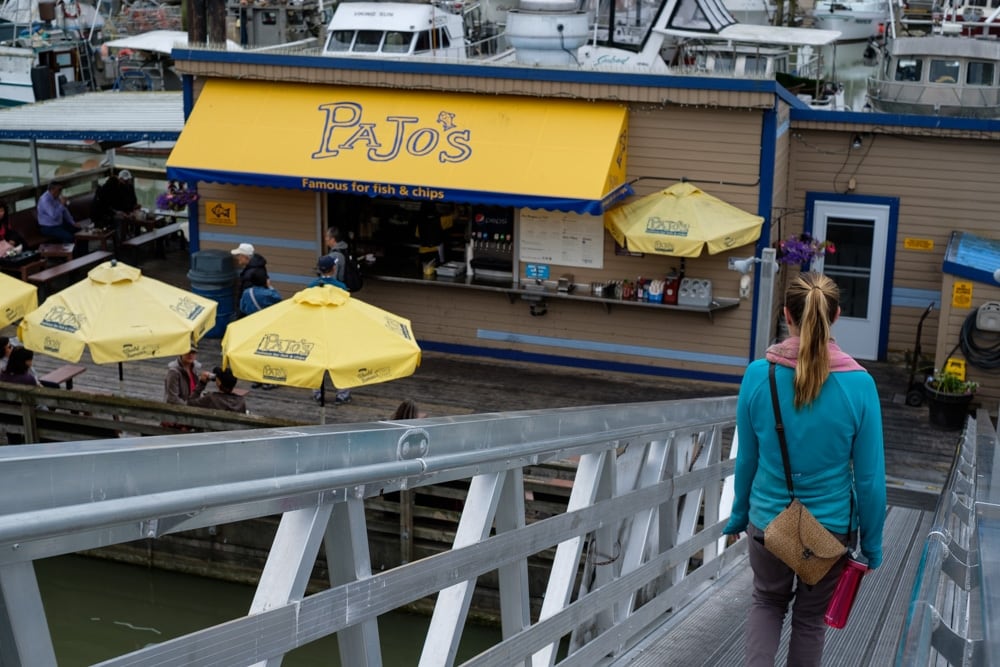 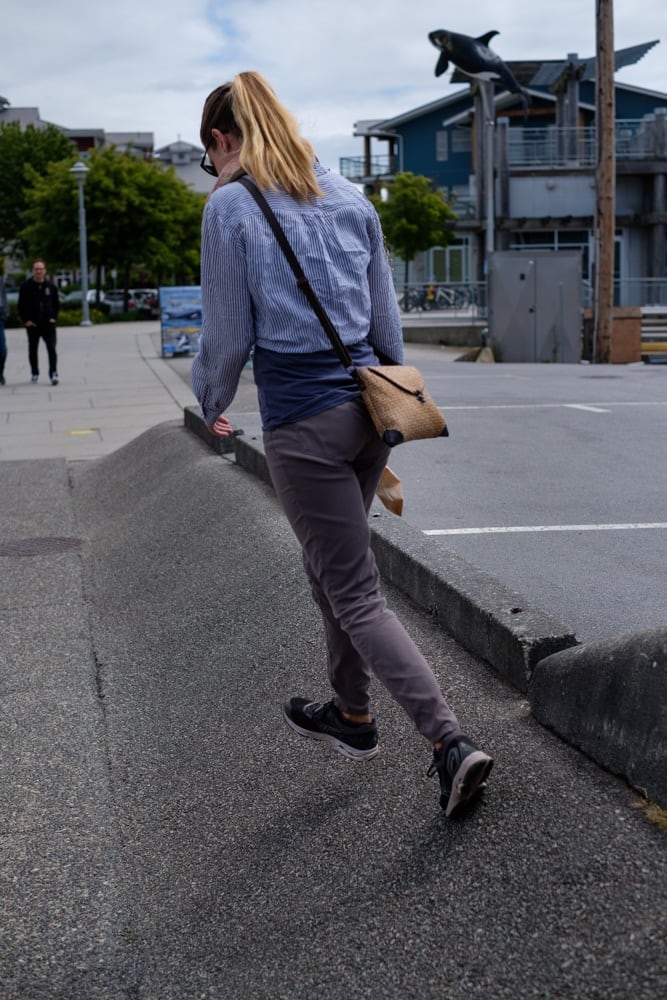 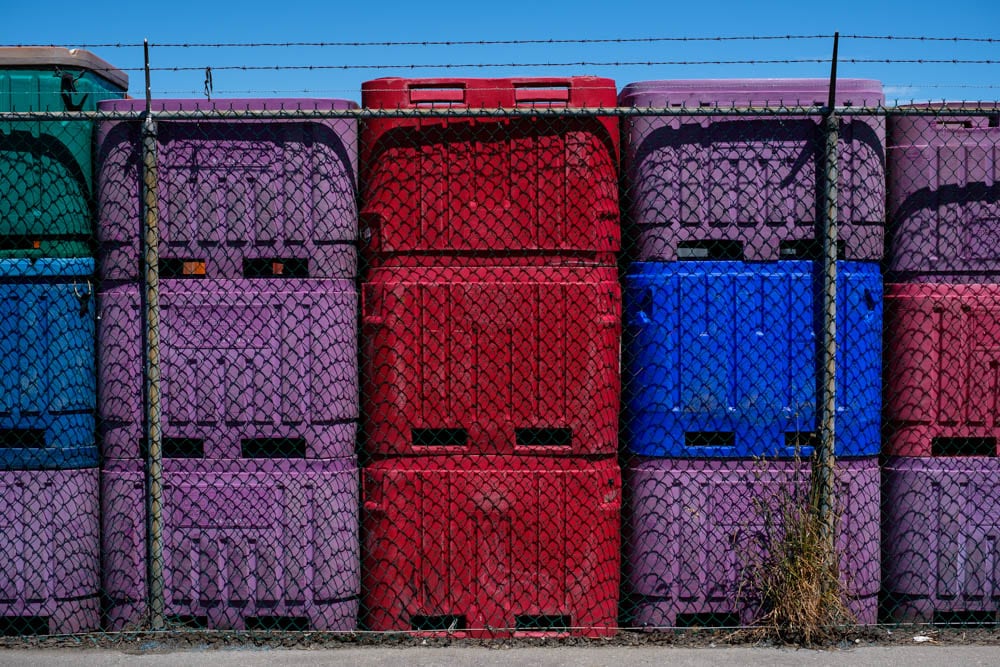 We bought pizza from a place that had pizzas that cost hundreds of dollars and got fish and chips from a fish & chip shop on a floating pontoon, we ate several times in the local bakery. Basically we ate a lot.

And just like that the last few days passed and we were heading to the airport to fly home, after catching the wrong bus and walking back to where we started we were on our way.

We flew, eventually, with Air Transat. I struggle to recommend them, while they were the cheapest ticket they had service to match. The check-in process was confusing and handled with little professionalism and we were delayed in taking off and in receiving our bags at the other end.

A weird, uncomfortable feeling creeped up on us that let us know our amazing year of travelling was at an end as we heard English being spoken in English accents and familiar surroundings greeted us.

We were met at the airport by Nikki's family and it was weird seeing familiar faces again. We've been back a while now and we're still adjusting. Look out for a follow up post where we'll try to sum up our year away and how it feels to return.

To understand how much riding in Canada means to me we have to go back about ten years. Back…

Squamish – Is that even a place?

When I first met Josh he was planning to go to Canada mountain biking, so I'd heard a lot…