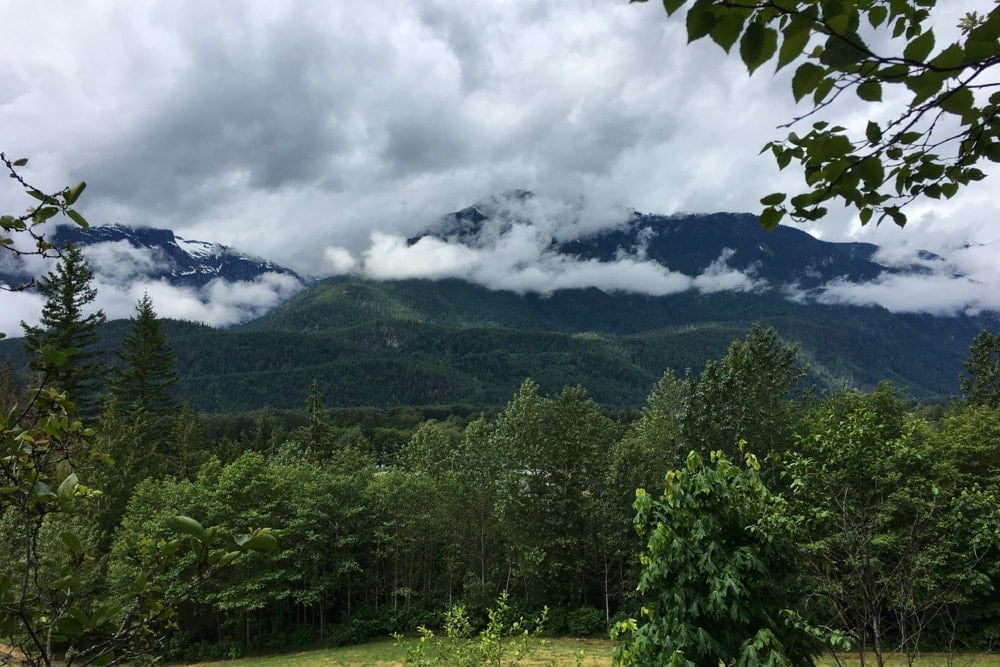 To understand how much riding in Canada means to me we have to go back about ten years. Back when I was fresh out of school and not planning to go to university but instead head to Canada for a gap year (or two, or three) spent living, working and playing in and around Whistler.

That never happened. Instead Nikki and I started dating and I decided not to leave for Canada. Not because I no longer wanted to go to Canada, but because I knew I'd found something I didn't want to leave behind.

The south eastern part of British Columbia from Vancouver up to Whistler and beyond is known around the world among mountain bikers as being one of, if not the best place for mountain biking in the world. There are three main areas of trails; Whistler, Squamish and the north shore of Vancouver where the mountains meet the city. Each area features in numerous bike films and countless YouTube videos of which I have watched plenty. 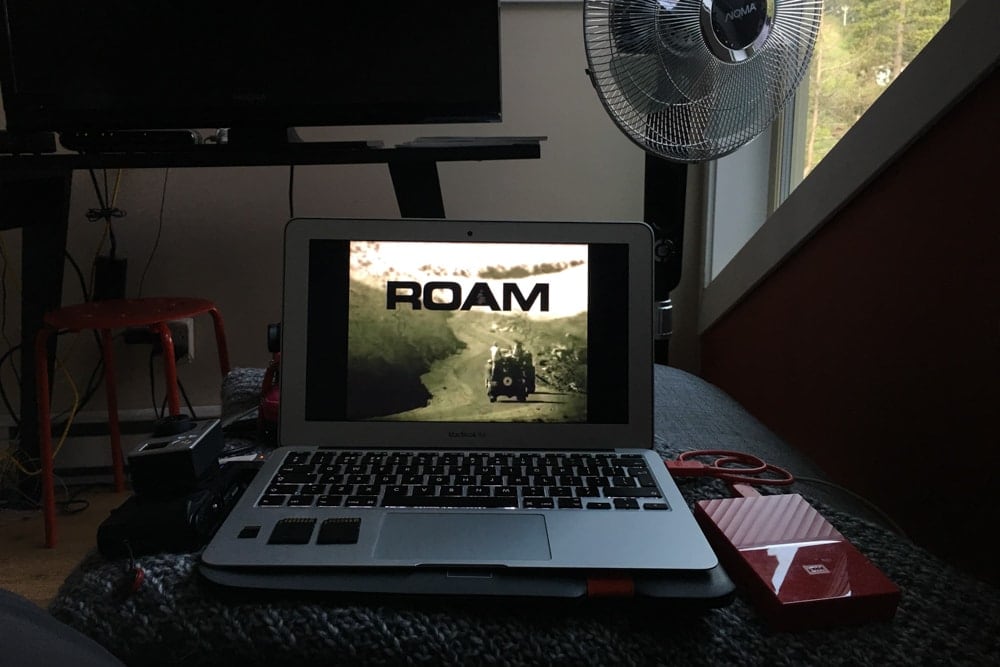 My first taste of what mountain biking in BC was like was from the film Roam by The Collective. The opening scene, shot from a camera descending through the trees, is of Darren Berrecloth nailing the last pieces of wood into a narrow wooden platform known as "North Shore" and then riding along it and into the rest of the segment. The riding and the filming of the 45 minute long film blew my mind and while it's aged it still conjures up those same feelings today.

To be honest I wasn't even planning to ride in Squamish, even though I knew the riding was world class the goal was Whistler. It wasn't until we'd been in town for a few days and I'd seen a steady stream of mountain bikers riding around that I finally decided to hire a bike. 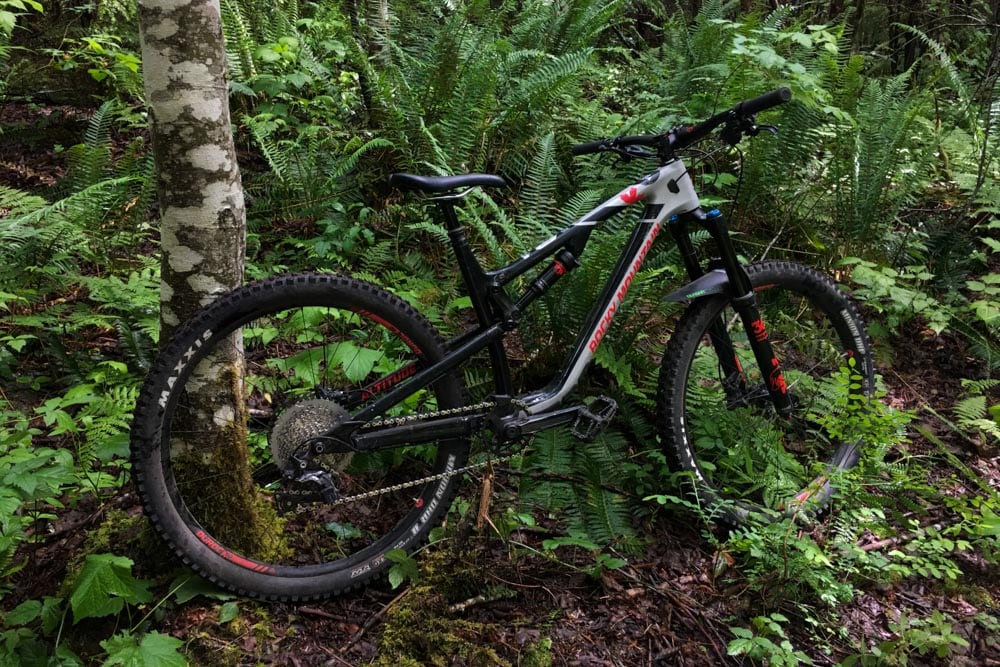 I picked up a Rocky Mountain Altitude from Corsa Cycles in downtown Squamish, plonked on my newly purchased $10 safety glasses from the hardware store and started riding to the trails. It was a fair ride for an unfit me on an unfamiliar bike all the way across town to the trails near Alice Lake and I was thoroughly warmed up by the time I got to the start of the off road climb. I looked up the rocky, wet climb ahead of me, clicked down through quite a lot of gears and started the slog up. 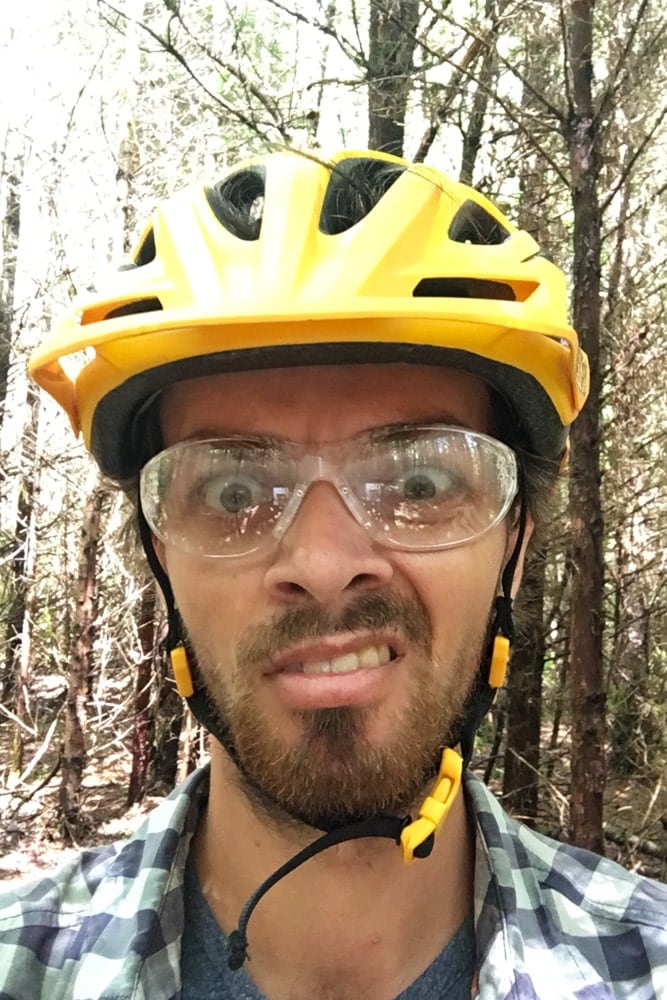 I made it to the start of a trail called Rollercoaster which me and Nikki had seen on one of our walks and had a little rest before dropping in. I gingerly turned onto the trail and pedalled to get a nice rolling speed…

I wasn't using a GoPro so you'll just have to take my word for it; OH MY GOD IT WAS AMAZING. I'd only ridden about 1km before it spat me out onto the road but wow it was such a good trail. A perfect mix of flowing smooth sections and technical ups and downs. I found myself pedaling and pumping to get more speed than I probably should have done on an unknown trail but hey I felt like I was riding in all those films I'd watched.

I only had time for one run of Rollercoaster before riding back to our Airbnb for lunch but I returned after wolfing down a baguette ready for more, if more than a little tired – ok, I was exhausted already.

I decided to ride Rollercoaster again because I didn't have the energy for much and it's always better the second time you ride a trail because you know what's coming. I carried more speed through all the sections, more confident that I wouldn't suddenly find a five foot drop around the corner. I nearly came unstuck at the end of the trail when my front wheel rolled sideways over a rock while I was riding around a berm (a banked corner) sending me off balance but I held on and grinned as I zoomed down the final steep bit and onto the road. 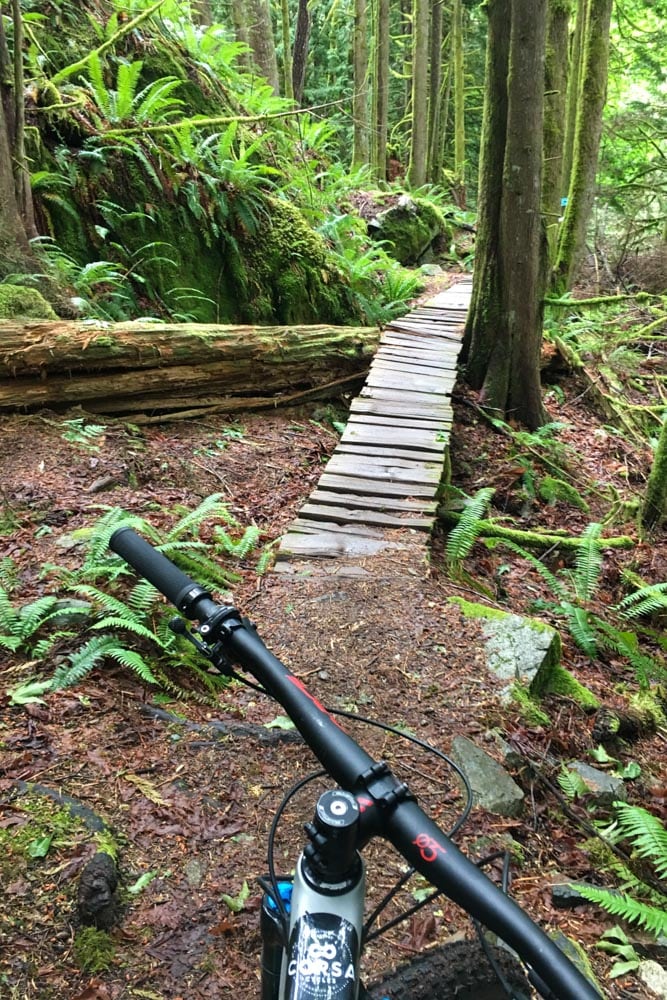 I was knackered but didn't want to ride home just yet so I rolled over the road to the start of Lumberjacks. I asked some people where it came out but they didn't know so I mentally shrugged and started riding anyway. Things didn't get too exciting for the first little while as the Lumberjacks bike trail followed a walking path. After a few hundred meters though it turns off and heads down along a technical, rooty, winding path. Careful not to catch a pedal or slide out on a wet root I caught up with some riders in front of me, a gentle climb and shallow descent spat us out onto a fire road. Already the trails here were more challenging than I expected from blue graded trails and were much more like red trails in the UK. 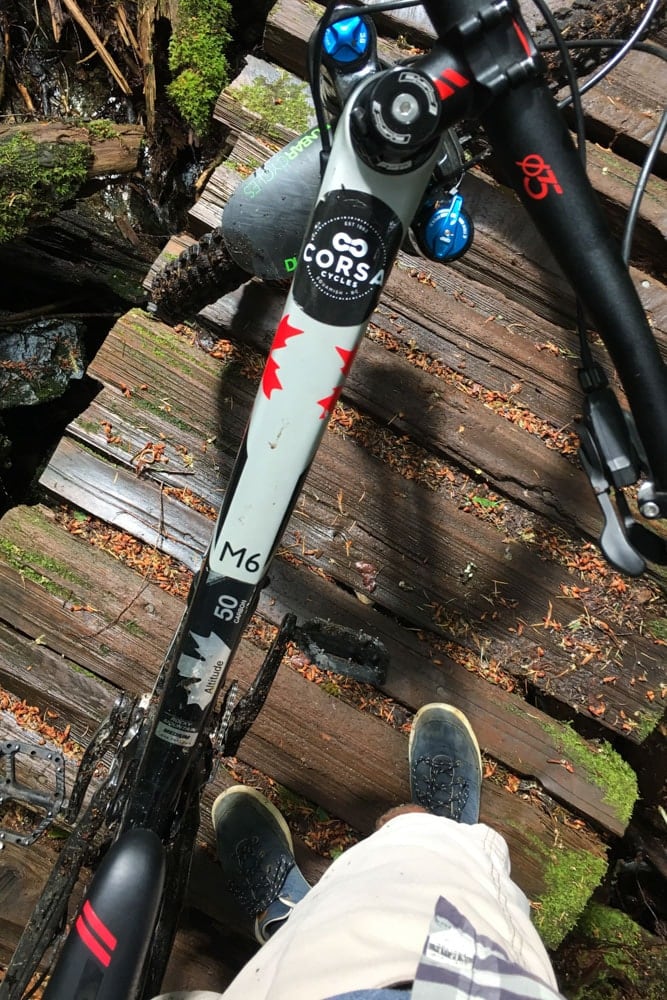 I was now in the woods somewhere north of Squamish and wasn't where I thought I'd be at the end of Lumberjacks. I did have an offline trail map on my phone though and wasn't too far from town – don't be that guy who really goes out without a map and gets lost. Rather than bother getting my phone out and breaking my experience of being outdoors by using my phone I asked the two women I'd caught up with what the best way was to town. They debated with each other and themselves for a moment and then said to follow them and they'd point me down a trail on the left. So I did and they did.

What they didn't tell me was that this innocuous little turning would turn out to be the most technical trail I've ever ridden! If I thought I'd seen roots before I was mistaken. I might have been out of practice but even so this trail was tough going, with flat pedally sections followed by rooty slippery descents and then a wet muddy climb thrown in. I had to put my feet down many times and push a few. I was absolutely loving it! I found some real wooden bridges just like the area is known for and challenged my technical riding abilities with a good few track stands and slow tricky corners. At one point I was rolling slowly down a short steep descent and found myself on a less than desirable line and had to stop, track stand and bounce my front wheel over a root and roll away in disbelief that it had actually worked and I was still upright!

The bike hire and glasses cost about £65 and it only took the first run of Rollercoaster for it to be worth that cost many times over.

With the bigger brother of the bike I hired in Squamish set up for me by Coastal Culture and my lift pass purchased I headed for the first technical challenge of the day; getting me and my bike onto the lift! 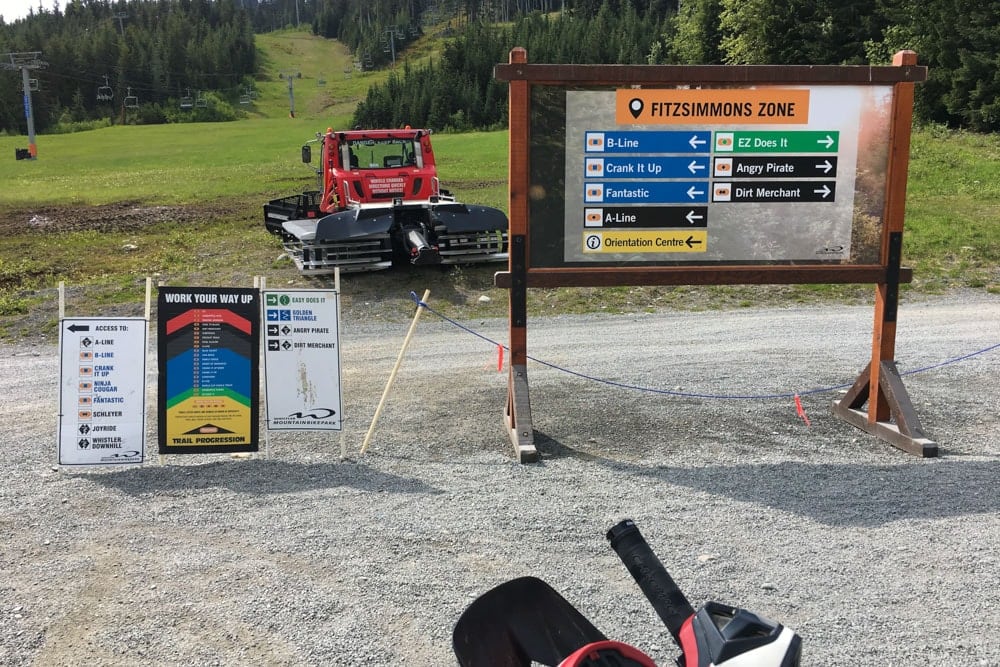 With little finesse I safely seated myself on the Fitzsimmons Express gondola and passed over very technical trails as I climbed. The top approached and my stomach flipped as I realised I'd have to ride back down. I took my time getting to the start of a trail, looking around and recognising various viewpoints from videos. Slowly I made my way to the start of a few blue trails where I sat pondering my options; "B Line" – jumping skills required, "Crank It Up" - jumping skills required or "Fantastic". I picked B Line and dropped in.

Thirty seconds in and already my smile was bigger than the mountain. I was taking it easy but the trail begged me to pedal more, go faster and have fun. Halfway down the cost of the bike hire and lift pass were forgotten, a distant memory compared to the thrill of riding a great bike down an amazing trail.

The Rocky Mountain Slayer I was riding was also forgotten, taking no effort to ride and dealing with the terrain handed out by Whistler Bike Park (WBP) with ease despite it not being a proper downhill bike. 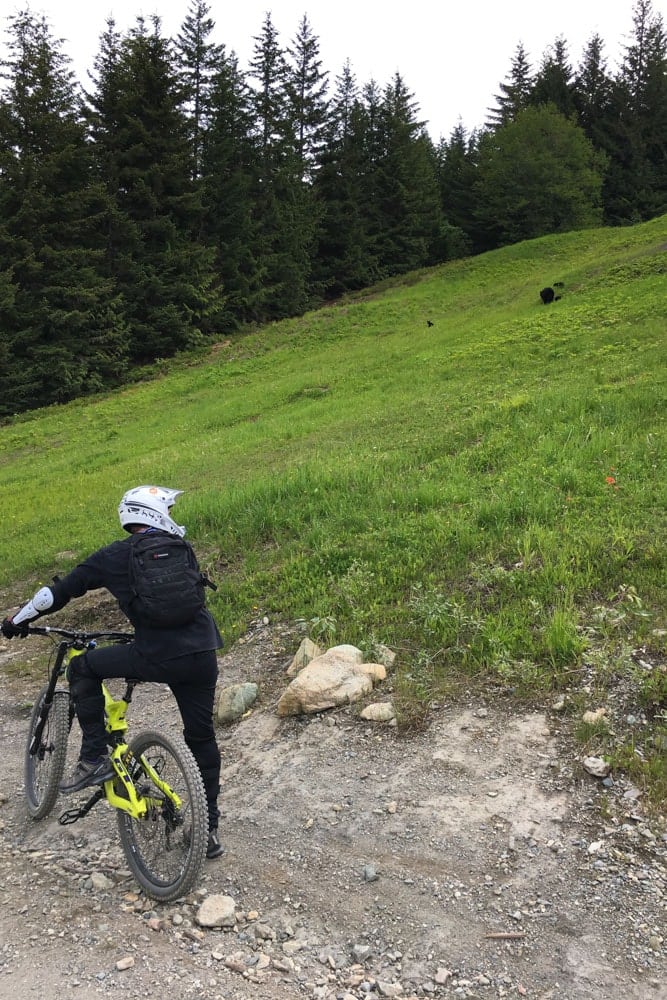 B Line is split into three sections and each is full of a great mix of fast flowy stuff and a bit of technical stuff. I got the to the bottom with aching hands from holding on and aching cheeks from grinning the whole way down. I did two more laps of different and equally fun trails before meeting Nikki for lunch. 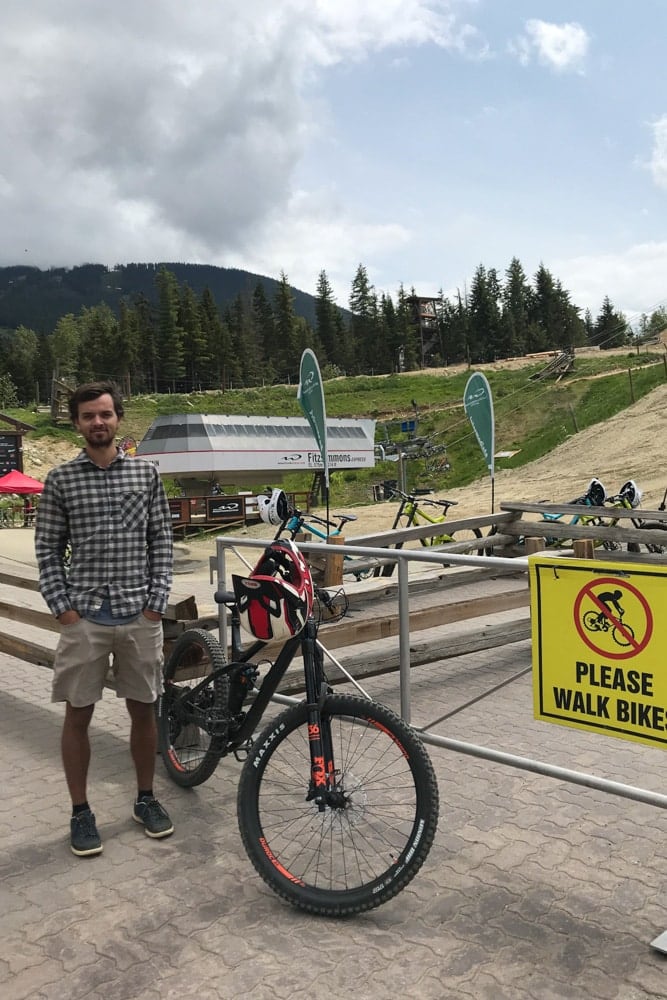 Then I made the mistake of trying out Crank It Up, a jump trail beyond my meagre jumping skills. Thankfully it can all be rolled but man some of the jumps are scary big. I made it down that and then headed back up for one more lap of B Line. 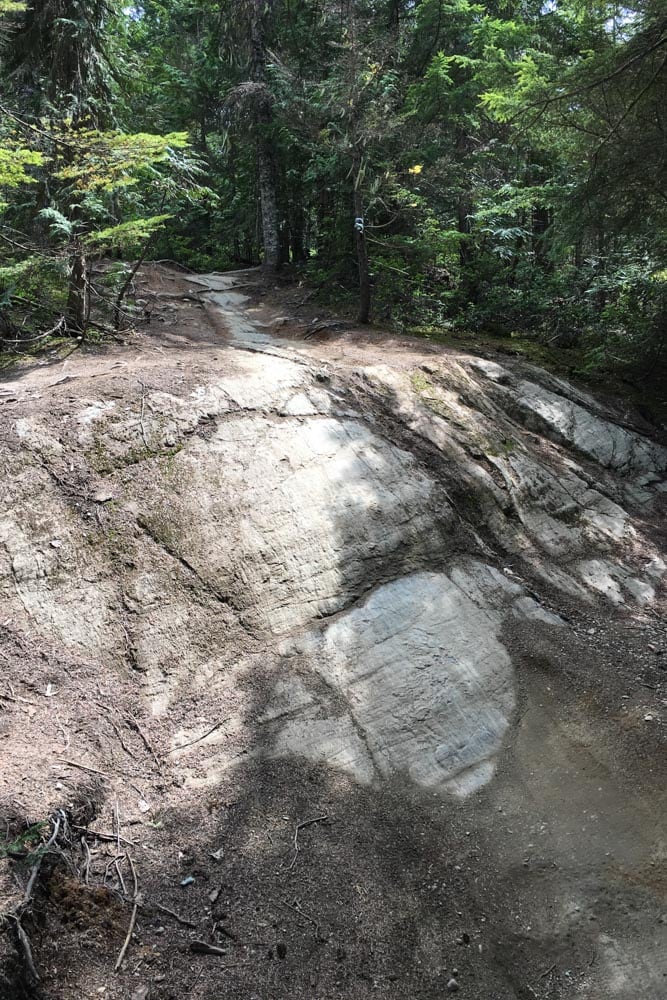 The first and final runs of B Line were laughably different. Where before I had no idea what was coming so had to play it safe the last run was so much faster because I knew the trail. I still suck at jumping but I was riding fast enough that I had to make an effort to keep my bike on the ground or close to it over the jumpy bits, pulling up on the take off and pumping down into the landing area to give me a speed boost. 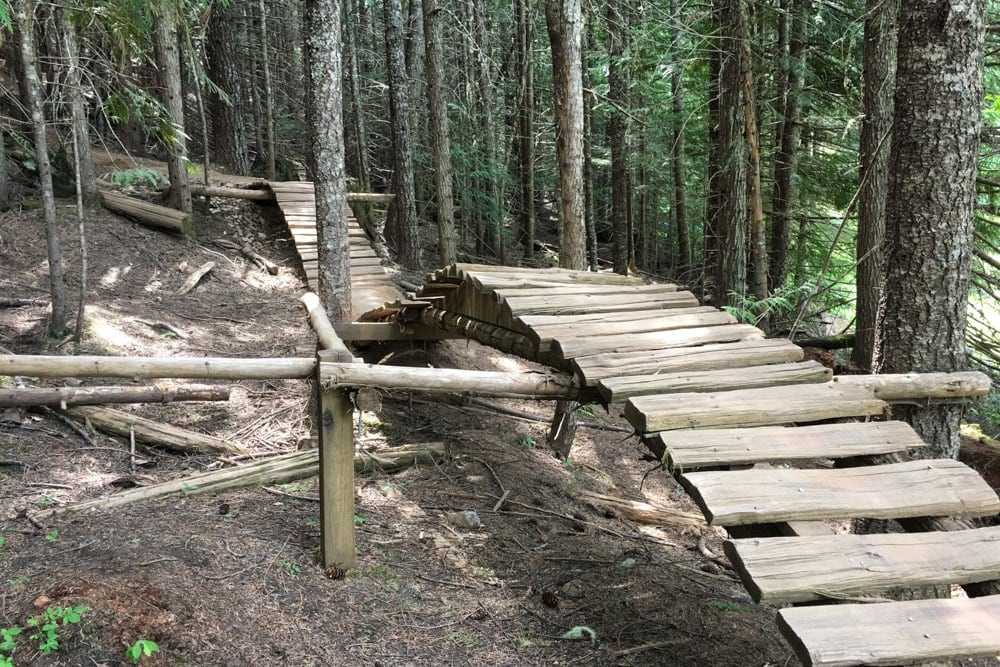 I skipped the very last section of B Line and took a detour to some slower and much more technical trails. With rocks, roots and trees to dodge this kind of riding is more what I'm used to and I weaved my way down the thin, rough trail with (I think) relative grace. Right near the bottom and having decided this would be my last run of the day because I was getting tired I thought I'd give a black run a try. I can ride black graded trails in the UK and do so without too much fuss but wasn't sure what Canada would have in store. Cautiously I put a few cranks in and rolled in to a short but technical black run with an off camber rock face and loose stone everywhere. I held on, questioning how I was staying upright and made it out of the trees and onto the final section into the village.

Mountain biking in Canada has been at the top of my list for a long time and I can happily say that it more than lived up to my expectations. The only problem I have with it is that I now want to go again!

Maple syrup is good but there's a limit – Whistler & Vancouver

This post has been a long time coming, we're now home and have been moving house and kitting out…