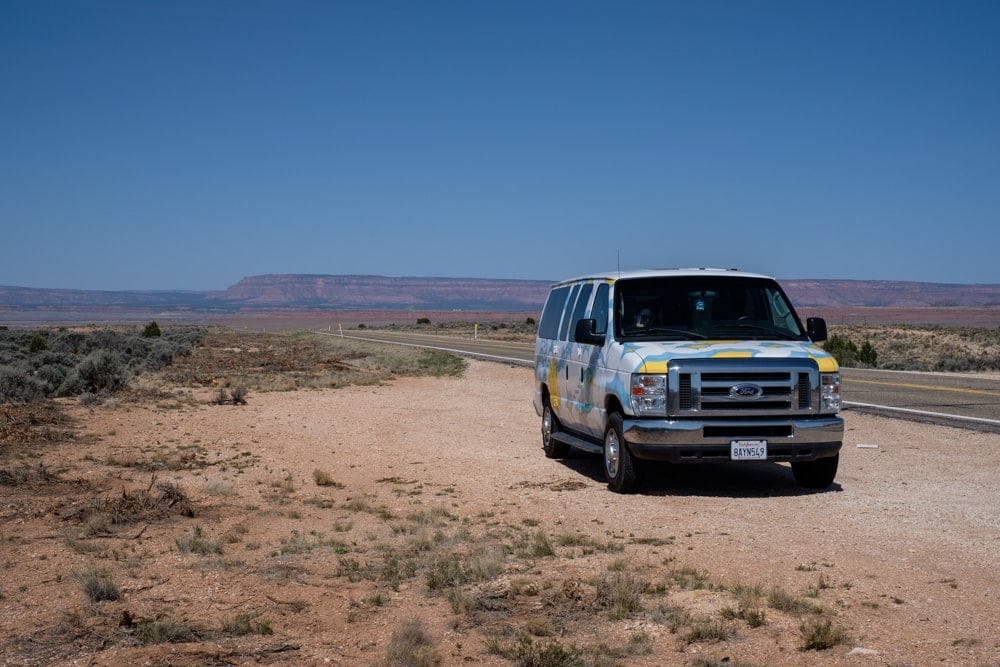 Why we booked Escape

I'll start off by saying that the USA is HUGE, and therefore it really is recommended that you have your own transport to get around easily whilst you're there.

Our first reason to book with Escape was that we researched the easiest and cheapest way to travel up the west coast of America and found Escape Campervans to be the answer. Originally we thought that our travel insurance would be enough to cover the van and third party liability insurance, but in the end the terms of American vehicle insurance are different to that of Europe so we decided to just fork out for the full Escape coverage. This meant that we ended up paying £69/$97 a day for the vehicle which still worked out cheaper than other camper companies. 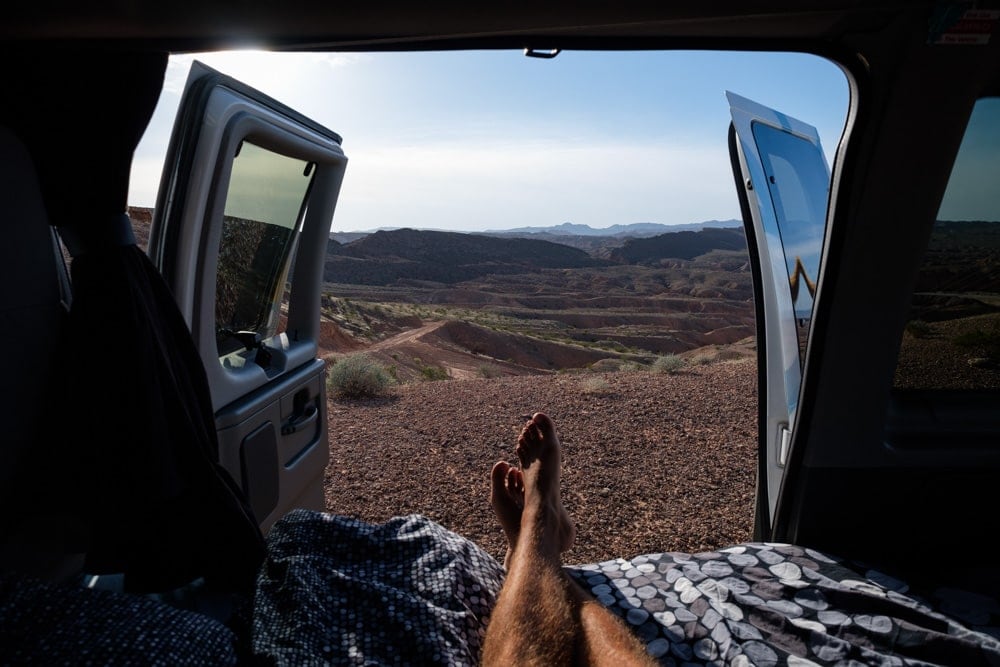 Escape also give you 100 miles a day in their basic rate so our time frame of 46 days to get from LA to Seattle with a detour to the Grand Canyon was totally doable without getting charged another hidden fee.

Our second reason to book with Escape Campervans was the cool artwork on their vans, just check out their site linked above if you want some idea of what other vans look like. We'd heard that you could pick the van you wanted out of the ones that were at the yard, this didn't happen to us but we did get 'The Cardinal' which had cute artwork and we were happy to drive around in it. 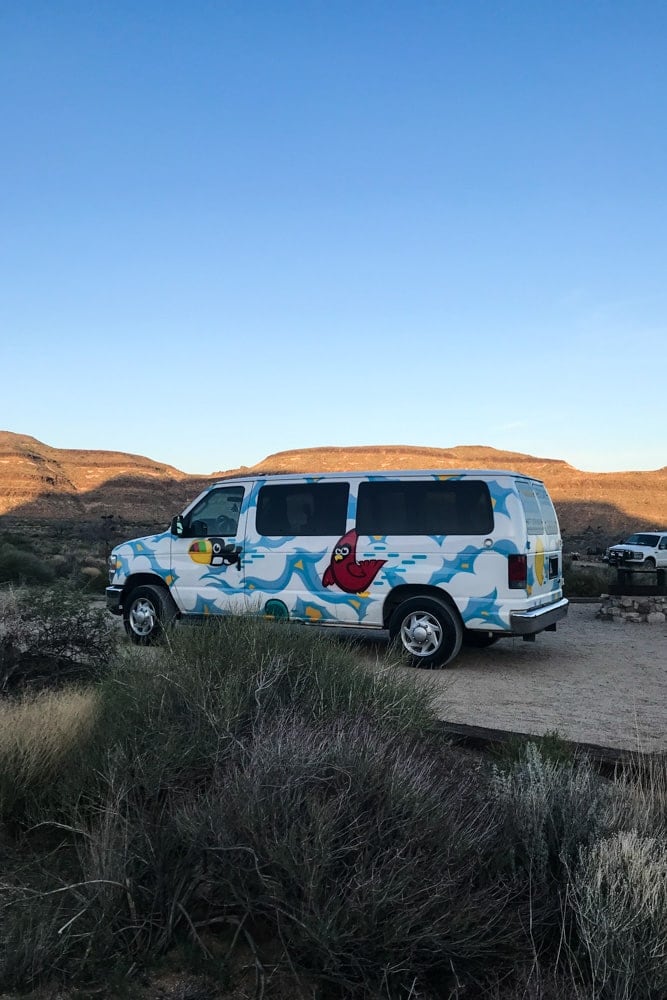 Booking was pretty easy and was done online. You select your pick up date and location followed by your drop off date and location to then get a quote for their vehicles. Once you've got a quote for the range of vehicles you then pick what you fancy, we went for the Mavericks option (a Ford E150 van) as it was the only one available but turned out to probably be the best option for us anyway.

After you've picked your vehicle you add on any optional extras, fill in your personal details and then pay a holding deposit. We didn't get any of the extras, although we did later add on insurance after we checked our World Nomads travel insurance policy wording.

Picking up the Escape Campervan

Pick up was super easy, especially as we had the full insurance option. We were dealt with by a very laid back employee who took copies of our driving licenses, checked if our route would require snow chains (we adapted our route so we didn't have to drive in snow chain areas) and got Josh to sign for the responsibility of the vehicle.

Once the signing of paperwork was complete and the rules of driving their rental van was explained to us we were taken out to see our home for the next 46 days! We were introduced to 'The Cardinal' (all their camper vans are given a unique name). First we did a body work damage check, however the laid back employee said we didn't need to really bother as we'd gone for full insurance so she didn't mark down all the scuffs and marks we pointed out. Then she showed us the inside, she showed us everything that was included in the kitchen then showed us how to set up the rear area into the bed. 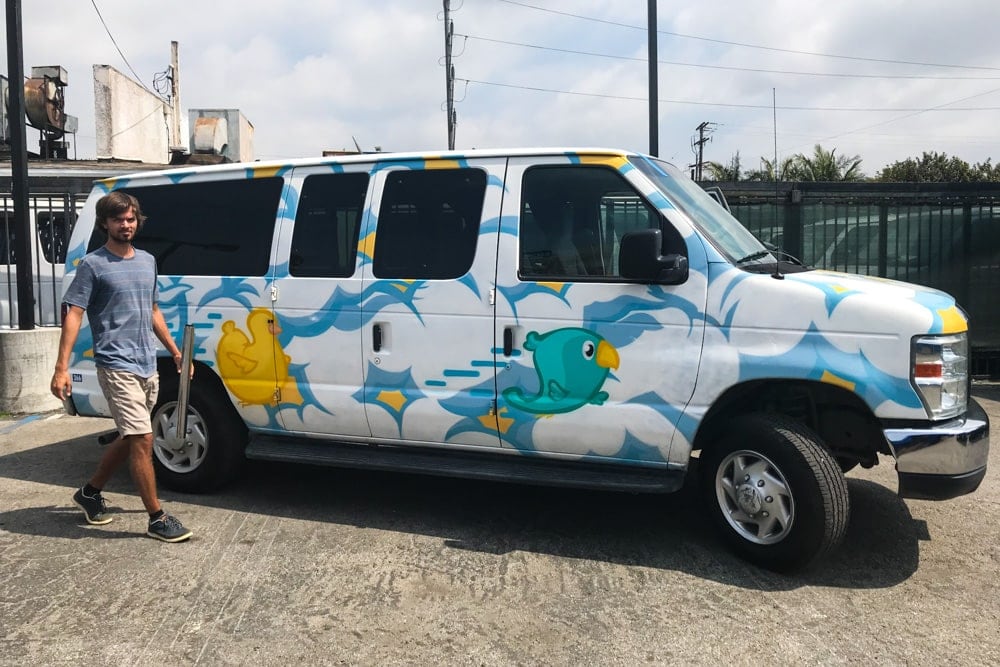 We were then given two sets of keys and left to it! Arghhhhh. Overall I think the process took about half an hour, but that's because there's quite a lot of rules to go through and the staff were doing more than one job at any time.

What the van had in it

The Escape Mavericks had three main areas; the front driving area, the main rear area which can be set up as seats and a table or a full queen size bed and then the rear kitchen area.

So now I'll take you through each area individually.

Front of the van: The front of the van was what you'd expect from a camper van but to us it felt HUGE. There were 2 seats with arm rests and a massive space between them, if you reached your arm out straight towards the other passenger you couldn't reach them. There was air con, a radio/CD player, automatic gearbox, a foot parking brake and quite a few cubby holes to hide stuff in (we ended up collecting wrappers and rubbish in them whilst we were driving). We didn't use the radio/CD player so can't comment on its quality but instead used Spotify and our UE Boom 2 speaker which we kept in one of the cup holders which we would highly recommend. 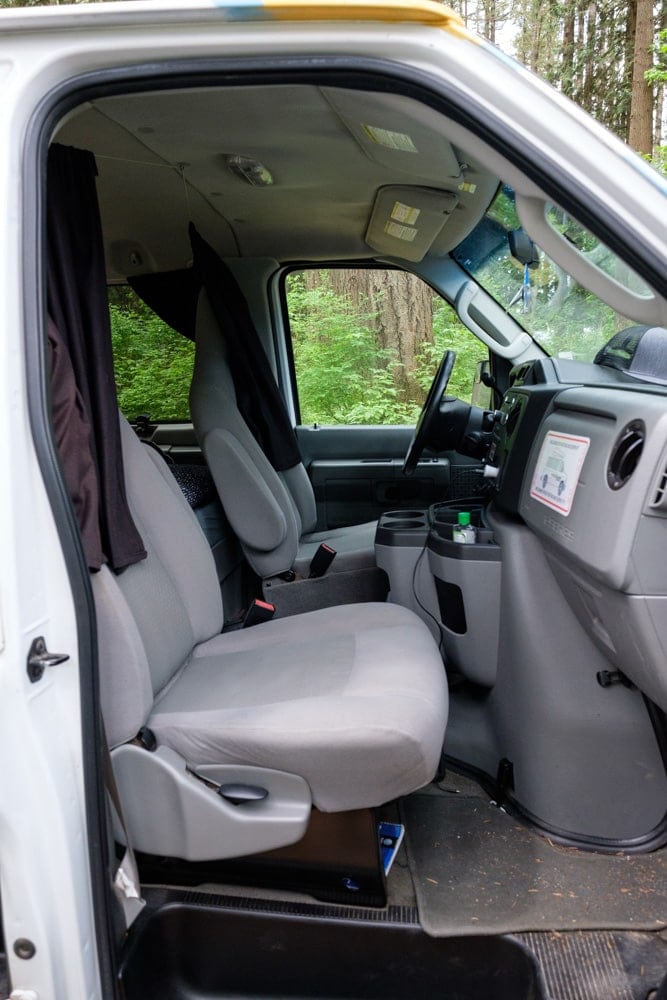 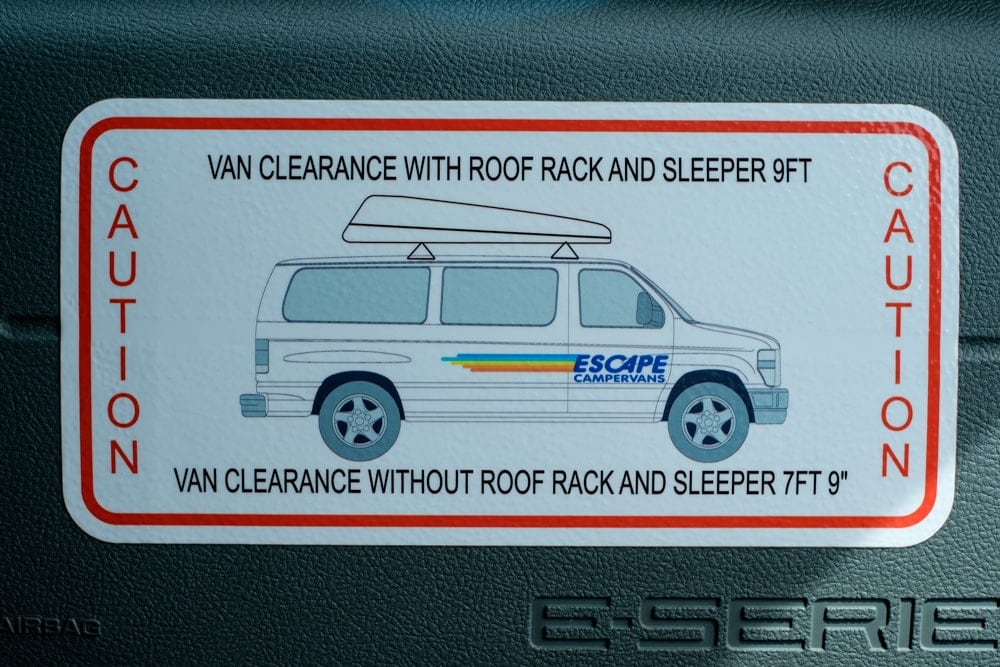 Main rear area: There were 3 seats back here that had seat belts. Whilst the seats were in sitting position you could insert the pole and table top to make a table which you could sit at on the seats or on top of the storage unit directly behind the driver seat. However, we chose not to use this set up as the bed was a bit of a pain to set up and it was easier not to break down the bed everyday. So instead we kept the rear seats folded, used the table top and the foam padding to make a queen size bed. It should be noted that you are provided with bedding, but not towels so you need to provide your own. In the main area there was also a lighter which could be used for power, cubby holes along one side, two storage units and very dark curtains. There were lights in the ceiling but they turned off after ten minutes of the door closing so they're not great. There's also a strip light above the kitchen but if you point it towards the main area then it points in your eyes and isn't a great experience so we just didn't use any of the lights. 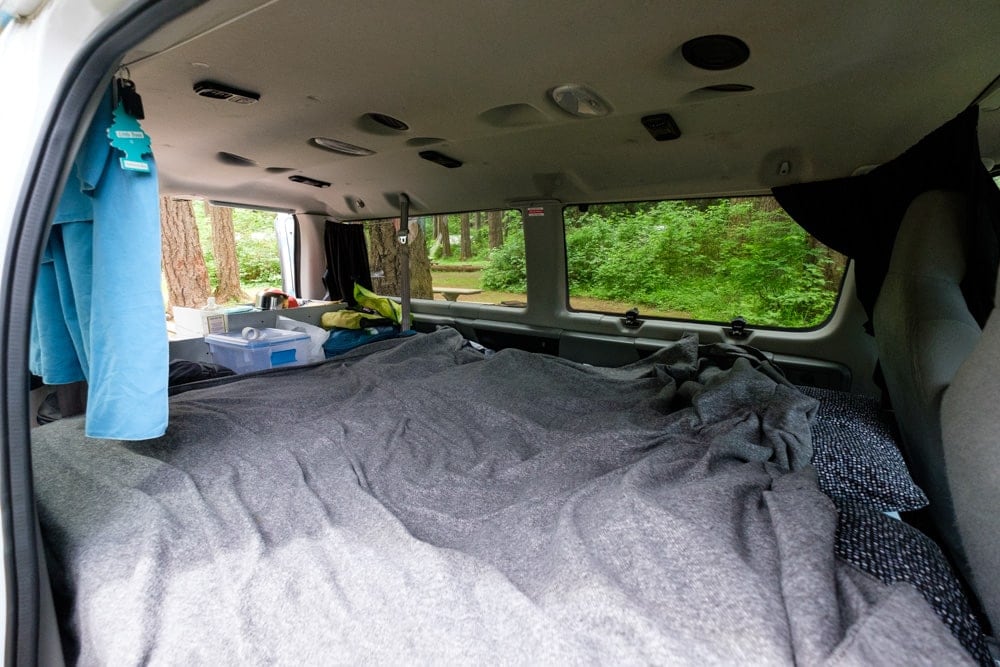 Kitchen area: In the kitchen area there's a stove, a pump lever sink which has a water tank and grey water tank attached to it, a fridge and storage. Escape Campervans provide you with the basic equipment to make a meal in your camper van as well as some other useful stuff which I'll list below for convenience: 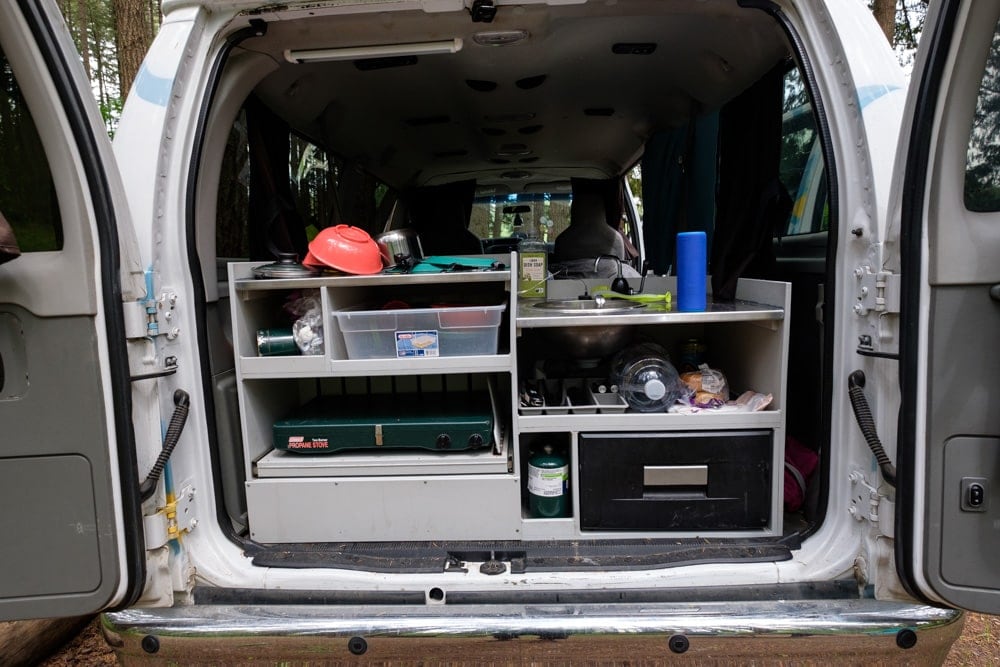 Pros and Cons of the Escape Mavericks 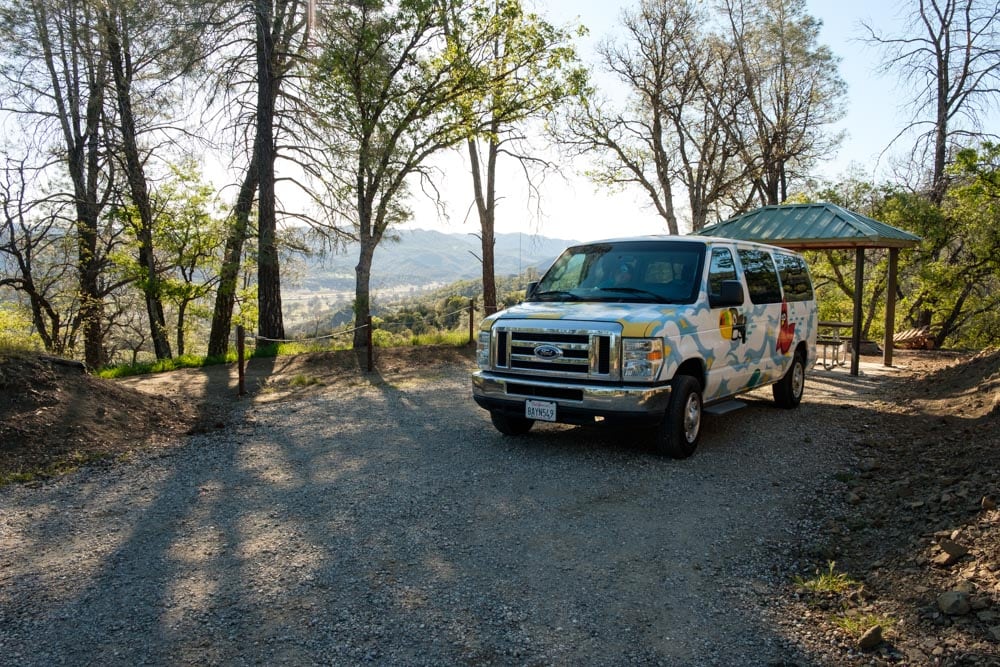 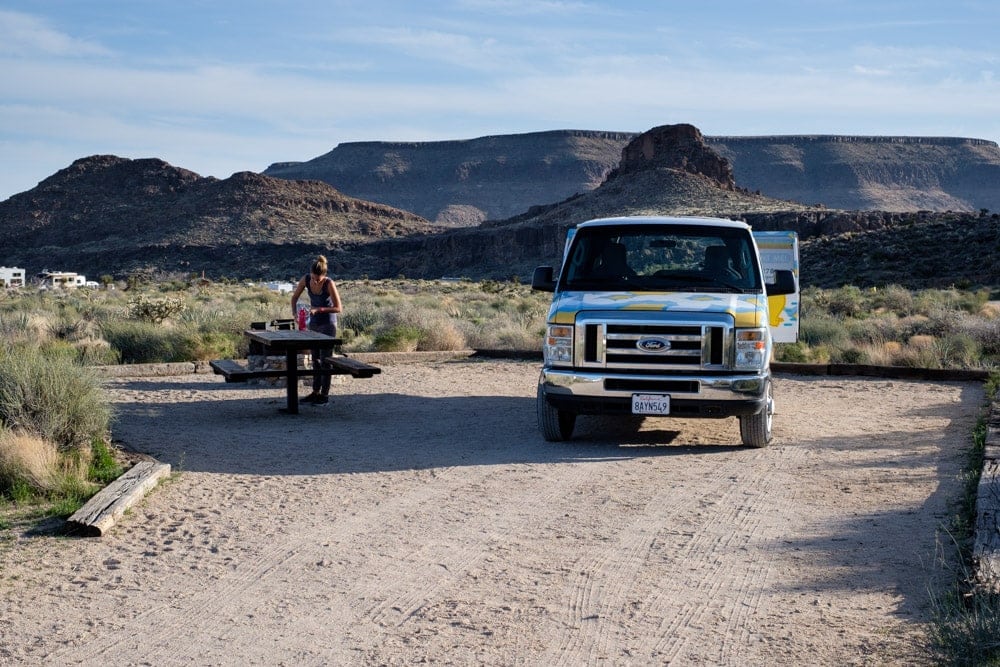 Dropping off the Escape Mavericks

We dropped our camper van off at the Seattle branch of Escape, they were super efficient. Before we'd even got out the vehicle the member of staff was asking us if there were any problems we needed to report and checking out the condition of the van. He completed the paperwork whilst we packed the last of our things up and said we were ready to go. They also had a box where you could put any left over stuff you didn't want any more which is useful for the next campers! 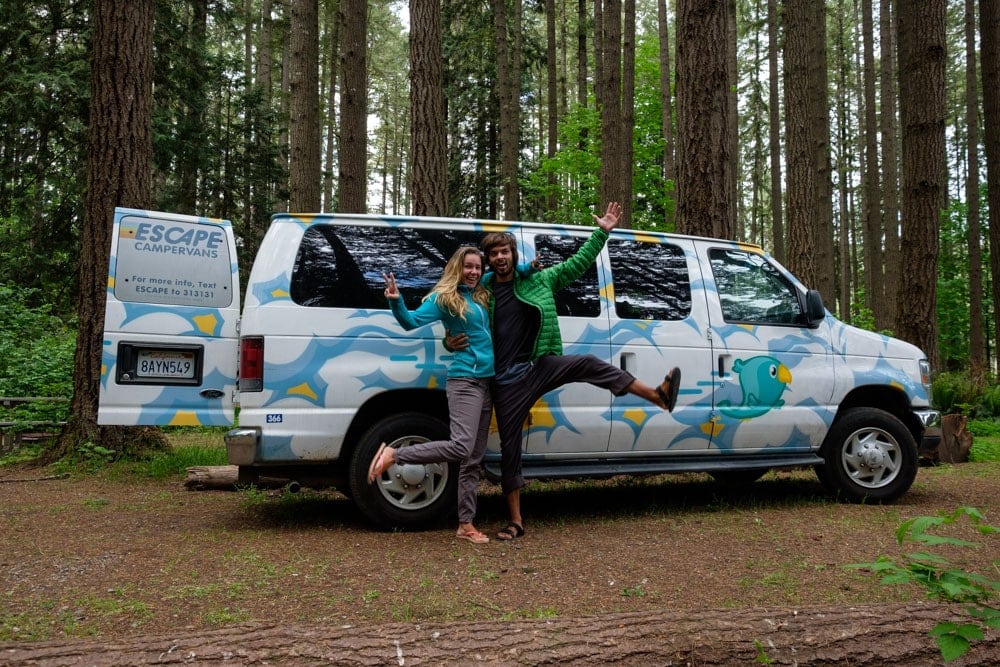 Overall we were really happy with our choice to use Escape Campervans for our American road trip. The company seemed reliable and the van was in good shape. We made some great memories on our road trip and would recommend it to anyone, just be wary of where you're parking! If you want to know where we camped then just check out our blog posts during our time in America.

So for our last two weeks in America we had picturesque views a plenty, lovely campsites and a generally…