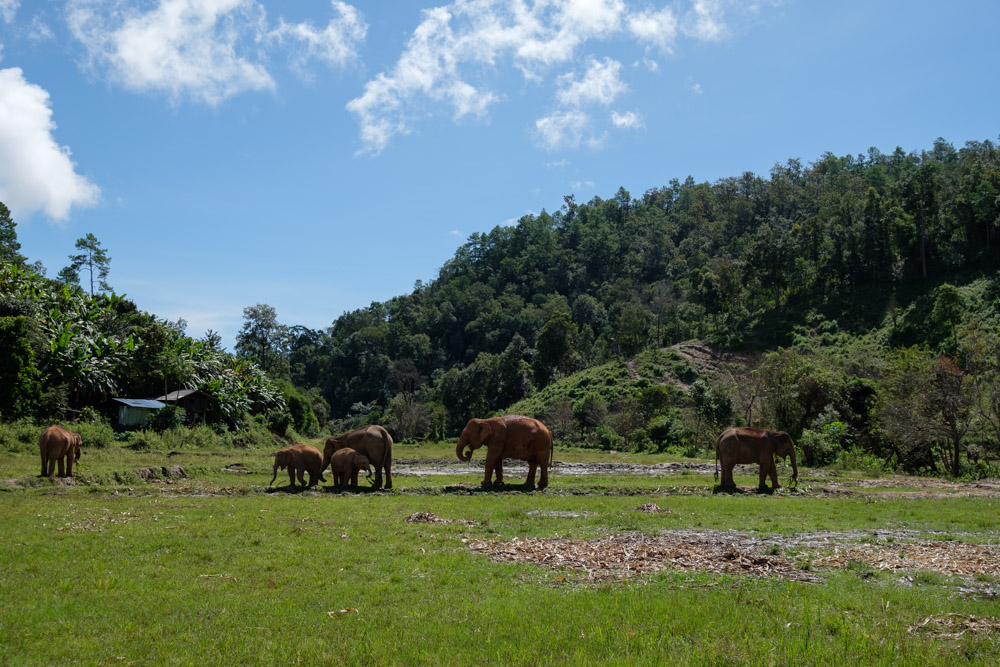 I'm going to start by saying I don't think I've ever done so much research in my life for a day activity. On a previous visit to my nan's house she had shown me photos of her and my grandad's visit to Thailand which had included photos of them visiting elephants. I knew that when we visited Thailand I also wanted to see these gentle giants, but I wanted to make sure that we did it in the most humane way possible.

When we got married we were lucky enough to receive wedding gift money for our year of travelling and we have kept the money separate to spend on amazing experiences, we decided that seeing elephants would be one of those wedding gift experiences.

Unfortunately everywhere we go in Chiang Mai there are tourist information points selling elephant experiences which involve riding. It is now well known that elephants backs are not made to carry weight and riding them causes long term damage to the elephant. Therefore, that was our first requirement – no riding. Our second requirement was that the elephants were in their natural environment – no enclosures, plenty of luscious green space to roam around in. I didn't feel that I could get honest advice from the tourist points so I chose to do the research online. I had found two places I felt comfortable with – Elephant Nature Park and Elephant Jungle Sanctuary. After flipping a coin (which most of our decisions are based upon – coming travelling for a year was one of those decisions!) we ended up booking a day trip with Elephant Jungle Sanctuary.

The day started with an 8am pickup from our accommodation in a pick up truck with benches in the back. The pick up truck then drove around Chiang Mai picking up other tourists that would also be on the day trip with us – there was a whole bunch of nationalities and ages. It was nice to meet other people, something we hadn't done since Archelon really. 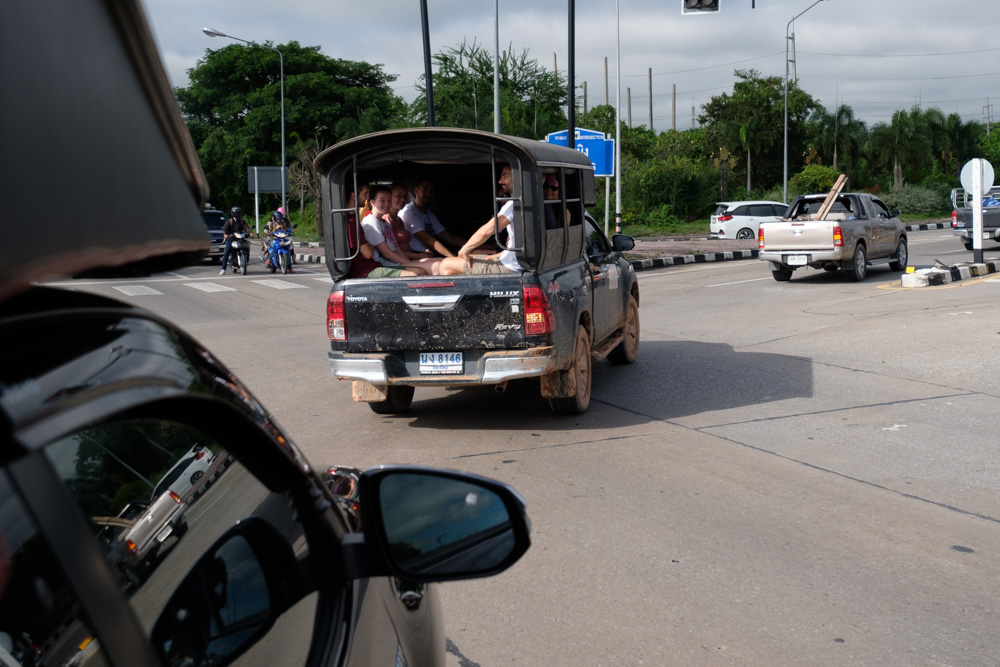 We left Chiang Mai with a fully loaded pick up truck, not just with people but with what seemed like fresh fruit and veg – we were all hoping the food was for our lunch! The journey was quite a long one – about an hour and half. This was a good sign to us, it meant that we really were driving out to the elephants rather than the elephants being brought to the tourists. During our drive we went past elephant camps which had ladders for riding and tiny enclosures for the elephants, silence fell upon the passengers of the pick up truck as we saw some of the awful conditions that elephants were kept in and we hoped that the elephants we were going to see had better lives.

The last 15 minutes of the journey however was rather scary! It involved going off road with a steep bank on one side and extremely wet mud that was slippery. All Josh kept saying was "Woah!", "They're doing this in just road tyres!", "Did you feel that slip?" [It wasn't scary at all, it was fun! – Josh]. It wasn't exactly helping my fear at that moment nor the lady next to me who was petrified of heights [It wasn't that high – Josh]. 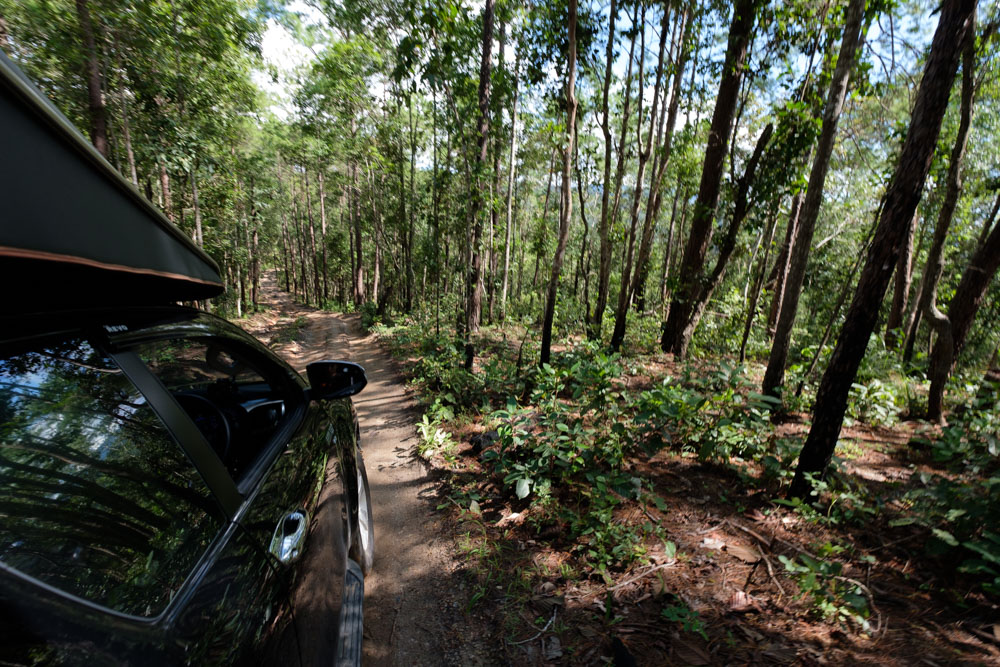 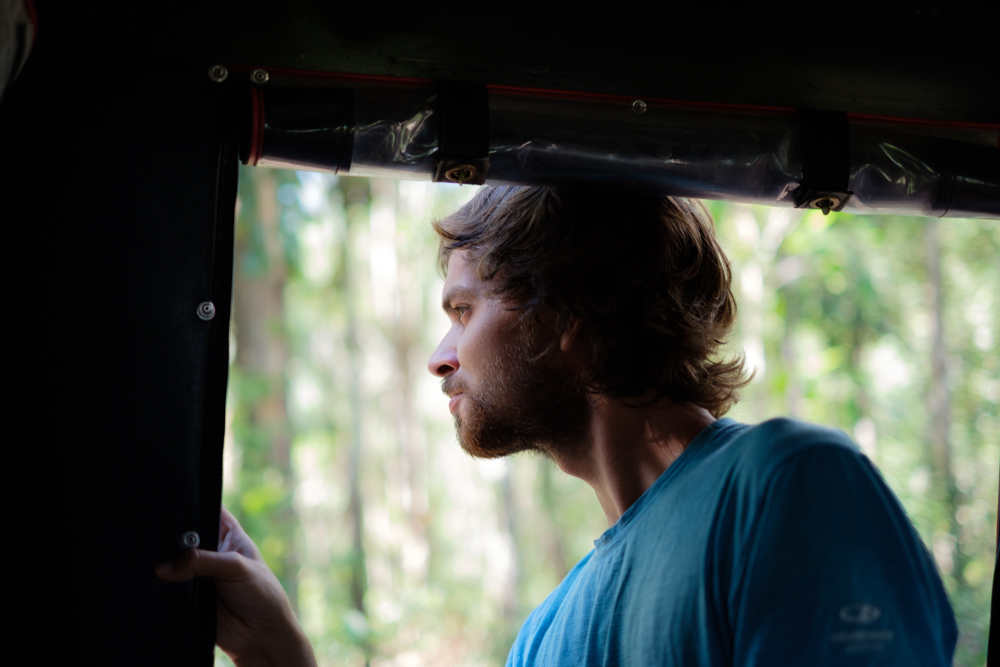 With great relief we pulled up at a dead end, even the mud pool that we had to jump into to get off the pick up truck didn't spoil my relief. We walked through the mud to get to camp seven where we saw female elephants of varying ages. When we got to the camp that Mahouts introduced themselves, we put on Karen tribe tops and learnt about the Asian elephants. So far so good. 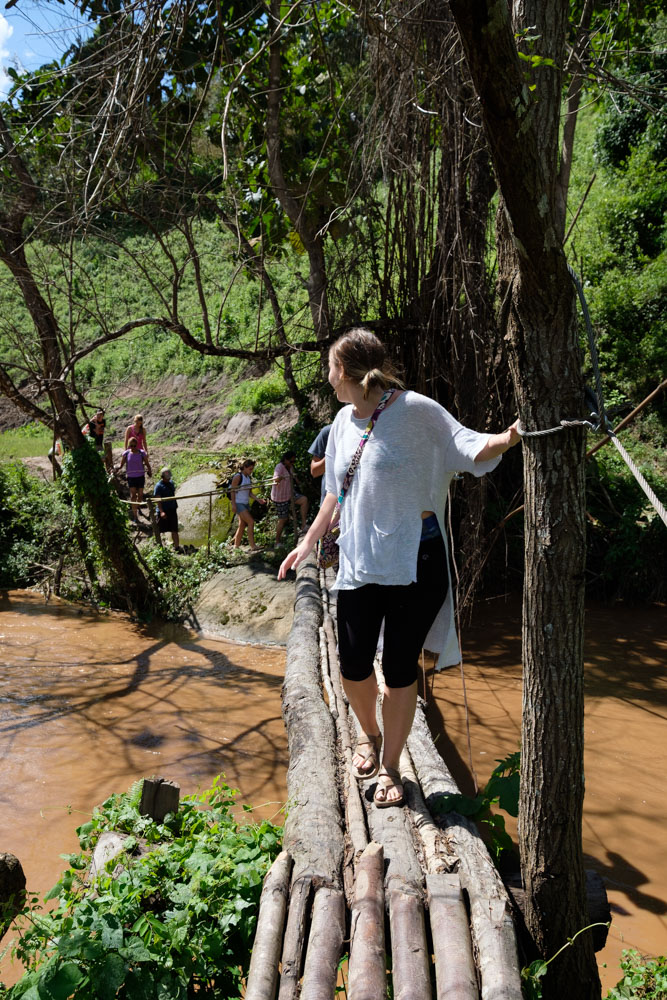 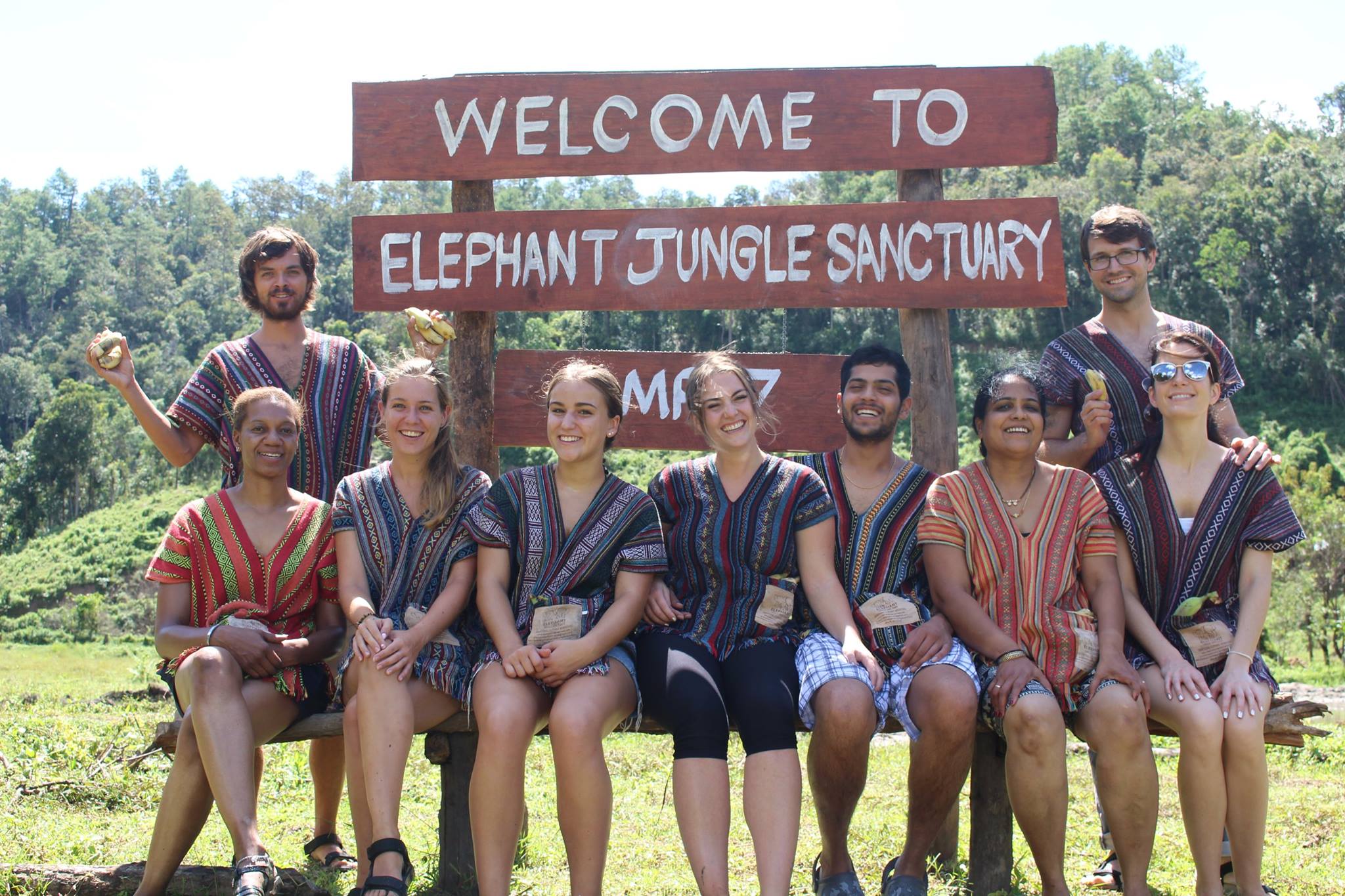 Feeding time was soon upon us. We were told we would be feeding them bananas, so the Mahouts filled our pockets with bananas [I got extras on top of extras, one of them seemed to like me – Josh] and told us that we needed to peel any bananas that we gave to either of the baby elephants. Feeding the elephants was intimidating at first, they obviously had learnt that people meant food and came rushing over to us. I was trying to peel a banana for the baby when a large elephant just put his trunk round and stole it clean out of my hand! Cheeky bugger. We were then given sugar cane for the elephants as their next treat (it was peeled for the babies). The feeding experience was extremely special and something I will always remember, just being able to watch an elephant without a fence in between was incredible. 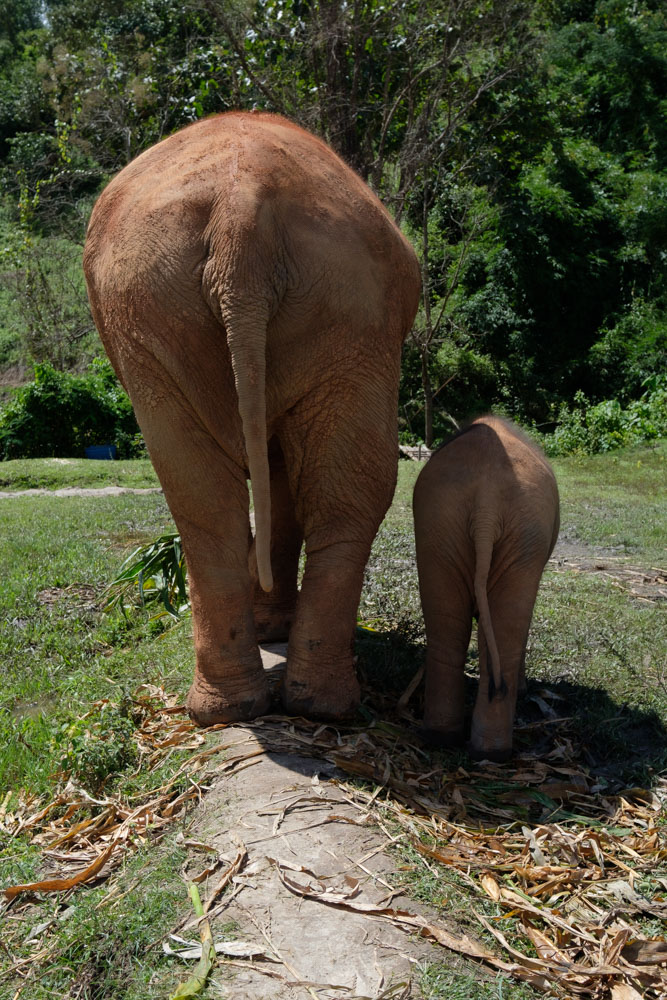 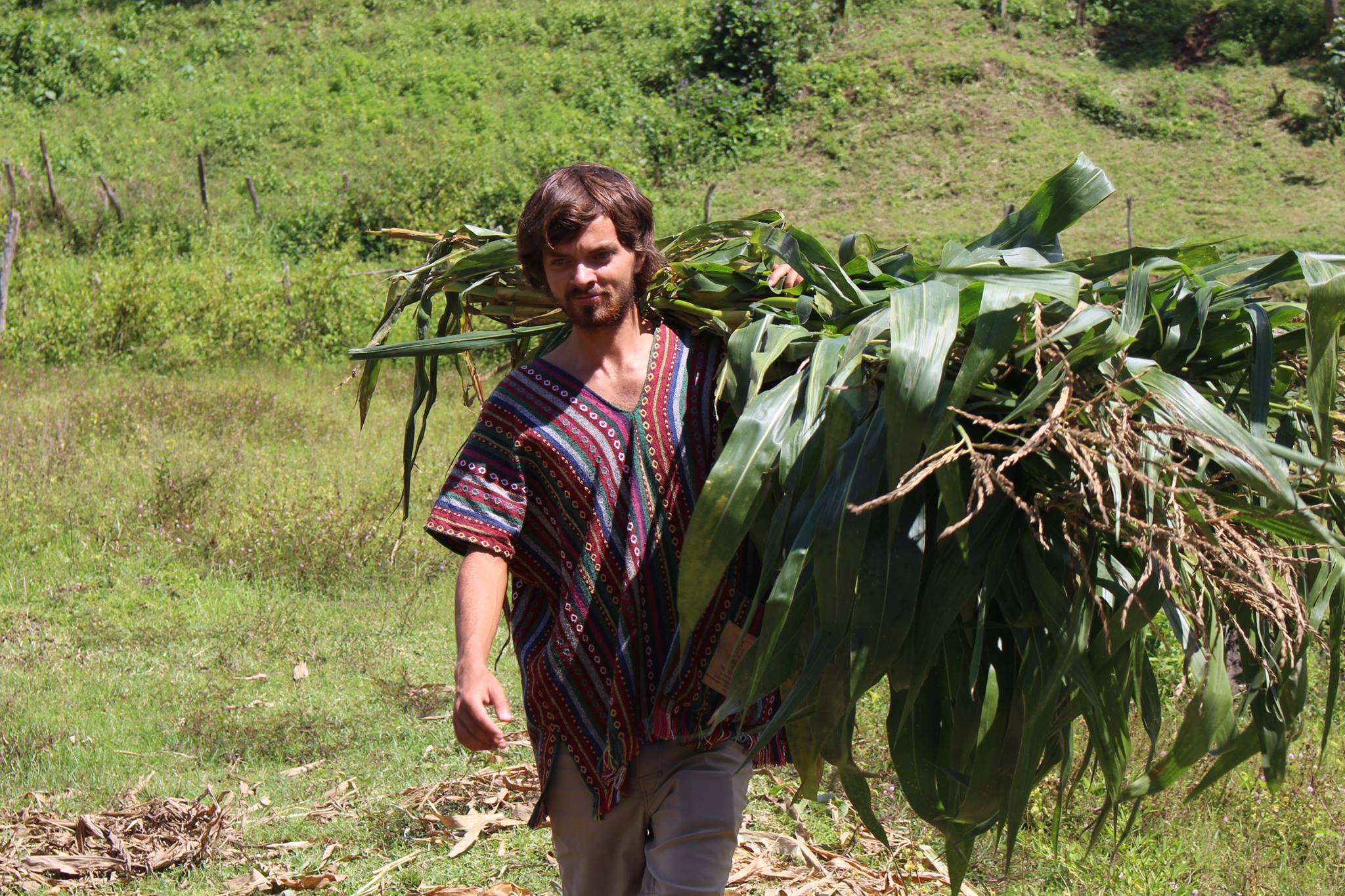 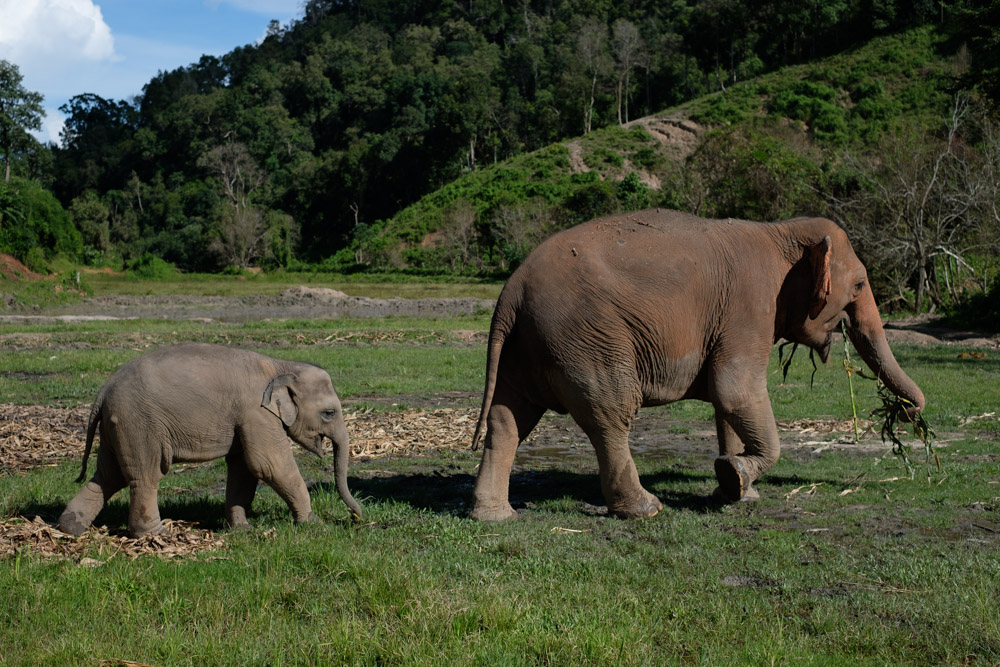 People then started posing for photos with the elephants, I had no problems with people standing near the elephants for photos and even crouched in front of them myself whilst they were feeding for a once in a lifetime photo. However, when the Mahouts said that one of the elephants could give kisses and cuddles at certain command words I felt uncomfortable. I don't know why or how that elephant could do those tricks, so I firmly declined when the Mahouts asked if I wanted one of those photos. 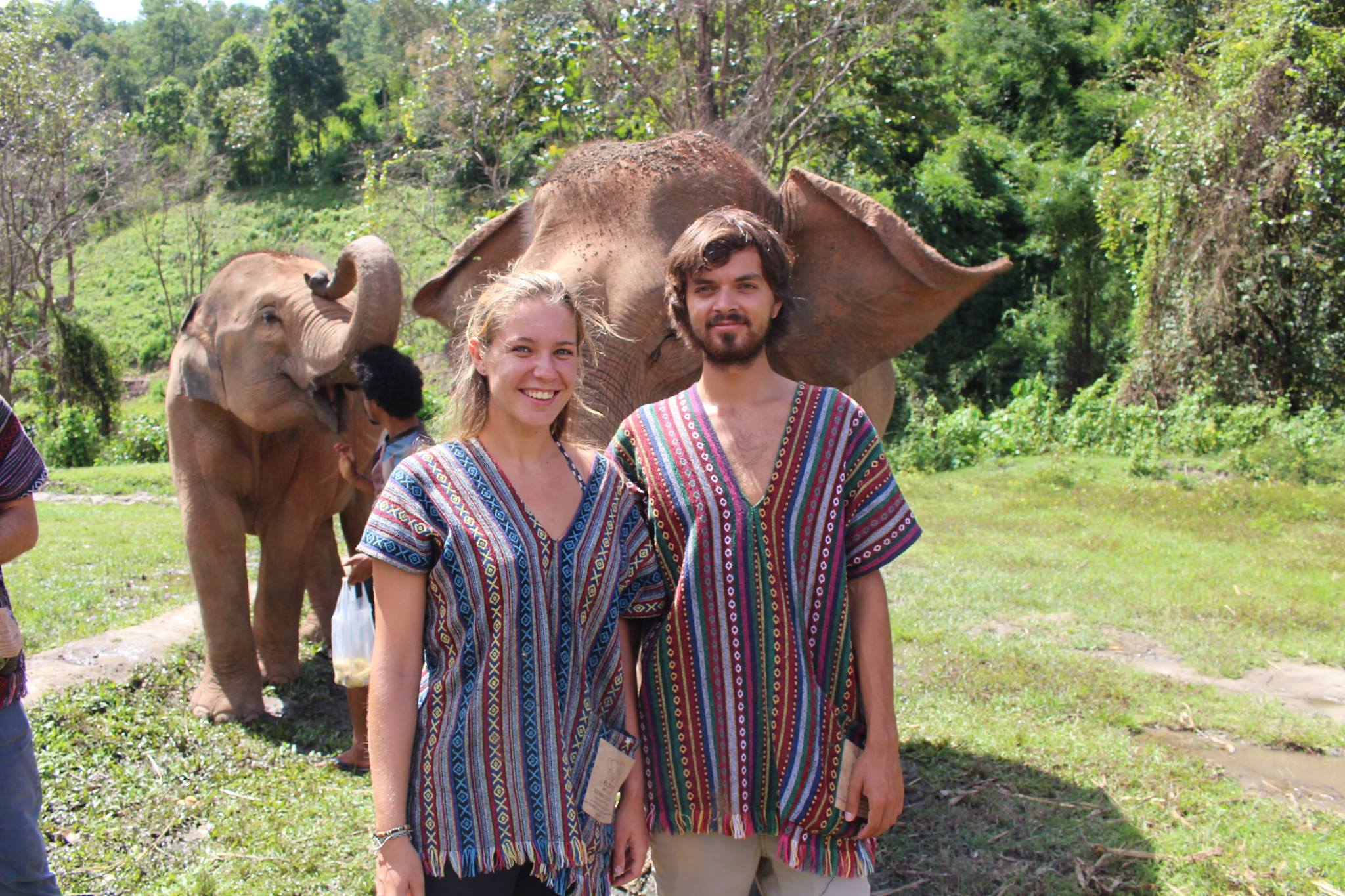 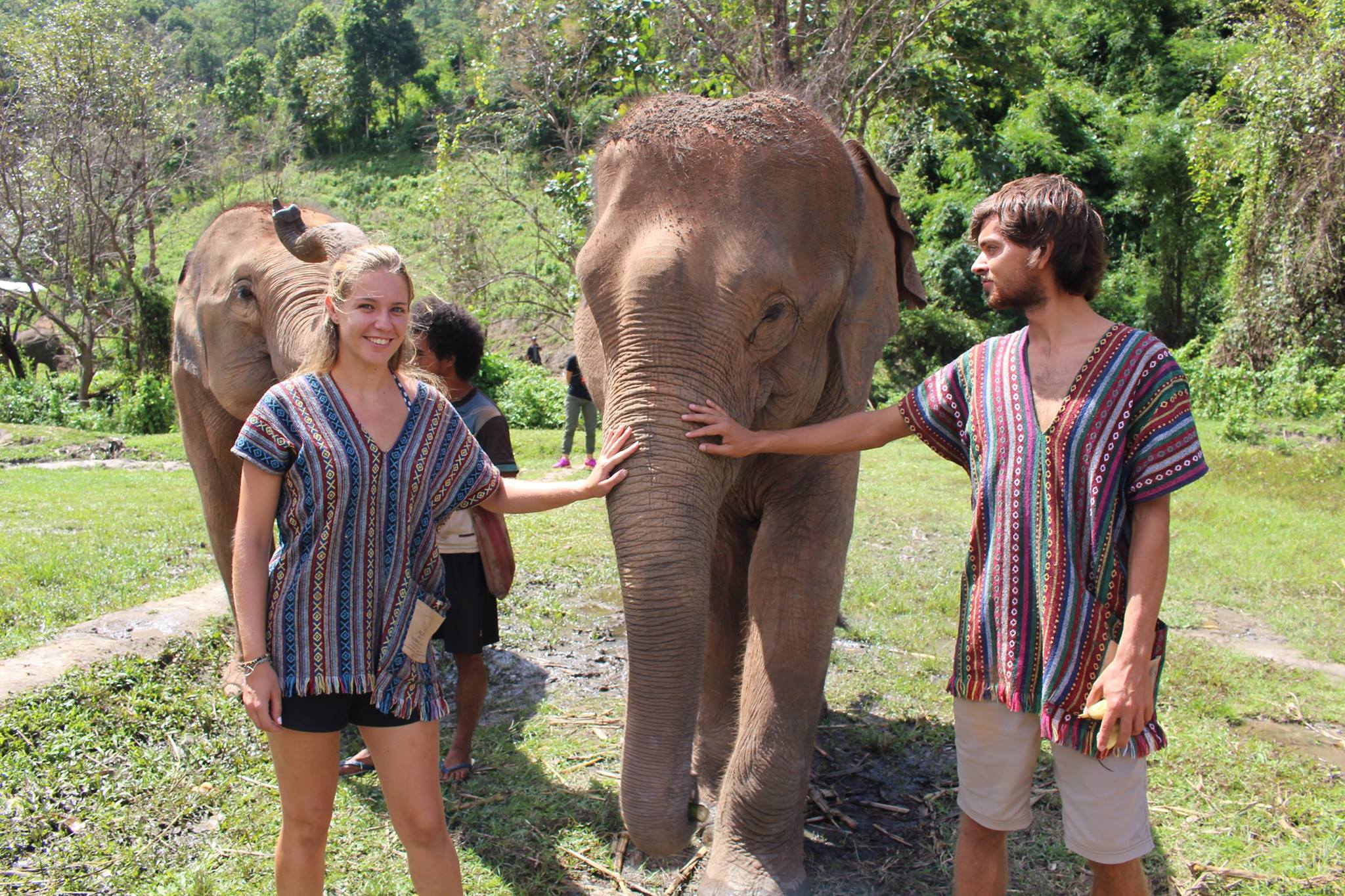 As a group we were then taken to see another group of elephants elsewhere in the jungle sanctuary. The walk was a lot bumpier and longer than I'd expected, but this was a fact that made me happy as it was a sign that the natural environment had been maintained as much as possible. However, after we'd been walking for ten minutes I turned around to see no sign of Josh – I was only slightly worried. Josh likes to take his time and appreciate things a lot more than other people [I went back to swap lenses and saw they the group had walked off, whoops – Josh]. The elephants that we saw in this part of the sanctuary were a lot older than the other elephants and that's why they were not part of the main activities – they didn't want to tire them with excitement or people to keep touching them.

We watched the elephants here for a while before we walked back to have lunch (a blooming sizeable portion of vegetable fried rice – yum!), after observing even more elephants in another part of the sanctuary. During our lunch break Josh watched a guy take photos of elephants [I couldn't work out if he was a super eager tourist or a pro. He had at least two cameras with him, one of which was in a waterproof housing worth over a thousand pounds! – Josh] and talked to one of the guys in our group about cameras – he just can't get enough of photography! After lunch we were told we would be making medicine balls for the elephants. They turned out to be natural diet supplements of raw rice (lots of fibre), white rice, lime (vitamin C) and banana all mushed together in a pestle and mortar then shaped into balls the size of our palms. 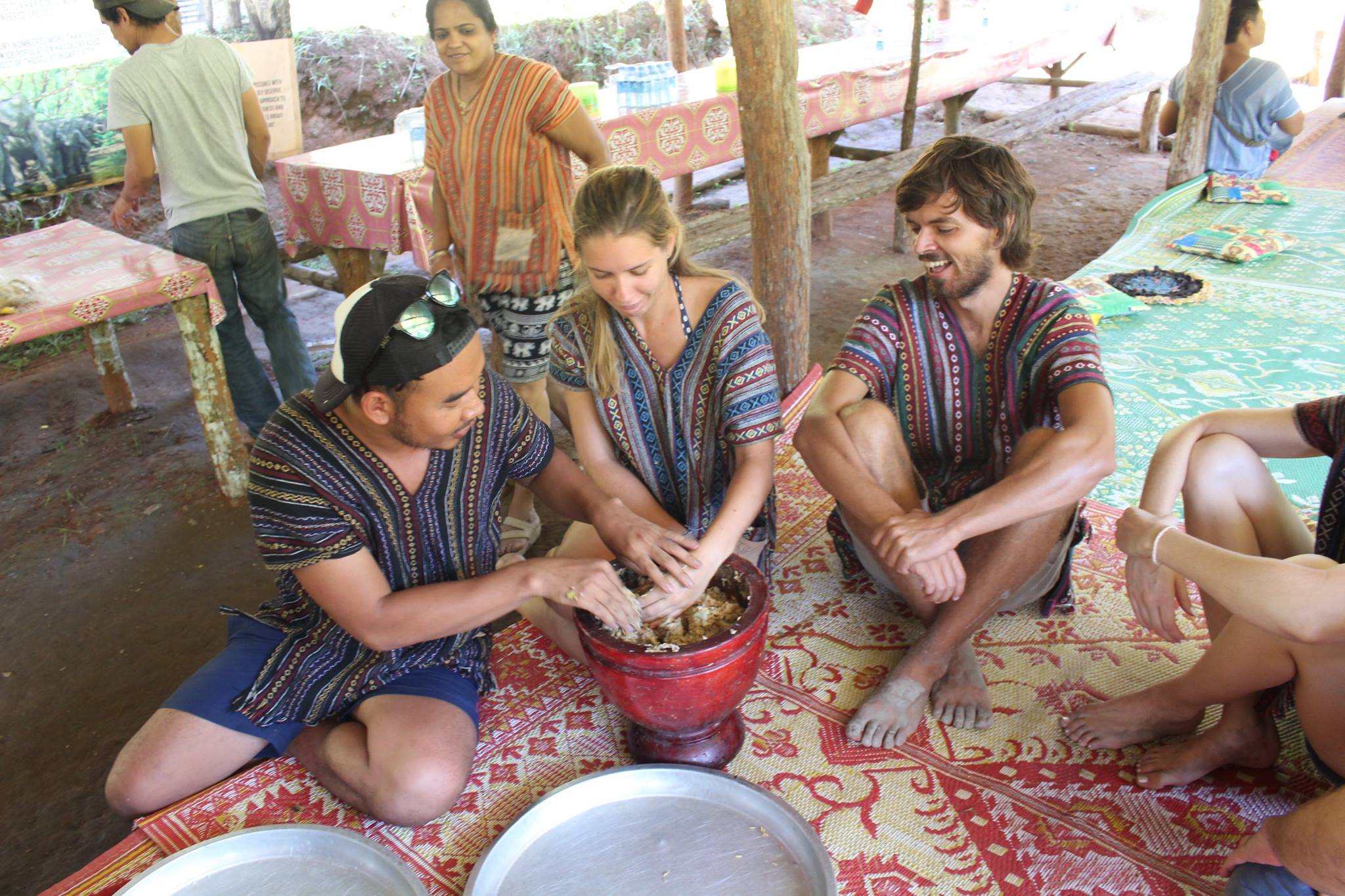 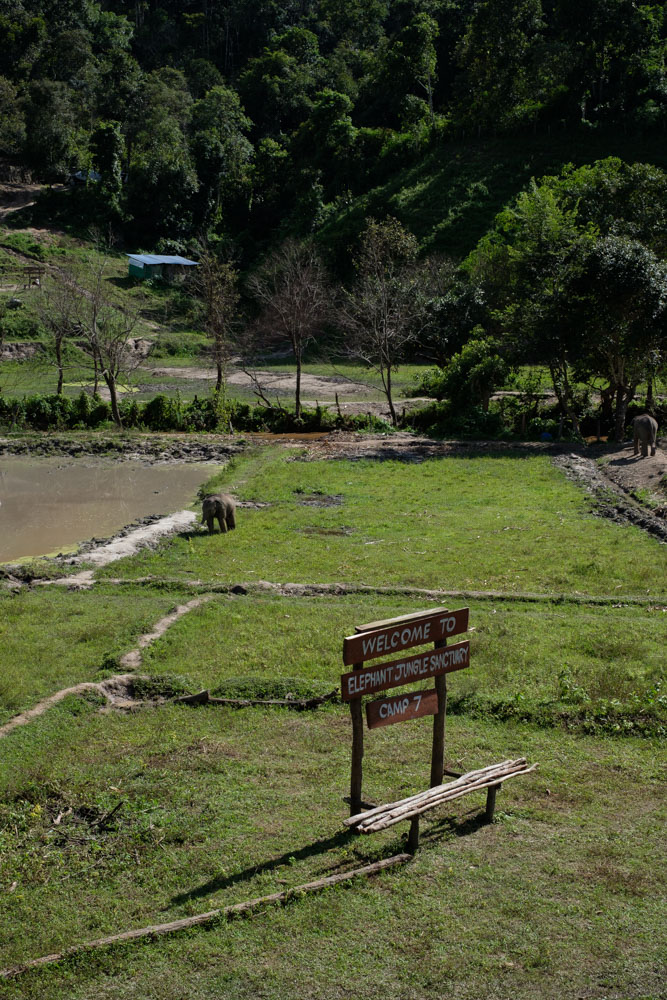 After the medicine balls were made we changed into our swimming costumes and fed the medicine balls to the elephants. Once they had been consumed we then went into the mud pit. The elephants followed and we were invited to rub mud onto the elephants as elephants like to cool themselves down with a mud bath. Josh and I partook for a little while and then sat on the side to observe the baby elephants rolling around in the mud and playing – they seemed to be having a brilliant time!

Once the elephants were sufficiently covered in mud the Mahouts walked the elephants to the river where they were to be bathed. It seemed a bit weird that we were washing the cooling mud off of the elephants! Again, Josh and I partook for a short while but then wanted to just observe the elephants playing in the water themselves. 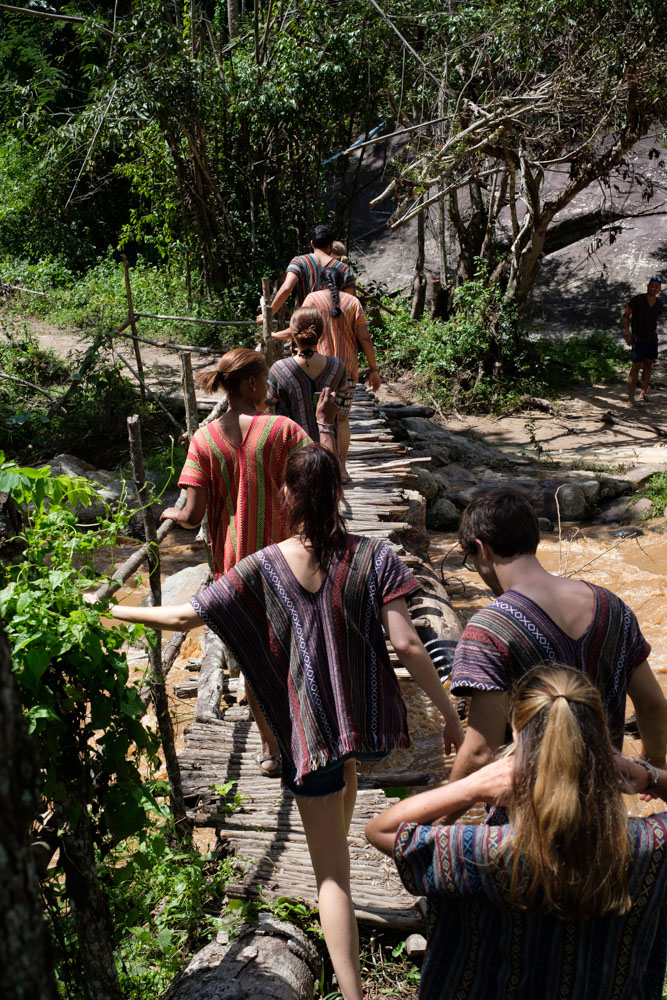 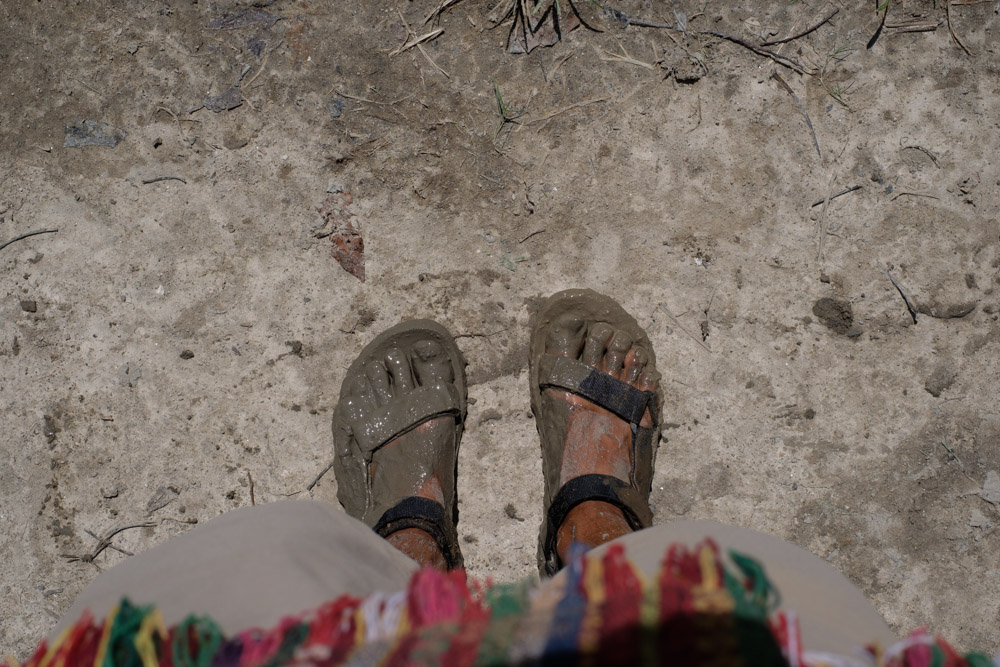 On our walk back to camp Josh struck up a conversation with the guy he had watched taking photos during our lunch break – he turned out to be a professional photographer working on a project for National Geographic. Pretty damn cool. Whilst Josh was in full conversation [He was really nice and we chatted for quite some time, annoyingly I can't remember his name – Josh] I helped feed the elephants for one last time. Whilst feeding an adult elephant, I felt something push into my leg with force. The next thing I knew I was on the floor after having been knocked over by a baby elephant who had got really excited by a peeled banana! I looked around to see the Mahouts all laughing and was glad to see that the baby elephant was not punished in any way.

![The baby elephants move surprisingly fast, I had to dodge this one just after I took this shot – Josh](/content/images/2017/10/DSCF2967.jpg)

After feeding the elephants we were shown to the shower block so that we could clean ourselves of the mud and river water [The irony being that the water coming out the shower was likely coming from the river anyway – Josh], ready for our pick up truck ride home. 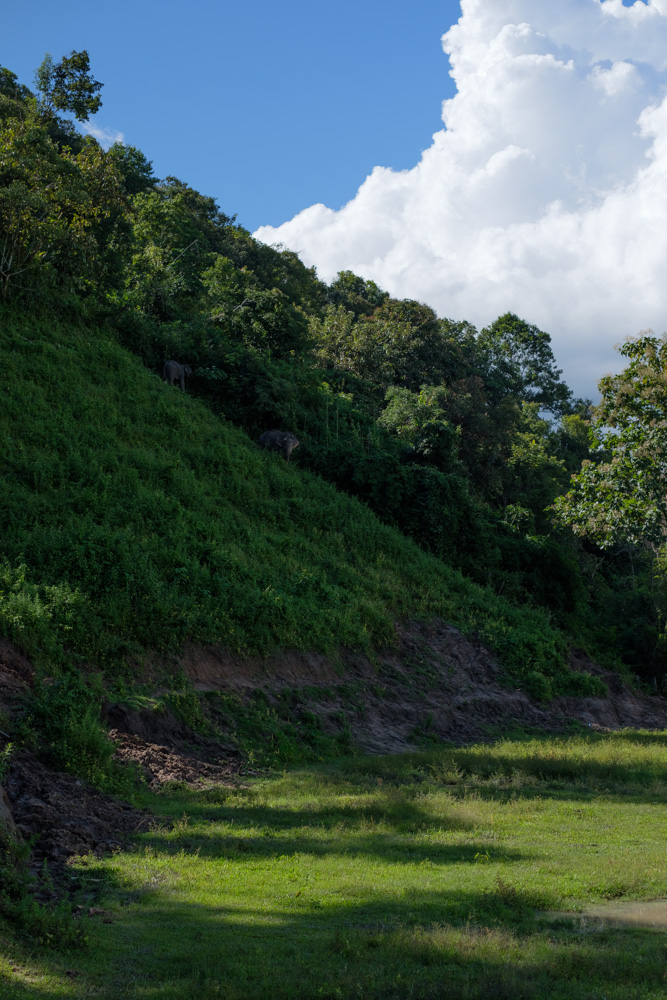 The day was an incredible experience, seeing these majestic animals up close and personal whilst being able to feed them and see how their skin felt. I do believe we did it in the most humane way possible, but I wouldn't do it again. The elephants were obviously cared for by their Mahouts of the Karen tribe and had a lot of natural space to roam around but they were still loosely kept in captivity. Elephants have had a pretty rough history in Thailand and I hope that their future is better for them – that sanctuaries are set up rather than elephant trek places, but more importantly I hope that one day there are no need for sanctuaries and that the elephants can live naturally without fear of being harmed by humans. If you go to visit elephants one day, then please do your research. None of these places will be perfect but there are some which take a lot better care of their elephants than others! 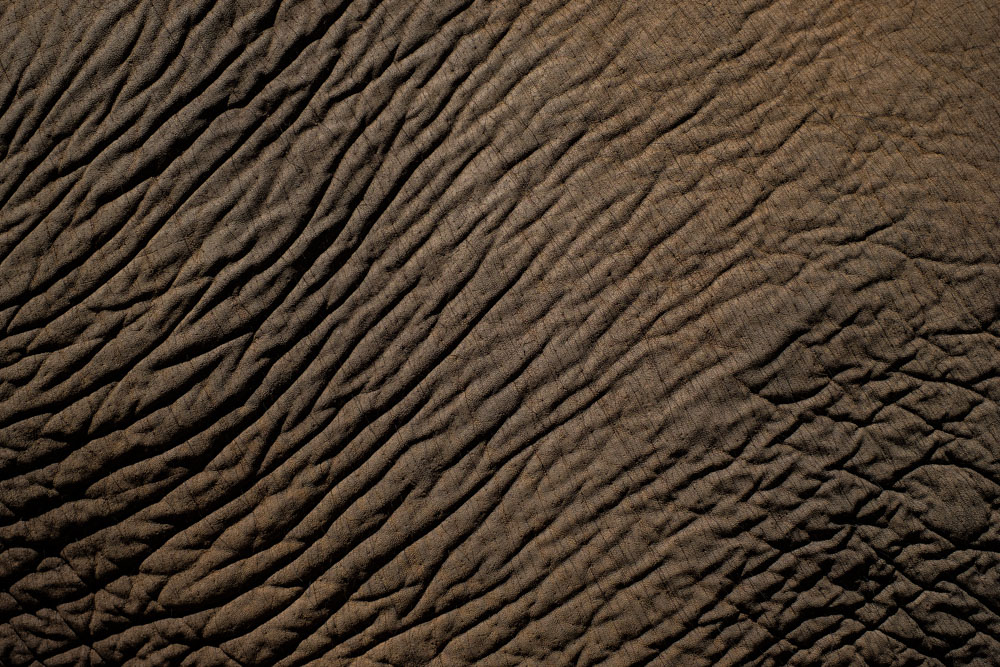 How can food this cheap be this good

We left Bangkok hoping for something a little smaller and as nice as Bangkok was, a little more chilled.…