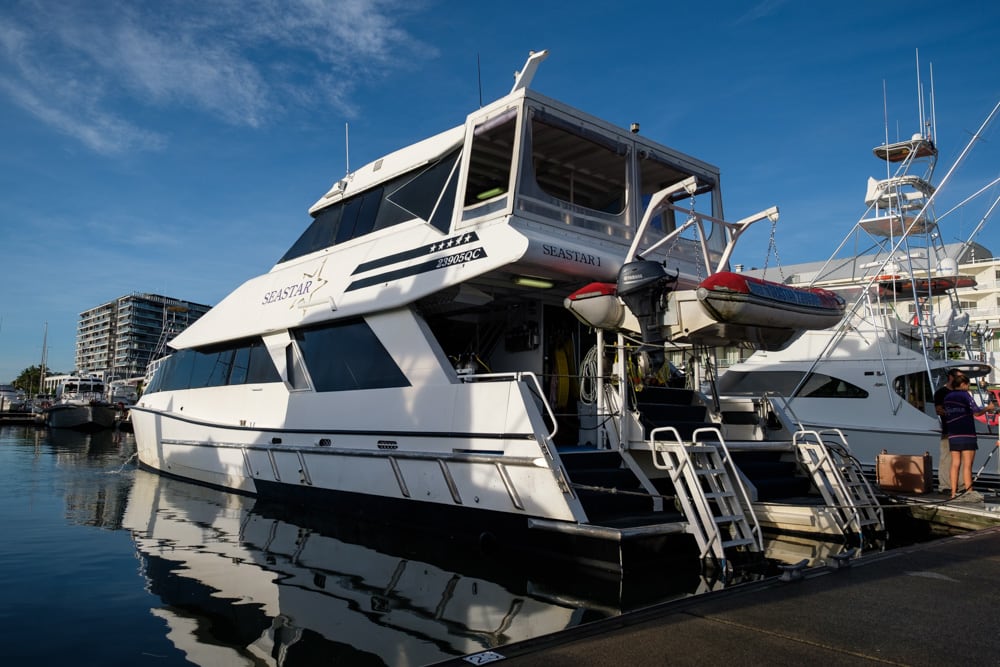 The Great Barrier Reef was the only place in Australia that we actually knew a little something about, but even then we didn't know too much apart from that it was meant to be spectacular to view and could be seen from space.

Prior to the trip I did some research on TripAdvisor to find a company that rated highly in customer satisfaction and also held eco status so that we knew our visit would minimise its impact on the reef itself. The research came out with a small locally owned company called Seastar Cruises coming out on top, so I booked the trip nearly a month in advance to make sure we could get the date that we wanted.

The night before our trip I just couldn't sleep, I was so excited for the trip and wondered how it would compare to the snorkelling that we did on Gili Air. Despite the lack of sleep, we got up at 6am to be at the pier for boarding at 7.30. The boarding process was super slick, each member of staff had a role to complete and they did it really well (all with a smile on their face).

Gary the skipper welcomed us on board the catamaran, we then read through safety notes and effectively signed our lives away with another member of staff. We then walked through where another member of staff looked us up and down to size us for a stinger suit which would be assigned to us for the day. After all of that we paid our marina fees to then be treated with a hot drink and a muffin – yum.

With muffins in hand we found seats on the top level of the boat and settled our bags under our chairs. Once we were comfortably sat down another member of staff came along to size us for the fins that would be assigned to us. As soon as we'd finished our muffins we were called to the front of the boat along with everyone else, this was where we were given an introduction to all of the crew members whilst the boat left the marina.

We were then given the first of many safety talks, that's one of many things that Seastar Cruises were great at – safety. In the equipment demonstration Big Chris made it clear that they would just prefer the majority of people to wear buoyancy aids, they also had pool noodles for the nervous swimmers and floating rings to pull people around on for those that couldn't swim at all. Thankfully Josh and I were just in the buoyancy aid crew [Most people don't need a bouyancy aid, but it means you can be lazy and just float, so I recommend taking one – Josh]. 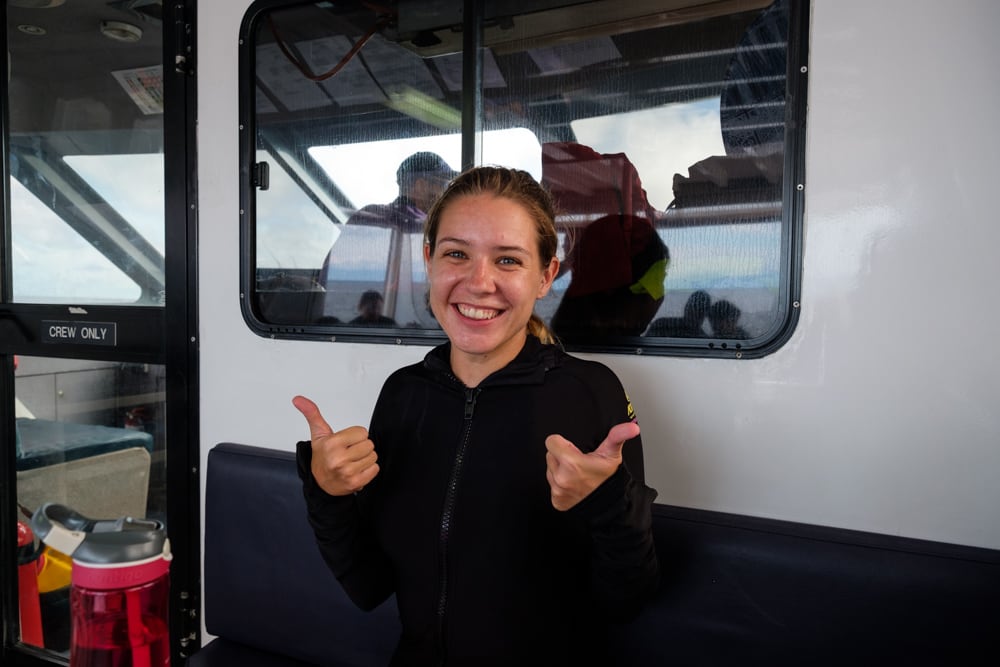 Once all of our general safety briefings were over we sat on the deck of the boat sunbathing until we got to our first snorkelling site of Michaelmas Cay. 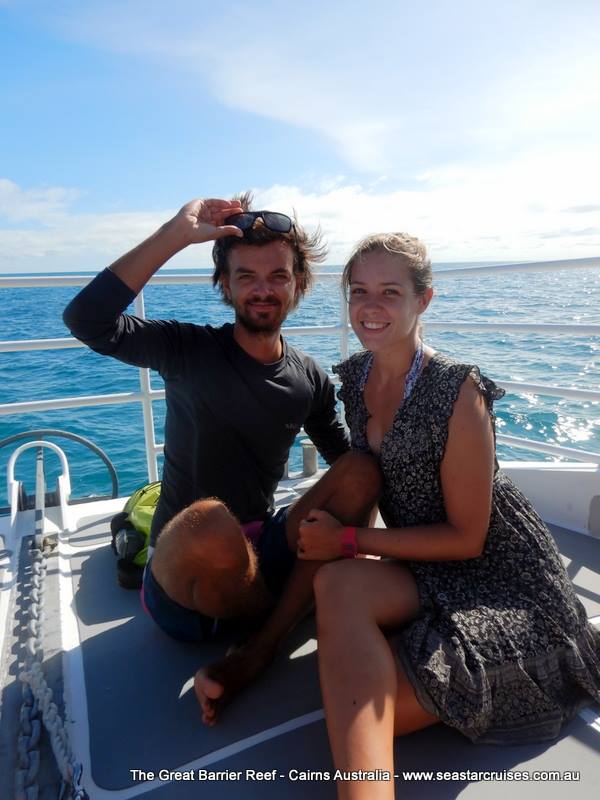 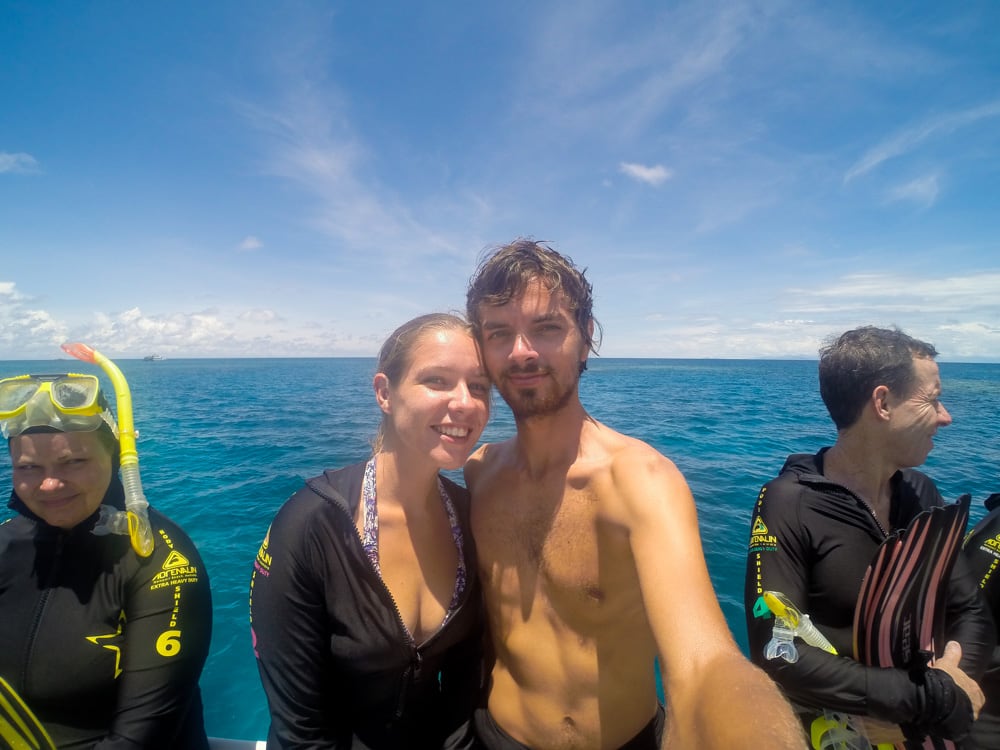 It was explained during our Michaelmas Cay briefing that the Cay was a small island that had a bird sanctuary on it, there was a small fenced off area where people were allowed to stand and if they went outside of it they would be heavily fined [Which we were happy to hear. The restriction was evidently working, as the small island was covered in birds! – Josh]. 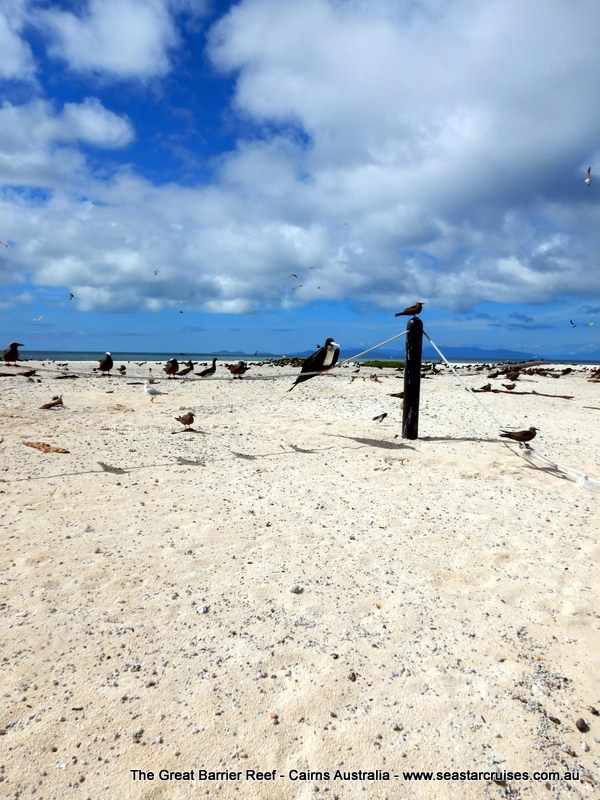 When the boat came to a stop everyone put on their stinger suits and buoyancy aids. The people on the boat were split into two groups to ensure that there were fewer people in each snorkel tour. Josh and I were put into the first group so we took our snorkel and fins and got on to the glass bottom boat. Once on the glass bottom boat we saw SO many large fish – much bigger than the ones we'd seen snorkelling in Gili Air! The guy also told us about the birds on the island, showing us the red footed boobies (HA) and a more rarely spotted frigatebird. 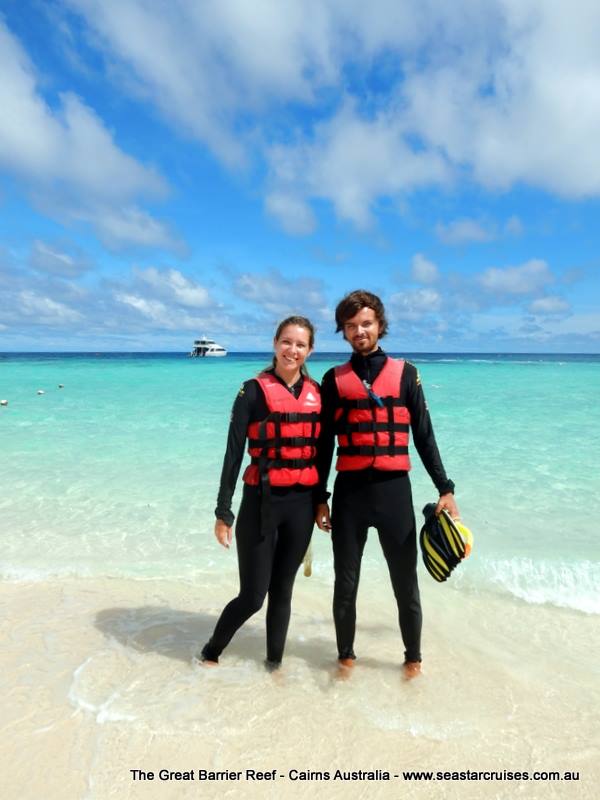 The glass bottom boat drove us the small distance to Michaelmas Cay where it dropped us off and then returned to the catamaran for the second group. As we were standing in the fenced off part of the Cay we had defog sprayed into our masks and were then told to put on our fins and get into the water to follow Melinda for a snorkel tour. In the water I found it hard to follow and hear Melinda at first, but when I got used to it I found it super cool. She showed us parrot fish, boulder coral, stag horn coral, sting rays and squid, all whilst explaining a little about them. It was fascinating. During the snorkel tour Josh was having trouble with his mask pressing hard on the bridge of his nose so he went and got another mask from the boat at the end of the tour [It's always an issue for me, apparently I'm closely related to the neanderthal. If you're having issues with any of your kit when snorkelling or diving always ask politely if the staff can help – Josh]. 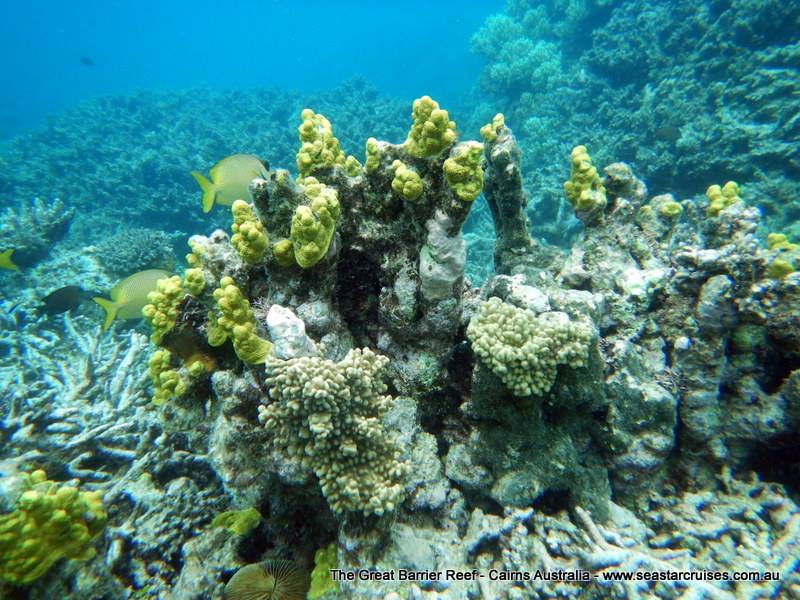 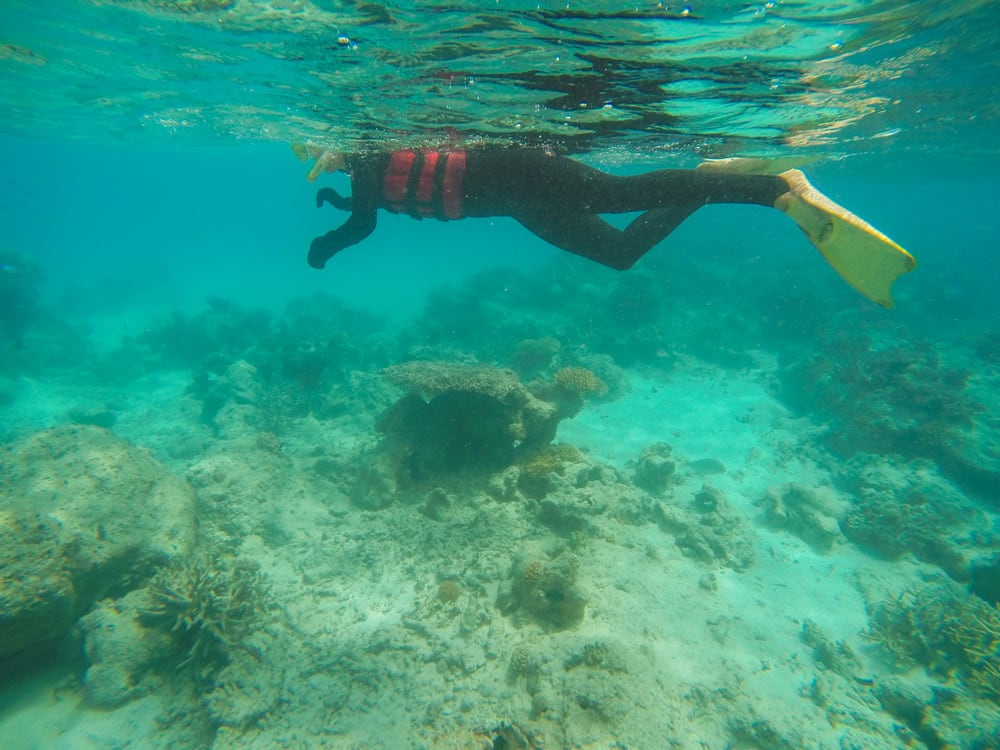 Once Josh had returned into the water we were given time to snorkel by ourselves, I can't even begin to describe the colours and sights which we saw. It was incredible to just float above the underwater world and watch it go by as if you aren't even there. It was just like watching Blue Planet with 3D turned on [I loved popping above the surface and ducking back under, marvelling at the usually hidden world below the water's surface – Josh]. It was also very surreal seeing jellyfish floating around us and having complete faith in the stinger suit to keep you from being stung. 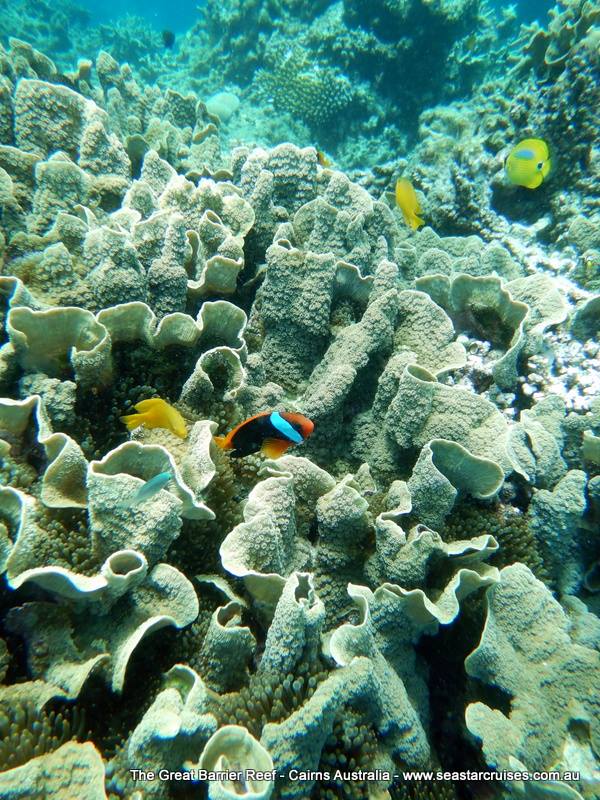 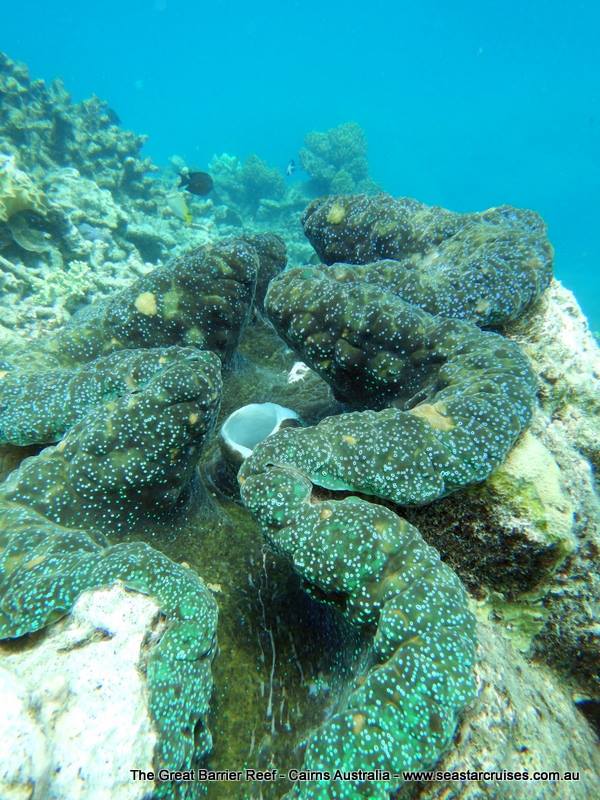 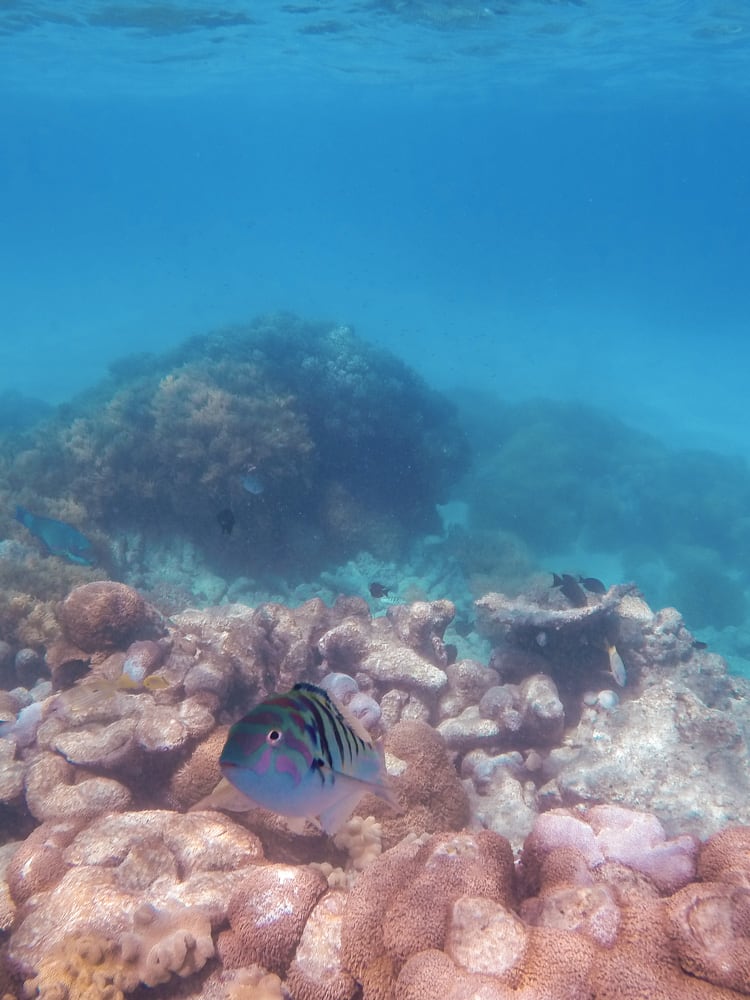 As we were just starting to get tired we swam back to the catamaran where we were greeted with a buffet lunch. As we were queuing for the buffet lunch we were told by the skipper not to panic if we heard 'UNCONSCIOUS SNORKELLER' being shouted out, as he was going to throw himself off the boat as an emergency response drill for his team. We watched on with hilarity as the crew all seemingly rushed into action, dragging this poor guy out of the water and onto the boat. Some of the other guests hadn't heard the message so their faces were a picture, until those of us who knew what was happening informed them and then they started laughing too.

Back to the main thing – the buffet. The buffet was beyond all my expectations (as someone who loves food this was a major bonus for me), there was so much food and the vegetarian options were plentiful. Once everyone had finished their lunch we were offered to attend a reef information session, we decided to go for it and learnt some more about the organisms that we had seen at Michaelmas Cay and were going to see at our next stop of Hastings Reef. It was during this talk that Josh and I first started falling in love with the parrot fish!

As the catamaran pulled up at Hastings Reef we put our stinger suits back on and got in a snorkelling tour with Big Chris. The water at Hastings Reef was MUCH deeper than at Michaelmas Cay which I at first found very intimidating but soon got used to. The waves were also bigger, which meant that the buoyancy aid didn't feel as effective and for the first time ever I felt that I had to tread water (turns out I did learn a few tricks in last year's swimming lessons!). Despite the depth of the water there was still super visibility. Our highlight of the second snorkelling tour was seeing an adult green turtle, the group were told to not swim over the turtle but were allowed to watch her from a distance. Once the snorkel tour was over, Josh and I decided to stay near the turtle and watch her some more. It was the most memorable part of the whole day. 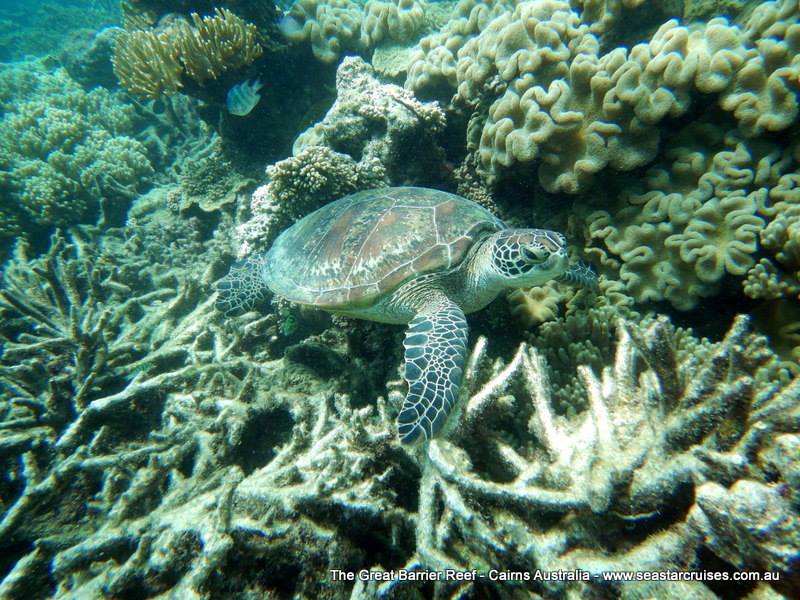 A mixture of the excitement, the stronger waves and the sunshine meant that we soon got tired so we made our way back to the catamaran. Unfortunately when I get tired in the water I start to panic so I started to swim really clumsily and ended up not enjoying those last few minutes trying to get back to the boat at all.

Once we finally flopped onto the boat (there was no gracious climbing up the ladder) we had a quick rest before getting on to another glass bottom boat. This boat journey was a lot longer than the last and had a lot of information about parrot fish and the different types of coral, including cool plate coral which Josh loved [I was too awe-struck to even take a photo, which is rare for me. So you'll just have to trust us, it was truly awesome – Josh].

We then boarded the catamaran for the last time. We were greeted with more drinks, cake and fruit. There was plenty of cake so I ended up going back for seconds and thirds (of course) whilst we ate our cake on the deck [Listen to Heather when she says the chocolate is the best, it is – Josh]. When the boat started to move towards Cairns we were all asked to move inside as there was a storm back near land, we couldn't believe it as we'd had blazing sunshine all day but did as we were asked. When the boat got nearer to Cairns we were shocked to see rain pouring from the sky and water splashing right up and over the front of the boat. 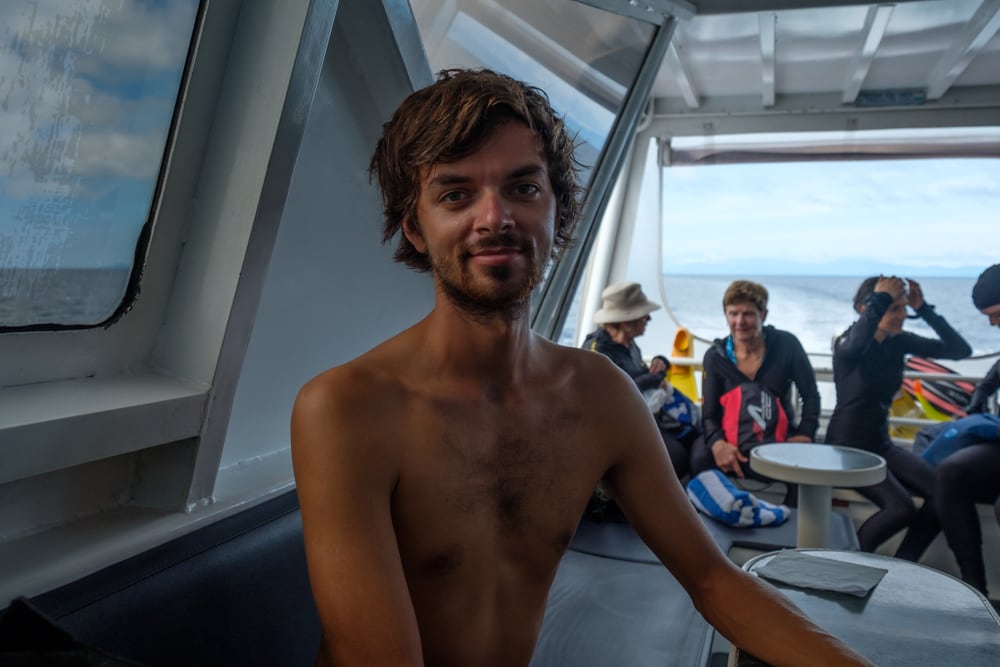 When the boat pulled up in Cairns late afternoon the departure off the boat was relatively quick and sleek with all the crew members wishing us farewell [They all lined up outside, much like the receiving line at a wedding, it was a little weird but nice – Josh]. I was sad to leave the Great Barrier Reef behind but it was an absolutely epic day and I am so grateful for the generosity of our wedding guests which allowed us to go on that trip of a lifetime. We spent the remainder of the evening talking about what we'd seen, looking at the photos Seastar Cruises took and watching the videos that Josh took as well as researching more into the organisms that we'd seen.

If you ever get the opportunity to visit the Great Barrier Reef from Cairns I would highly recommend Seastar Cruises. They did absolutely everything right and went above and beyond to ensure that everyone was comfortable, safe and happy.

Is that art, or rubbish? – Mackay to Cairns & Brisbane

Nikki's last blog saw us staying with Maggs and her dog in Rockhampton halfway up Queensland. We still had…