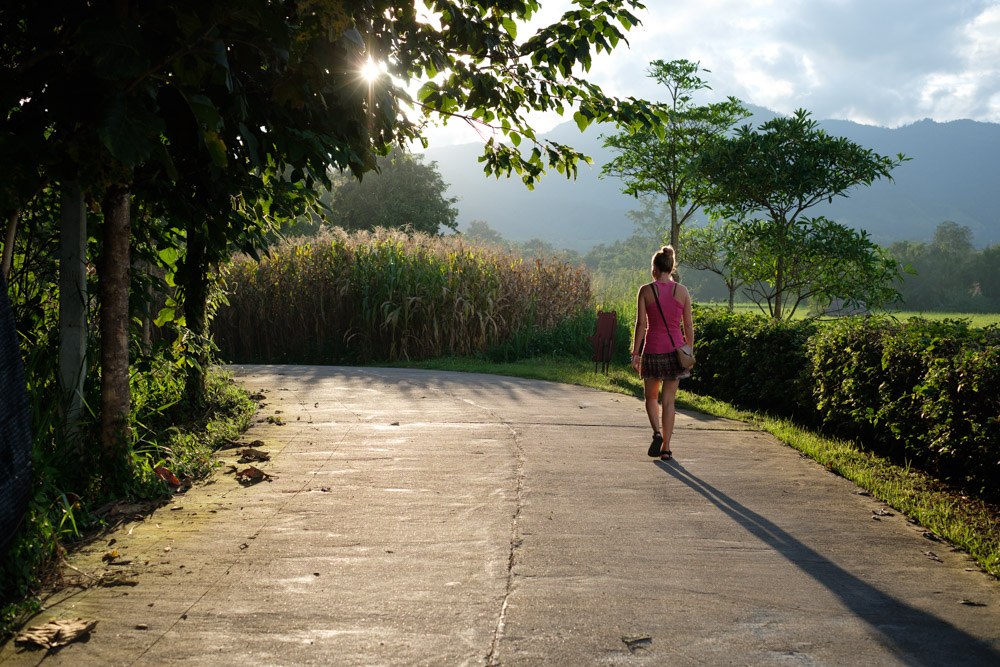 How do you describe Pai to someone that hasn't been there yet? A very green and quiet town in the middle of mountains, filled with hippies and travellers. The only problem is getting there, especially if you've chosen to go by bus. We had previously been warned about the bus trip to Pai with its infamous 762 turns through hills, especially with minibus drivers who think they're really rally drivers and do ridiculous overtaking on blind bends.

After reading plenty of travel blogs we knew we had to get to the bus station to then make our next move, so we did just that. We hailed down a red truck and got our own private red truck to the bus station – but it was more of a mission to find the ticket office than we'd expected! Once at the ticket office we were told that the cheaper bus we were hoping to get no longer ran and we had to get a minibus instead (only about £1 more expensive!). We later did research and found that this is actually the case and we weren't being mugged off.

Once on the minibus we settled in for our travel sickness inducing ride, met a guy called Israel from Israel and kept plying ourselves with the Thai version of Oreos to keep us going. 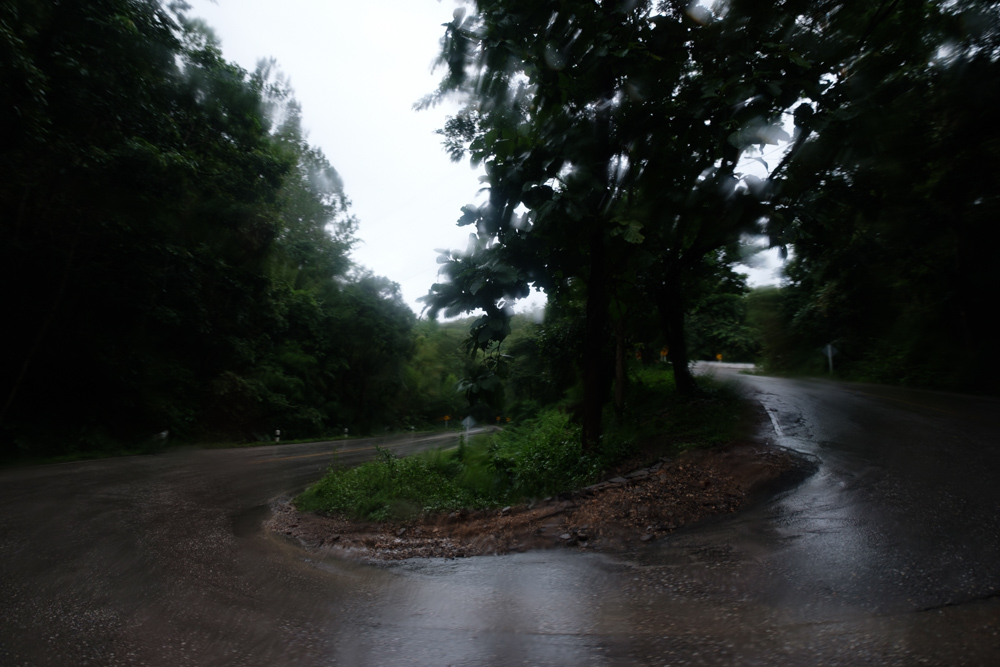 After our minibus ride we walked off in the vague direction of our next accommodation – a rather upmarket bamboo hut (turns out the bamboo was surrounding concrete walls so was very pleasant!). 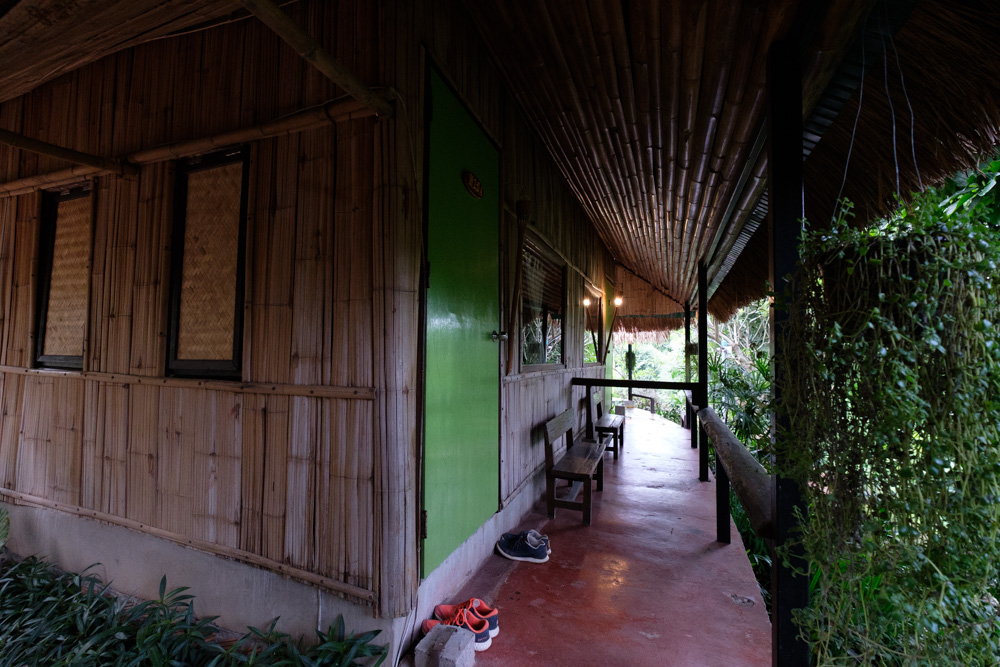 We did what we usually do when we get to a new place – nap! After our nap we walked back into town past beautiful rice fields, huge aquatic snails, dogs that were louder than the ones at Archelon and a funfair to get a Thai dinner from a place which supported deaf families in Thailand. 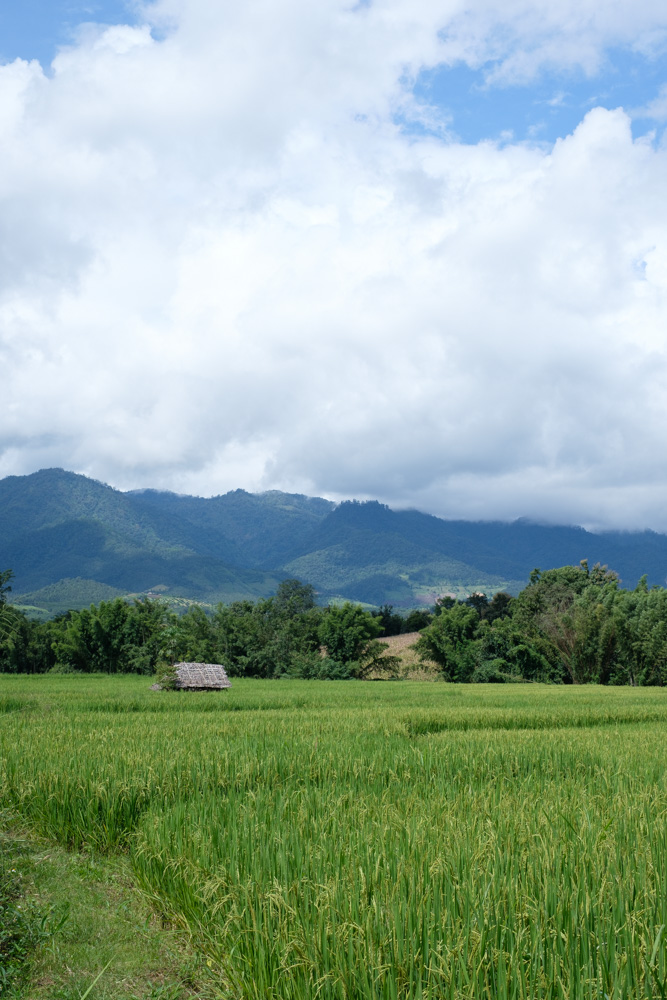 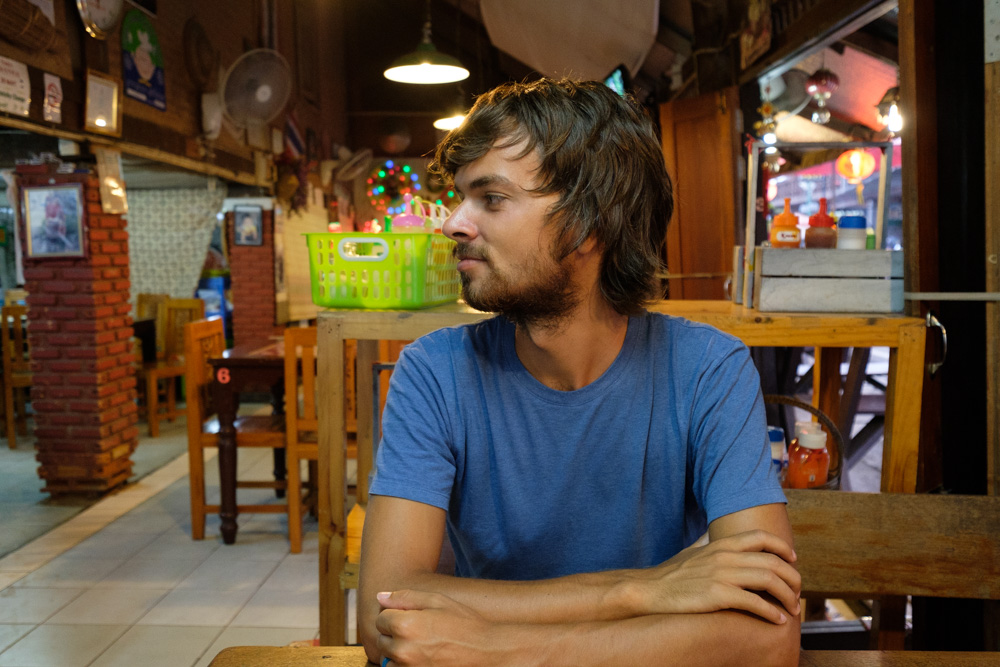 The morning consisted of booking our next stage of our Thai visit before we could thoroughly enjoy Pai. As a teacher and the daughter of a thoroughly organised woman, I'm a stickler for a plan. I really am trying to go with the flow a bit more – I think I'm slowly achieving this but I've still got a way to go.

On our way into town, armed with a bag of laundry (we had no hope of our clothes drying in the humidity of the jungle setting) we were shouted at by a guy offering us a free lift in his motorbike sidecar. Josh and I looked at each other, shrugged and thought 'Hell yeah! Why not?'. A few minutes later we were giving our thanks and waving goodbye to Ahmed. 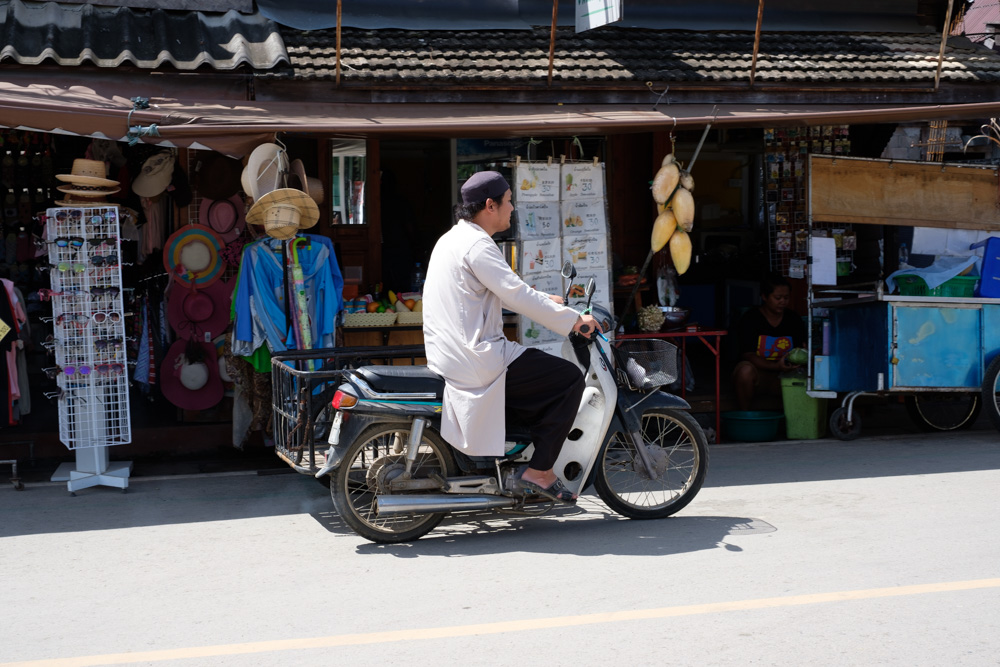 After dropping off our laundry, sipping on fruit juices by a river watching some guys build a bridge and getting lunch we decided that we needed to book a day tour of Pai. 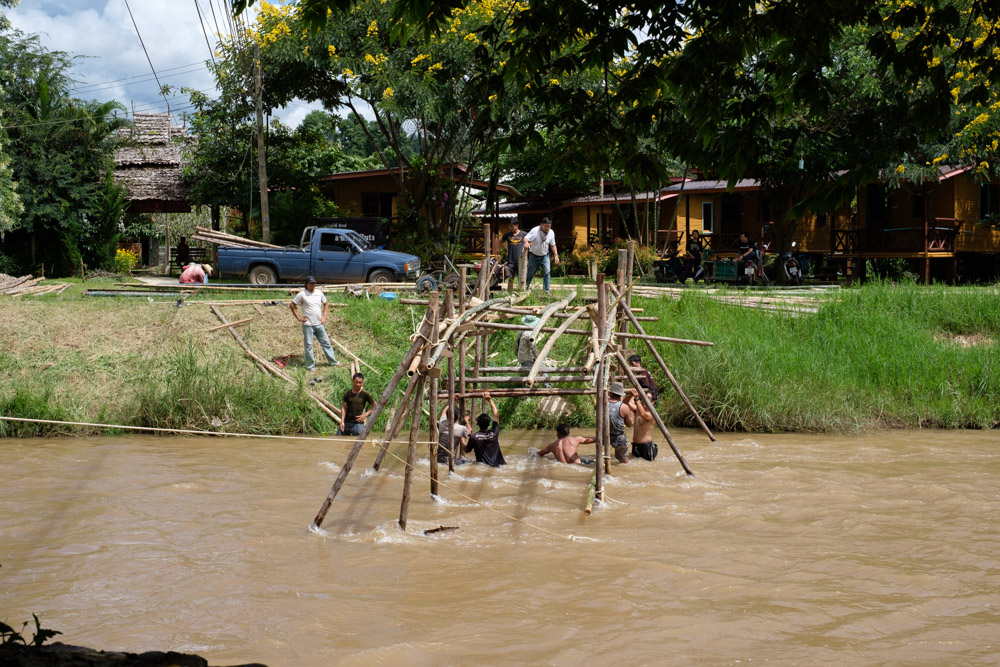 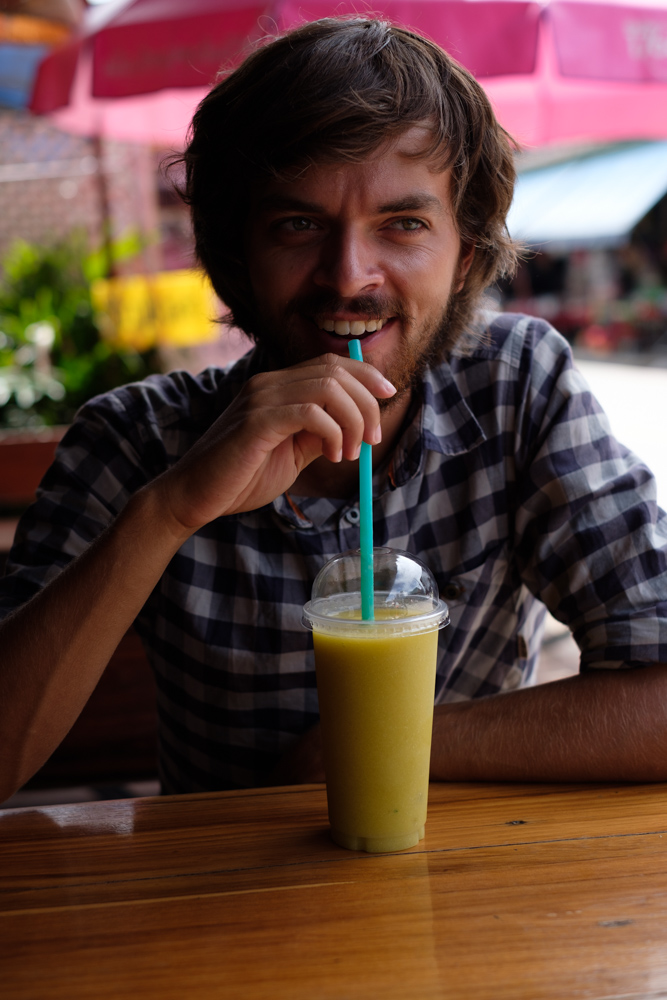 Our lovely friend Emily had strongly advised us to get a scooter license before we left England to ensure we would be covered by insurance if we rode a scooter, but time ran out and we never did (biggest mistake we've made in planning this trip!). Therefore it's quite difficult to get round to many places, so we thought at least a day tour would remove that problem for us. We found a suitable tour and then went for dinner at a burger restaurant. [Seriously, just get a scooter license before you come here, it makes everything easier and means your insurance will still cover you if you do fall off – Josh]

We've tried really hard to only eat Thai food and have really enjoyed every mouthful of it, but we both get a bit tired of curries and noodles every so often. So we went to Maya Burger Queen where I had the most amazing vegetarian burger made from sweet potato, pumpkin and cheese. Josh really enjoyed his beef burger too [It was a real surprise to have such a good burger – Josh]. However, our dessert at a mango restaurant was really disappointing – so disappointing that it's put me off mango sticky rice completely! 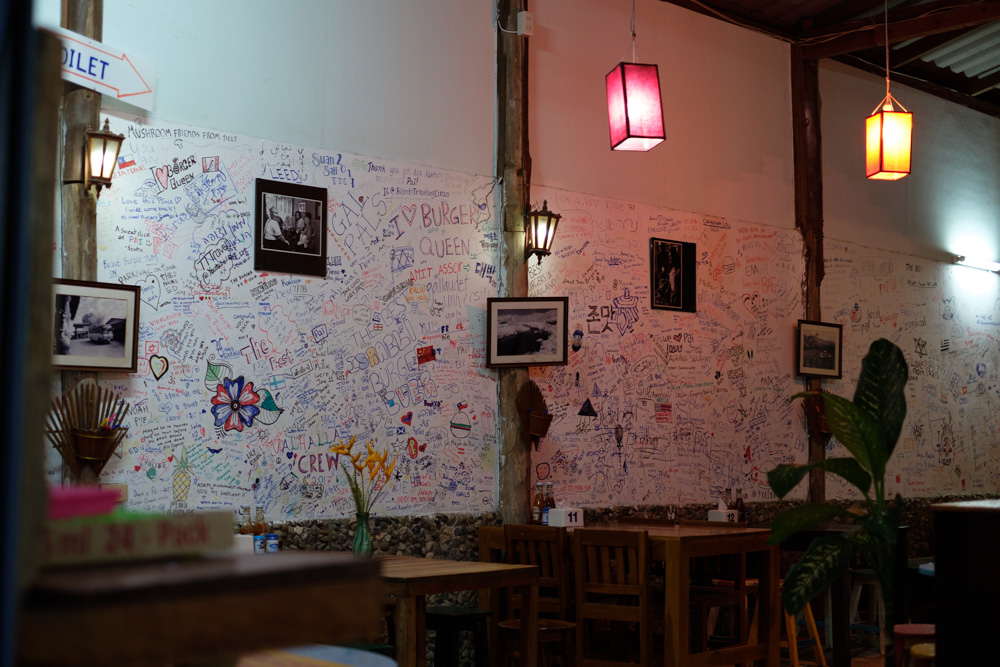 When we got home we were greeted by ants and a gecko in our bathroom – eek! [Geckos are bloody quick – Josh]

Today was the day of our Pai day tour – we got picked up early in the morning by another pick up truck similar to the one that the Elephant Jungle Sanctuary used to pick us up. There were ten of us in total of a variety of ages from all over the world. We spent most of the day in the pick up truck as all the sights were quite far apart from each other, which wasn't too pleasant (particularly with all the bumps and the dodgy overtaking) but it was a necessity. 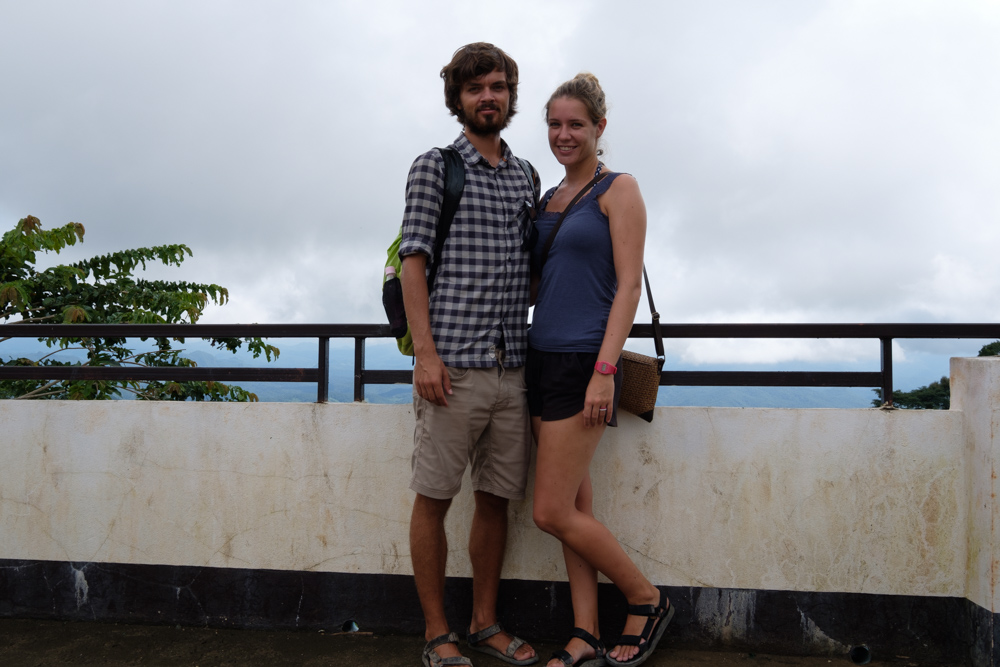 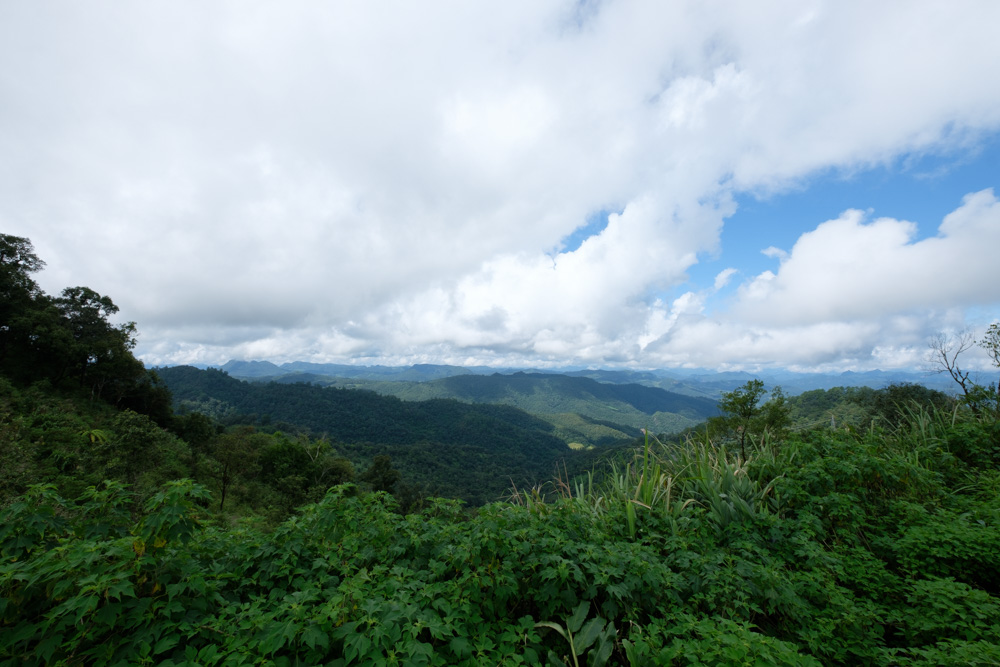 The second stop of the day was Lod Cave where we were quickly passed on to a set of tour guides and expected to follow them – no explanation given! [This was super confusing and happens a lot, just use your common sense – Josh] When we got to the mouth of the cave both of us looked at it in awe – it was an incredible sight and neither of us had been in a full on cave! 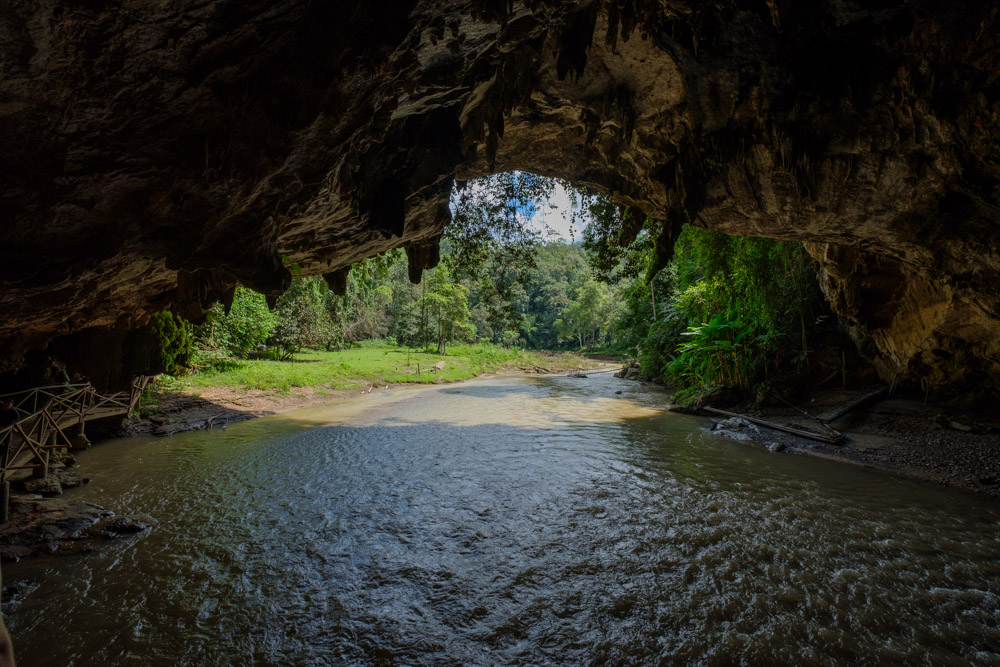 The next thing I realised was that we'd have to enter on a very suspicious looking bamboo raft. Thankfully the water wasn't that deep and the raft didn't move around too much after everyone had boarded. We saw amazing stalagmite and stalactite formations, heard a throng of bats in the cave and stumbled around in the darkness (our guide wasn't so hot with her lamp skills). 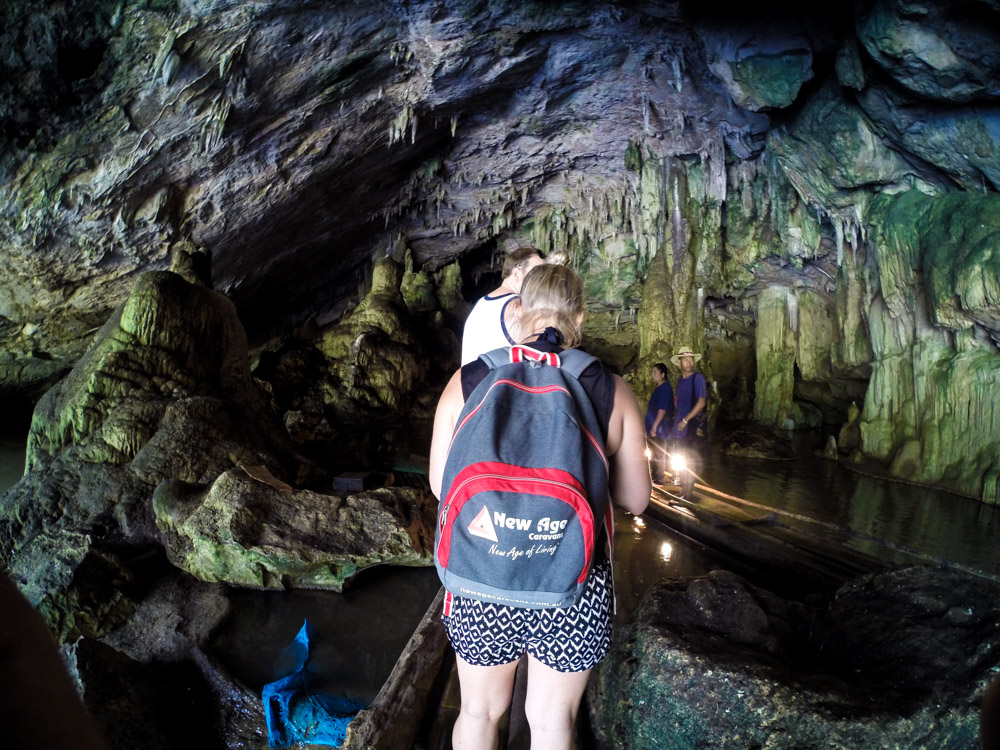 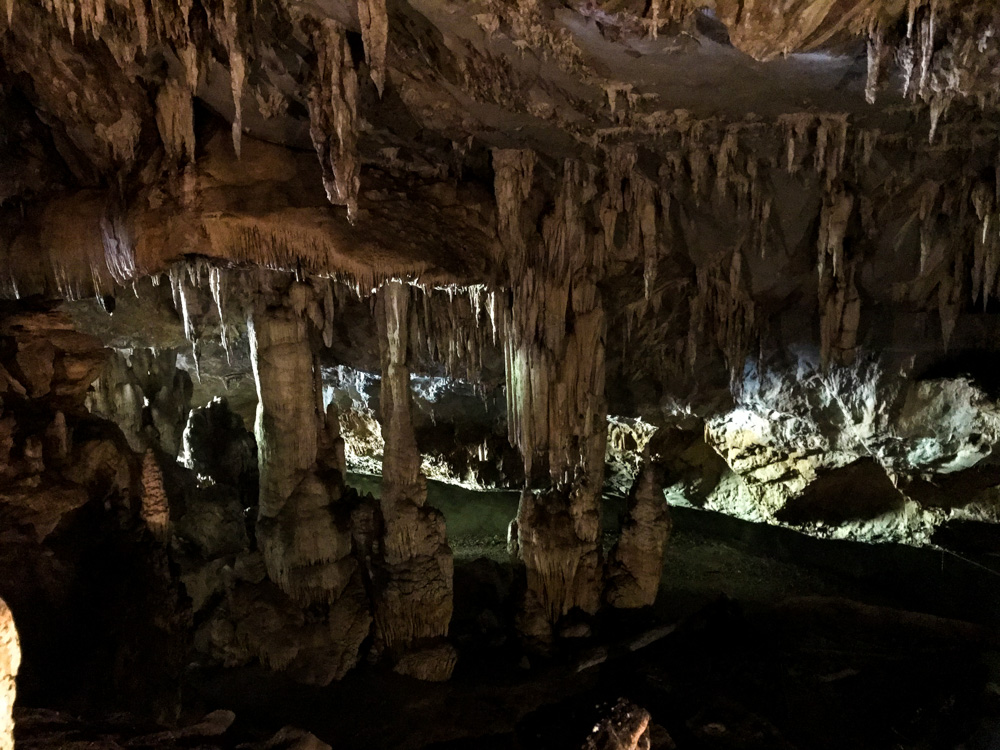 Next on the trip was a stop at hot springs, I was desperate to get in and relax in the warm water whereas Josh had realised his swim shorts were at the launderette and instead took photos. The hot springs were lovely and it gave me a chance to socialise with other women on the trip who gave me tips for planning our journey to the south of Thailand. 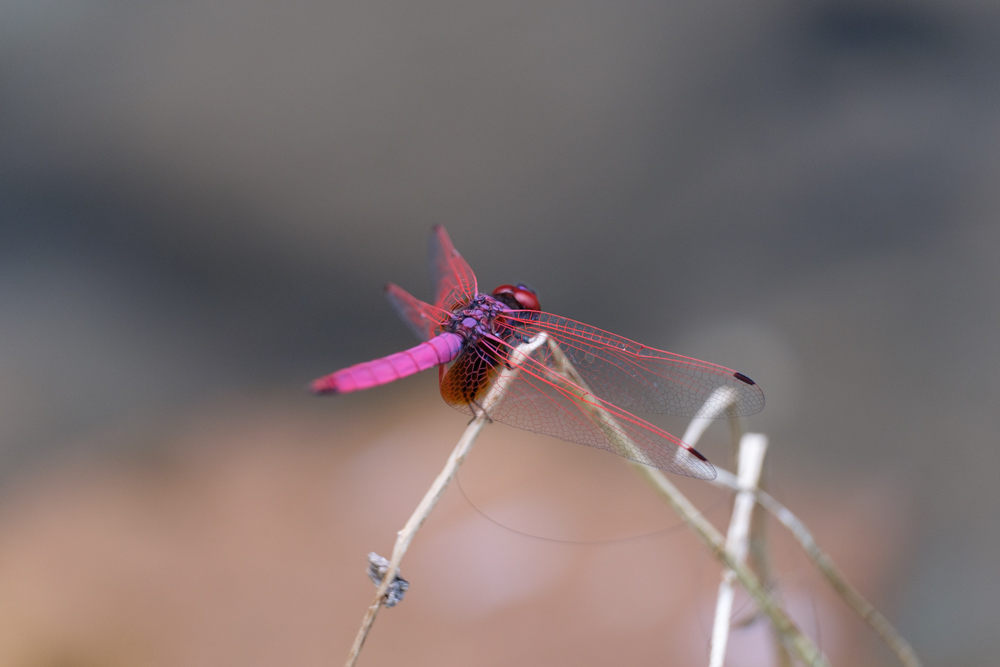 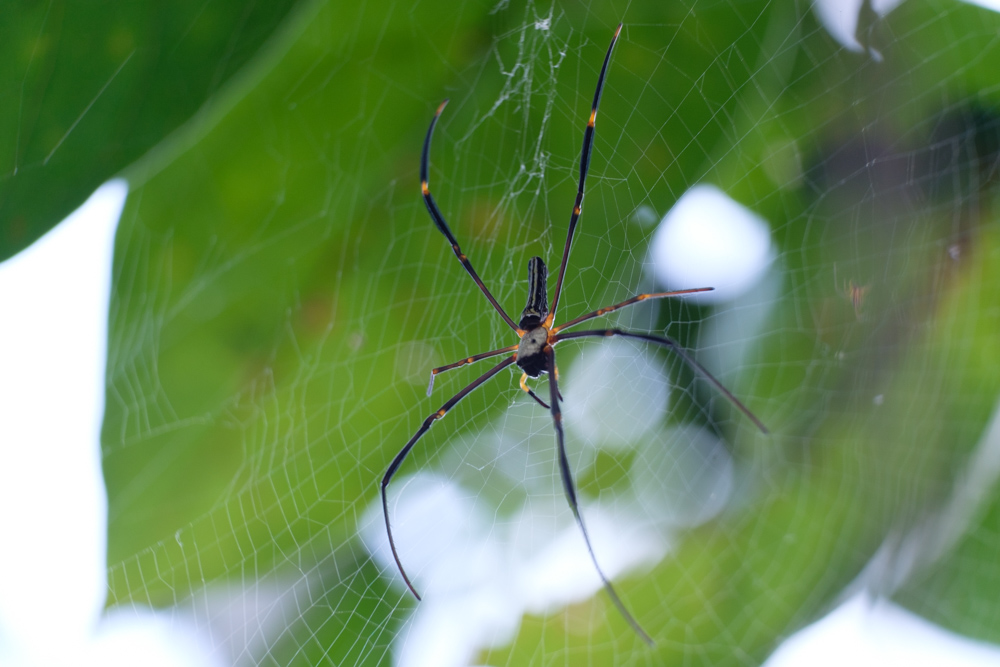 Our next stop was at Mor Paeng waterfall, it was a beautiful surrounding and the sound of the waterfall sounded like something that belonged on a soothing soundtrack. Unfortunately we could see that rain was brewing in the grey clouds above so we didn't climb up the waterfall to the top but instead enjoyed the view of the waterfall itself. 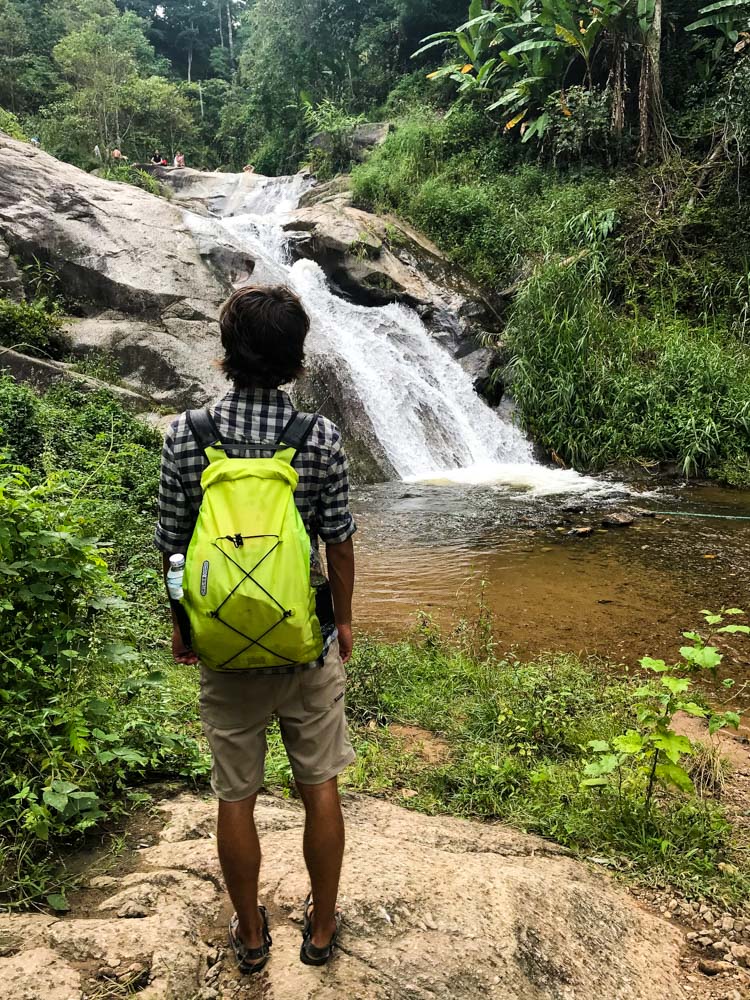 Our journey ended in Pai canyon for sunset. The ridges there were extremely narrow and I could only manage one of them before deciding that was enough! We watched lots of people taking photos on a very suspiciously eroded ledge. When it got to sunset the place became packed with tourists – it was a pretty sight (especially when we saw a Mother of Pearl cloud which was confirmed by my friend Joanna) but unfortunately became too packed with tourists and slightly dangerous so we decided to leave. [If you visit Pai canyon make sure you are comfortable with where you are and that there aren't too many people around you. Too many people were seemingly unaware of the risks they posed to themselves and others when near significant drops – Josh] 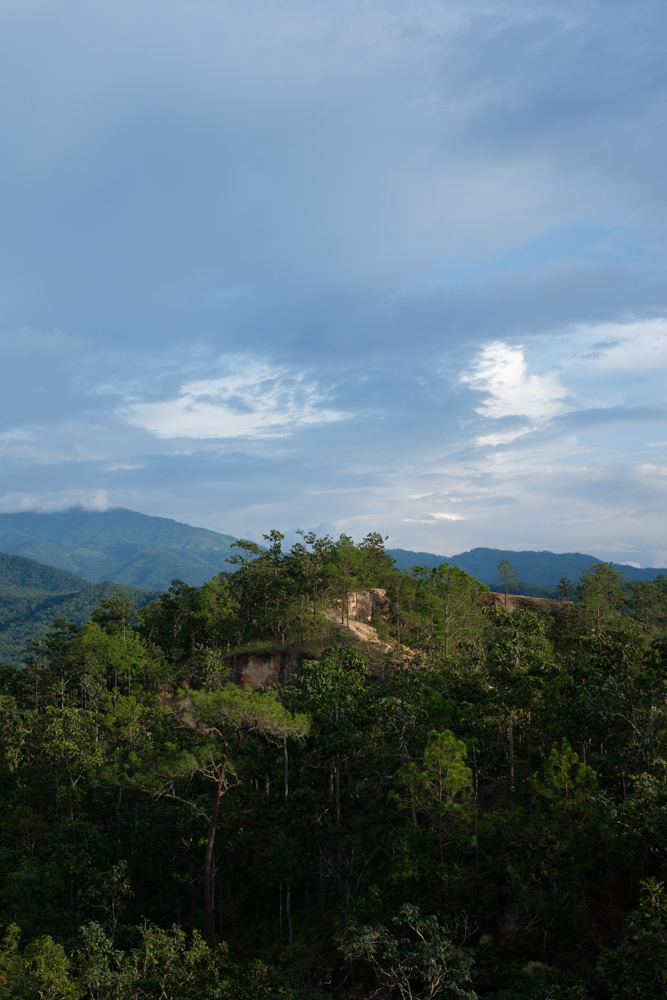 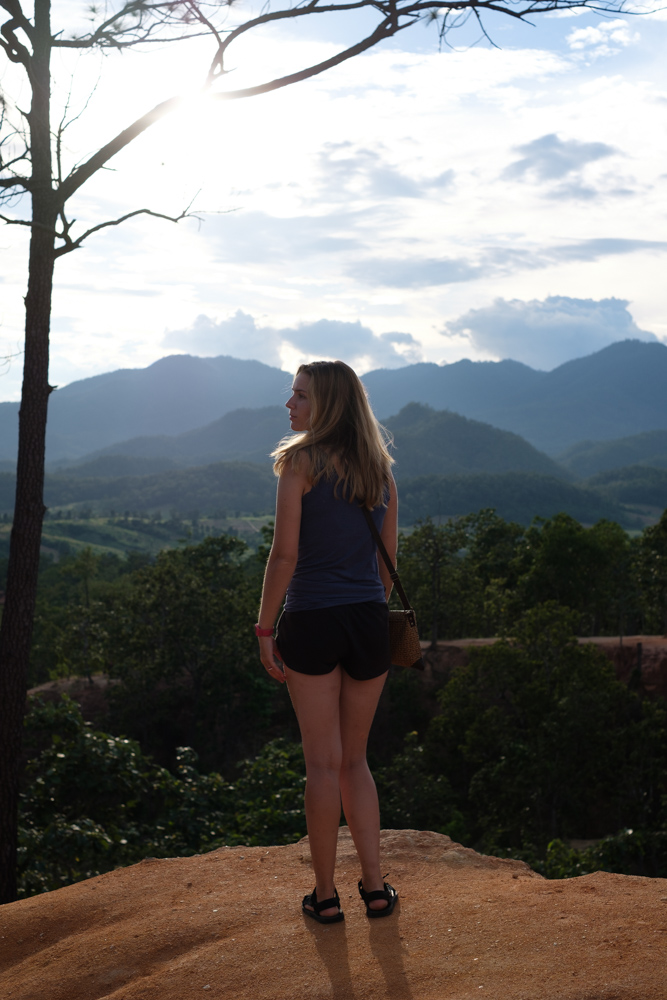 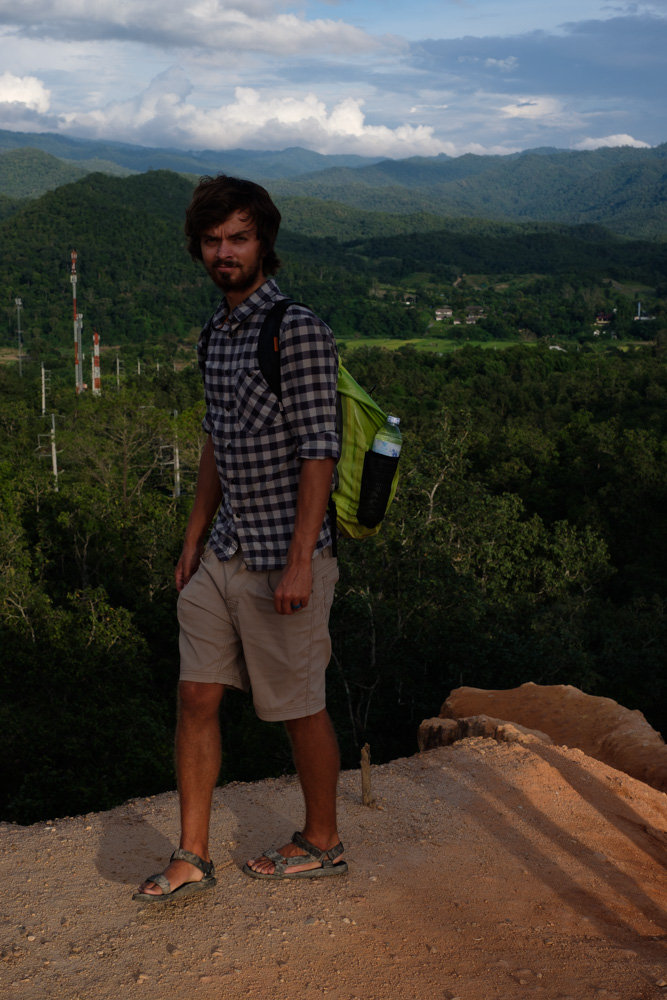 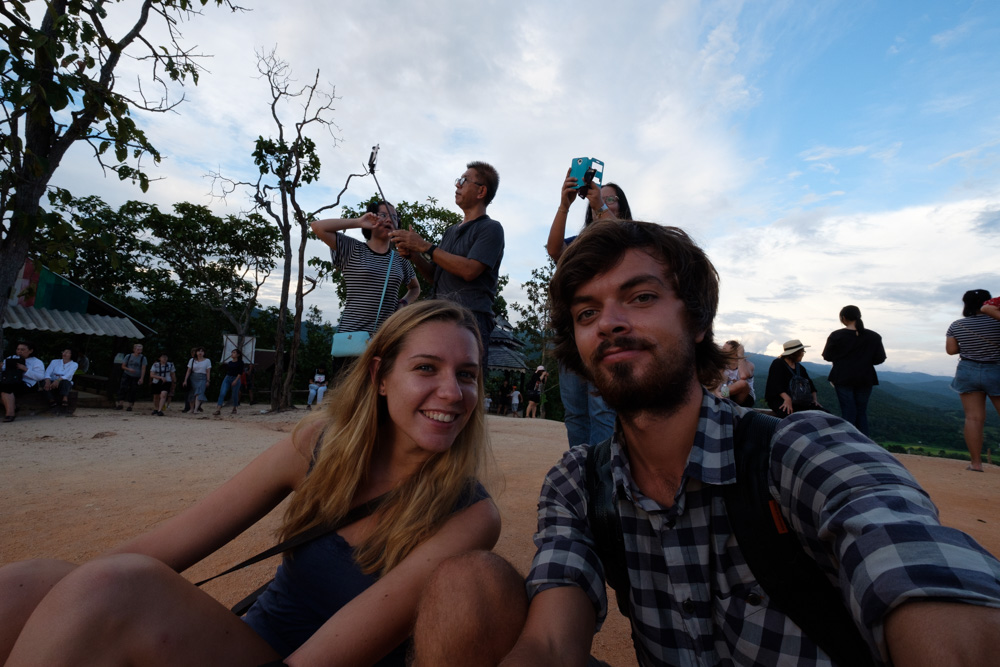 I thoroughly enjoyed the sights and would recommend the day trip to anyone, just be prepared for a long and bumpy ride! For our last day in the jungle we decided to have a lazy morning and then took a stroll to the restaurant on the river where the bridge building was occurring – you can take Josh away from thoughts of construction but it doesn't last long! The rest of our day then followed the same pattern – being lazy punctuated by eating! We had lunch in a restaurant with an amazing family history and then returned to Maya Burger Queen in the evening to make sure we gave the burgers a second chance to be consumed. This time we decided to play battleships whilst we ate – I won, woohoo! On our stroll back to our hut we went and got cupcakes which tasted surprisingly good! I thoroughly enjoyed our time in Pai for its laid back vibe and its beautiful views, the only thing I wish was different was that we'd followed Emily's advice and got a scooter license. But hey you learn from your mistakes! Pai was the break that we needed from the hustle and bustle, particularly before we hit Ao Nang (but we had no idea what waiting for us there!). I really do miss the north of Thailand but it's nice to be back by the sea.

You want beaches? You got beaches – Ao Nang & Koh Lanta

How can food this cheap be this good

We left Bangkok hoping for something a little smaller and as nice as Bangkok was, a little more chilled.…