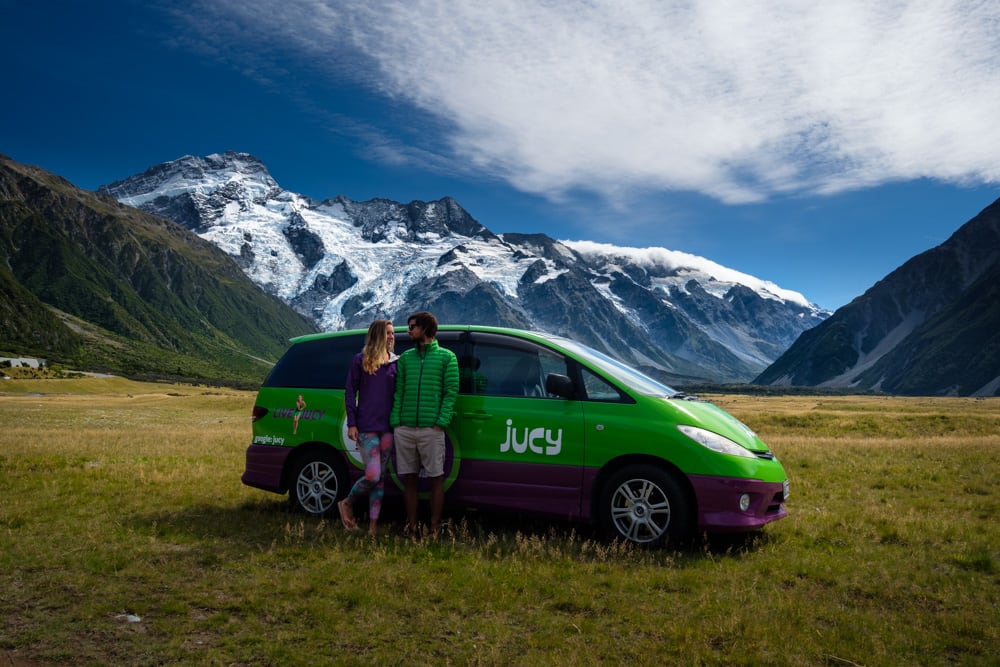 Why we booked JUCY

If you've not visited Australia or New Zealand before then you're unlikely to have seen a JUCY camper van. However, as soon as you set foot in Australia or New Zealand then it's pretty difficult NOT to see a bright green and purple JUCY on your travels. The reason for that? They're affordable and more well finished than what other camper van rental companies seem to offer (from what we saw when looking into other campervans at campsites around NZ). The company seems pretty friendly and they have a good presence on Instagram, so we were kind of hooked and decided we would base our month long road trip in NZ in a JUCY Cabana (the smallest camper that they have on offer). The Cabana is a Toyota Estima, essentially a car that can be converted to have a bed as well as having a mini kitchen fitted into the boot. 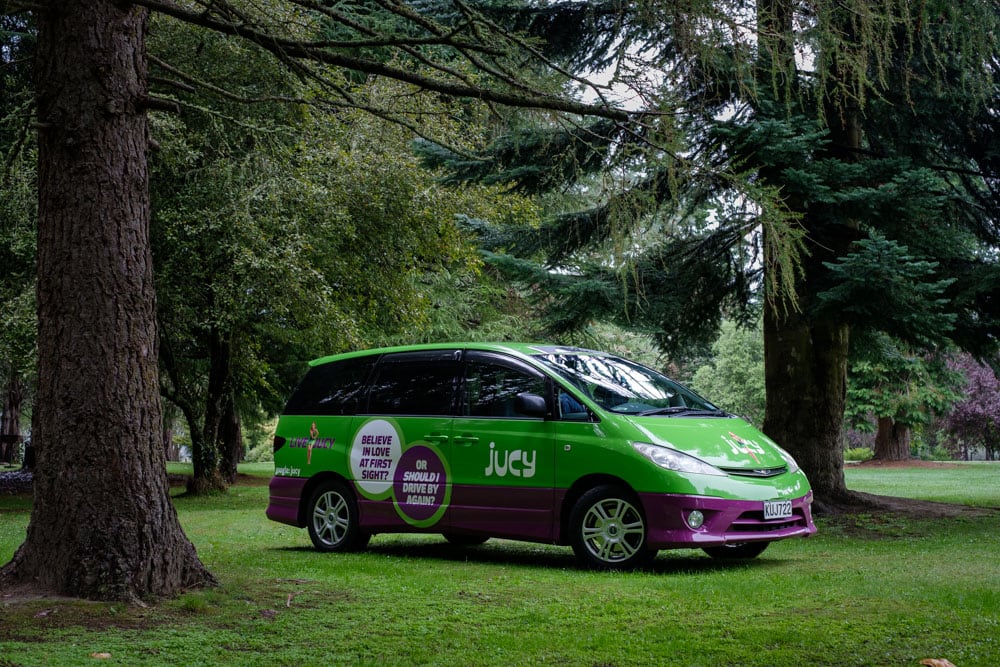 The booking process was pretty straight forward, I'd even go as far to say it was extremely easy with no hidden costs at all. We booked our JUCY about 2 weeks in advance whilst we were in Australia. We were planning on doing a round trip of the South Island so chose the pick up location and drop off location to be Christchurch airport.

You're then asked what level of excess reduction insurance you want. We chose the 'Risk Taker' option because we knew that our travel insurance with World Nomads includes a collision damage waiver as we chose the 'Explorer' cover. Make sure you check your travel insurance documents very carefully, as this could save you a lot of money! (The only thing which this option didn't cover was roof damage and windscreen/window damage, as long as we didn't break any of the JUCY rules.) That way we managed to save $30 a day!

The third step of booking is to add any extras that are not included in the camper van itself. As a couple who were only doing the South Island we chose to add on the camping chairs (a great shout so that you can sit outside when it's sunny!), we didn't need the ferry tickets or child related extras. For a GPS we used Google Maps which did the job very well.

Penultimately you add in driver information, which really isn't too difficult.

It really is that simple, and when you get to the JUCY office there's no hidden costs. The only thing is they preauthorise your credit card for the $3000 of damage excess if you go with their 'risk taker' option. 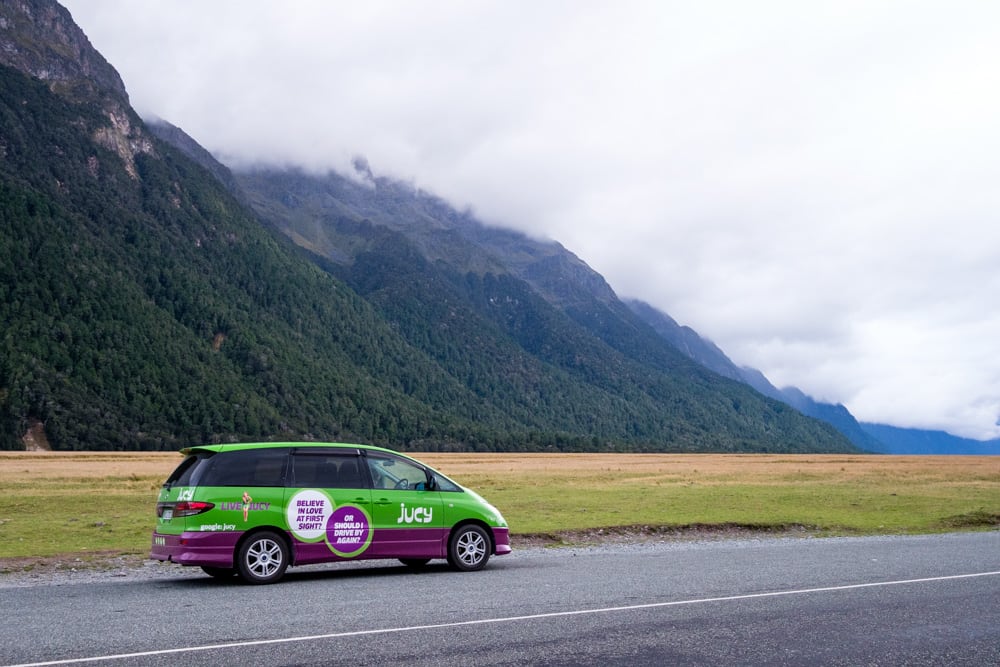 Picking up the JUCY

After arriving at the airport, we walked the distance to JUCY – pretty long if you have heavy bags! But I think you can get a free shuttle bus, so ring them up and ask if you want to save your tired legs.

Once at JUCY we were given paperwork to sign, this included doing a check of the state of the car and marking any damage on a diagram of the vehicle so that we would not be charged for it when it was returned. Our driving licenses were copied and Josh's credit card had the $3000 damage excess preauthorised. We were given a quick tour of the vehicle, including how to set it up for the night. Then we were given the keys and we were off!

Including the queue, the whole process took about 20 minutes.

What the JUCY had in it

In short: everything you need to sleep, prepare food and dry yourself with after a shower. But I guess if you're renting a JUCY and found yourself on this blog you probably want a bit more information than that.

Front of the camper van: It's a car, so it's exactly what you'd expect. We had an automatic gearbox and a foot parking brake instead of a handbrake. There were plenty of cubby holes, cup holders and glove boxes to hide things away in. There was a detachable CD/radio system, we detached it and placed the iPhone there with Google Maps on it for navigation. We also used Spotify and played the music out of a UE Boom 2 speaker which we kept in one of the cup holders. The only thing of major note was a sticker on the dashboard which reflected in the windscreen saying 'KEEP LEFT' – handy for all of you that don't naturally drive on the left. 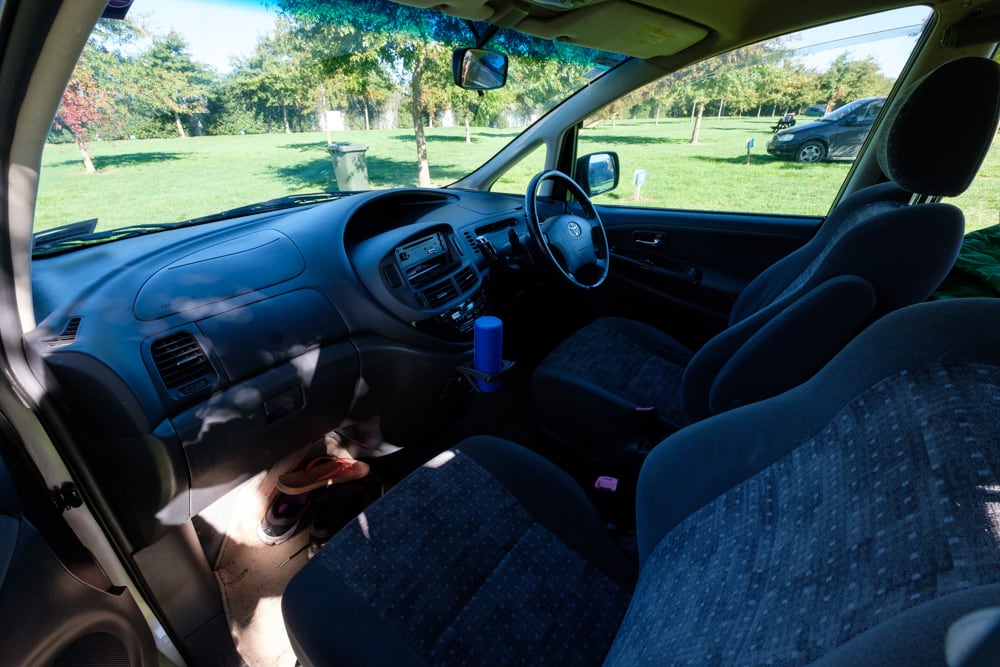 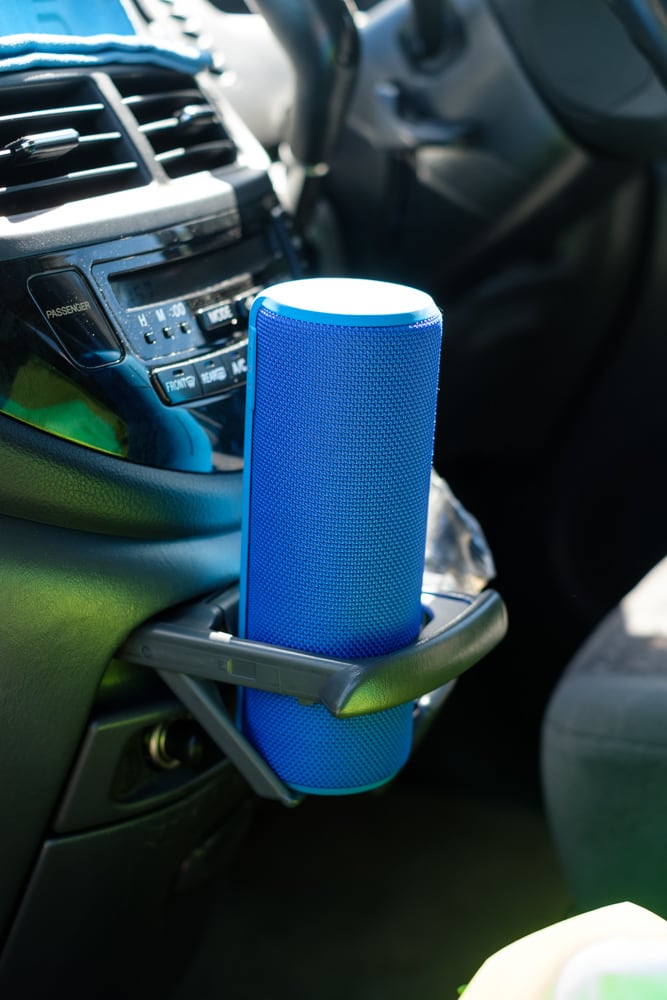 Mid-section: Rear passenger seats with seat belts, and a piece of covered foam which could rest on the seat to cover the seat belt buckles and level out the seat for when you're sleeping. A bench seat behind the front seats, this had storage inside as well as the table which you could set up when the bed wasn't pulled out. The top of the bench seat slid out to make the bed. On the passenger side of the bench seat there can also be found a USB charging port as well as a cigarette lighter. Hidden in the storage area when you first pick up the camper van is all the bedding, towels and a dish towel. When you're ready to sleep at night there are blinds which roll down and fix to the windows (these are super dark!), as well as lights fixed to the ceiling. A thing of note is the cubby holes which are next to the rear seats which is where we put our heads when we were sleeping - they're great for stowing away your phone and anything you want near you when you wake up. 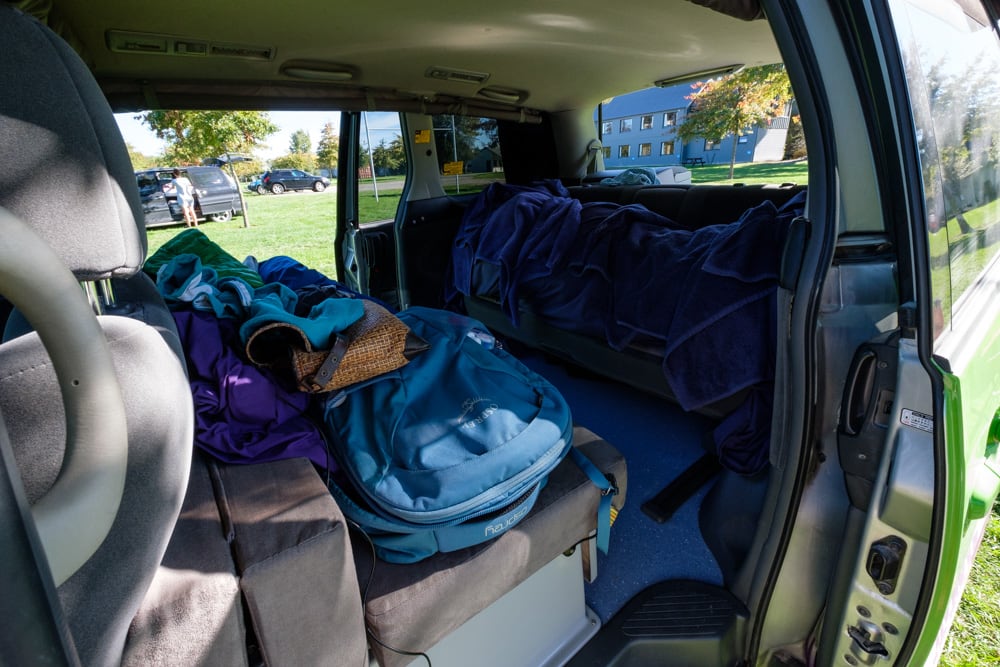 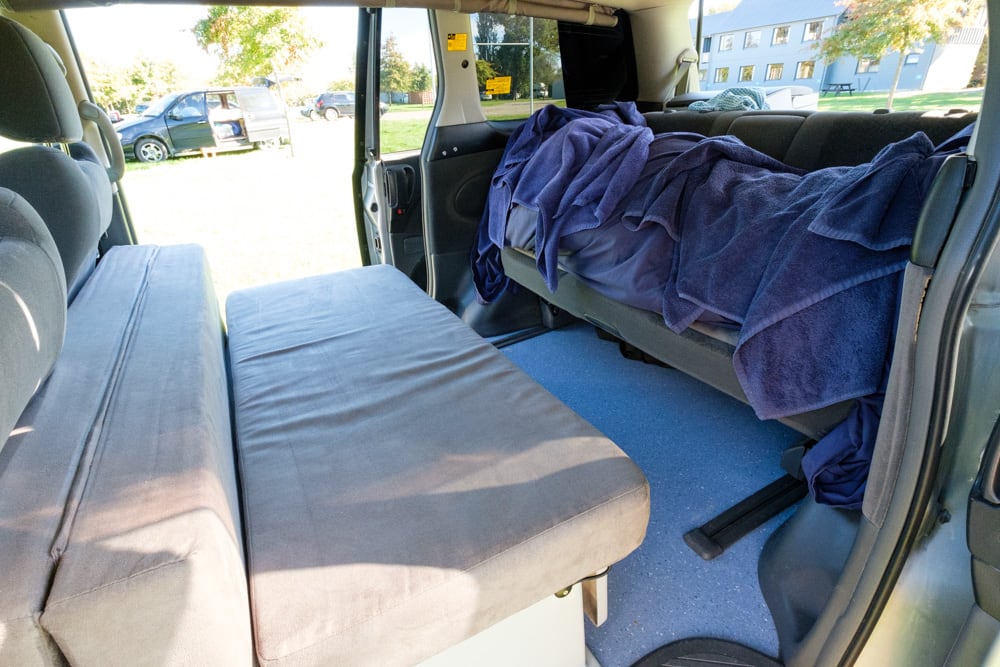 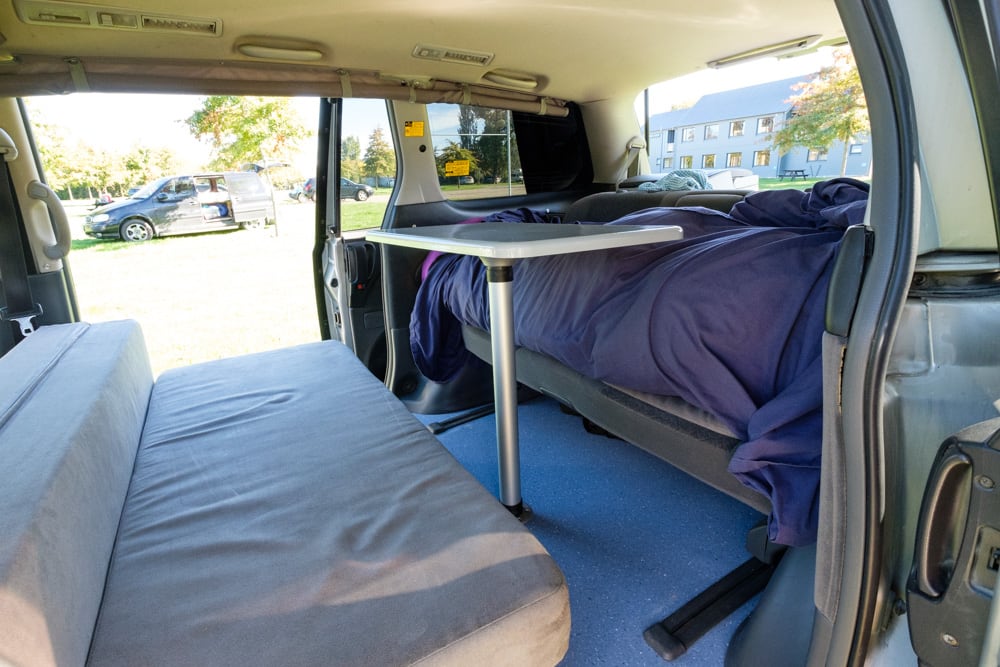 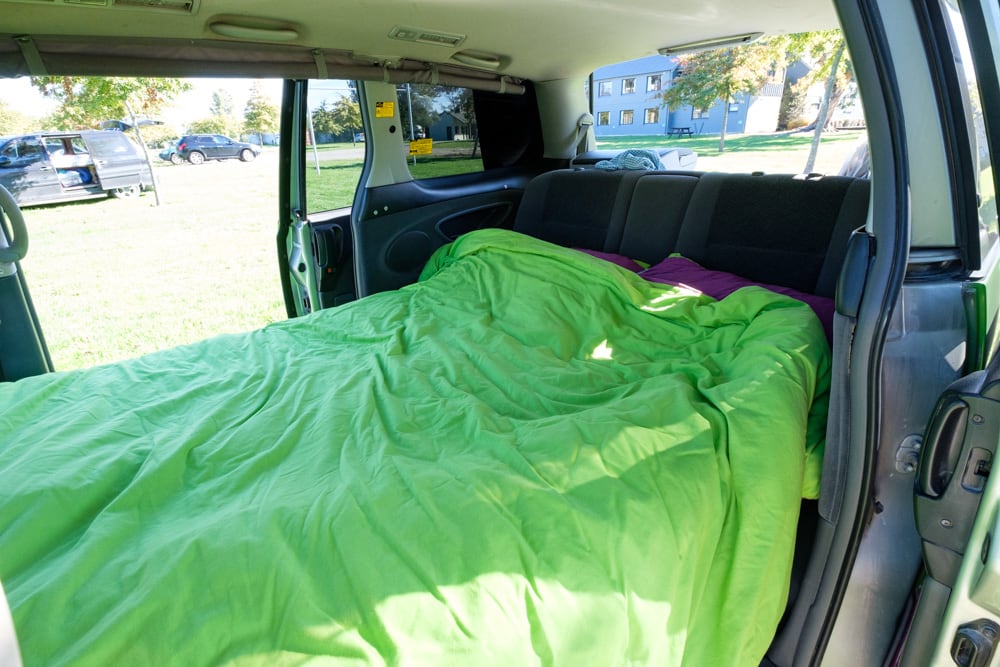 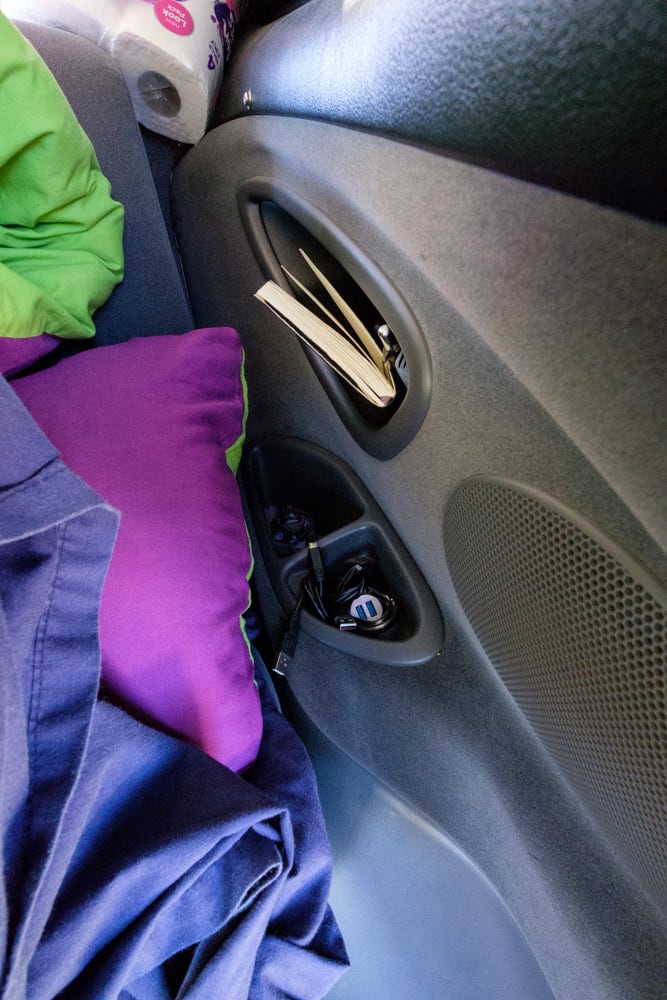 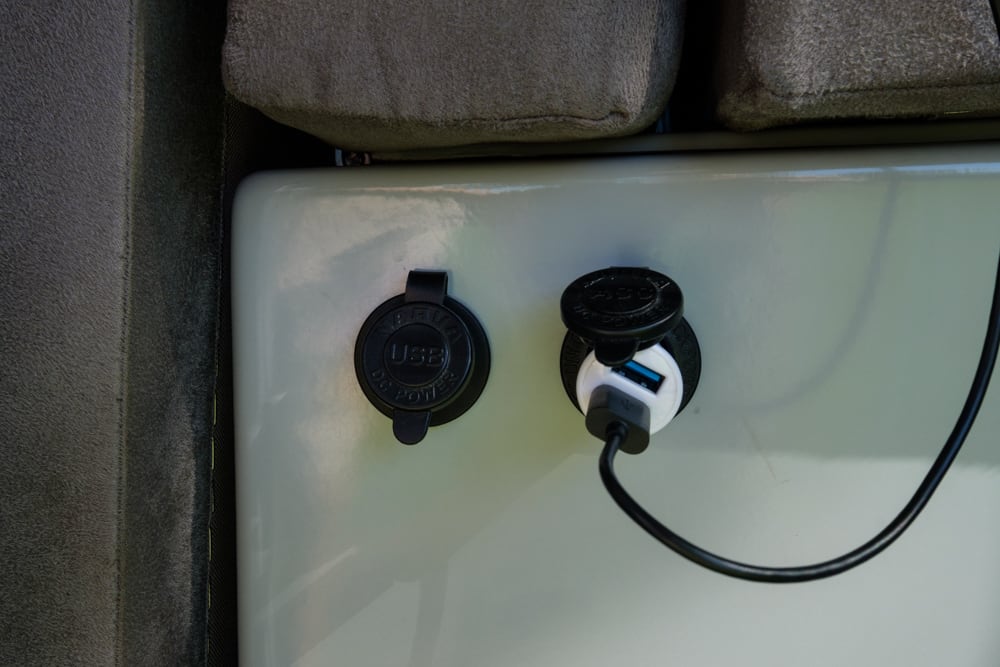 In the boot: This is the space that has been converted into a kitchen, and it's much more than what we expected. There's a water storage unit, we never held a full tank so that we could maximise fuel efficiency. The water could then be pumped out into a sink, the sink had a plug – if you didn't use the plug then the water would just run out underneath the car. The sink was covered with a chopping board and there was a small drainage board. Next to this there was a small fridge which ran off the leisure battery rather than the normal car battery so you can charge things without the possibility of draining the main battery and not being able to start the engine. The fridge stored enough food for about 4 days for 2 people with cider as well. Underneath the fridge there was a pull out camping stove which came with two gas canisters. Under the sink was the storage area where all the utensils and cleaning equipment was stored. What came with our JUCY cabana in that storage area: 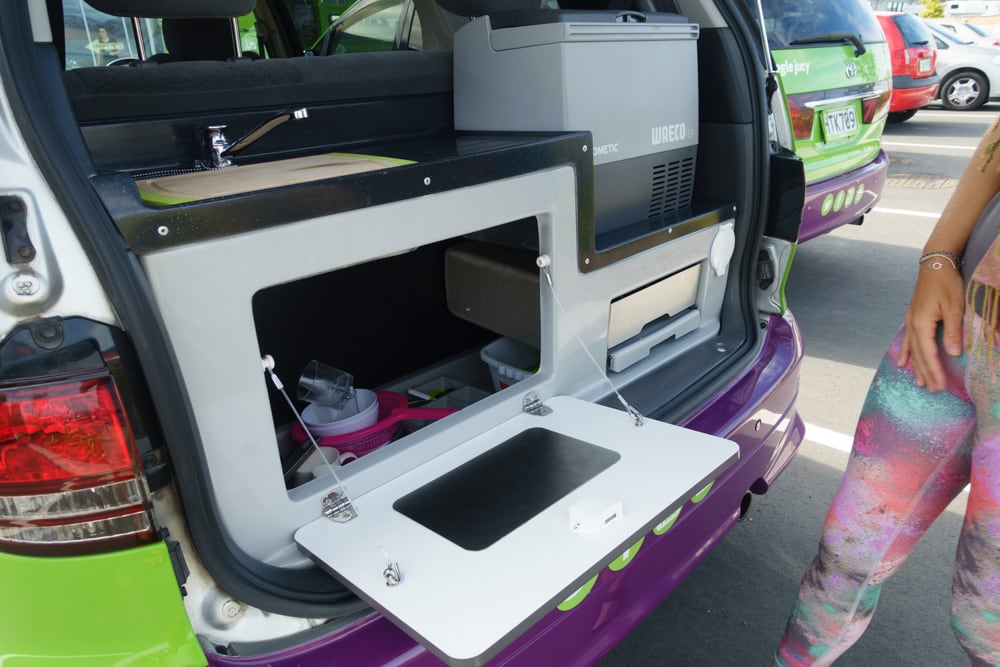 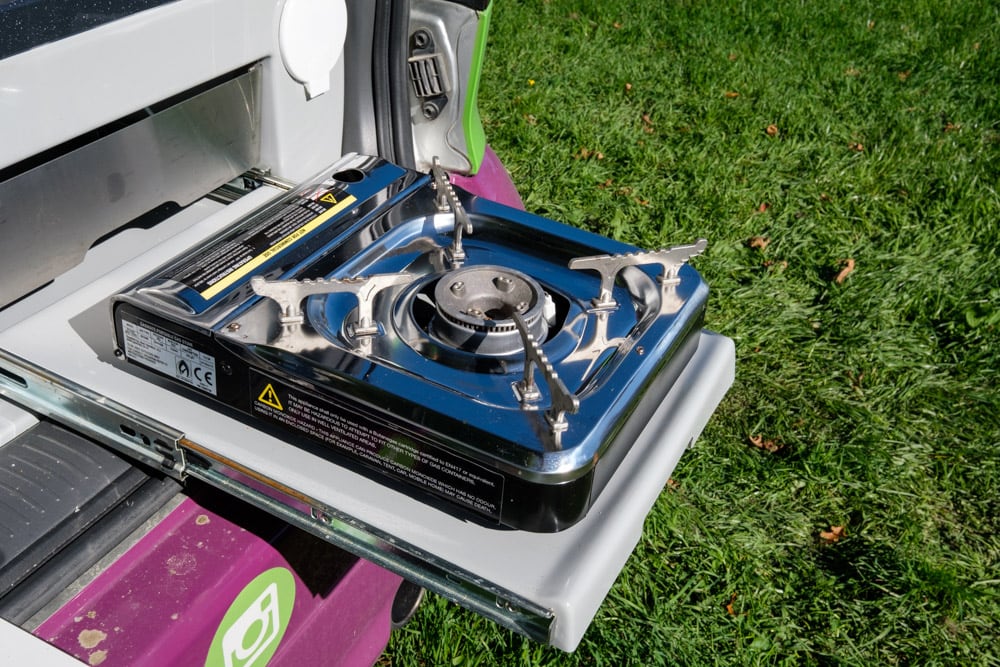 Pros and cons of the JUCY Cabana

Campsites we recommend you should stay at in the South island:

Dropping off the JUCY

Saying goodbye to the JUCY was much quicker than we expected, as soon as we'd finished clearing out the camper van of all our belongings a JUCY guy came over. He quickly checked the car over, signed it off and then took the keys. He offered to get us a lift to the airport and then said goodbye. 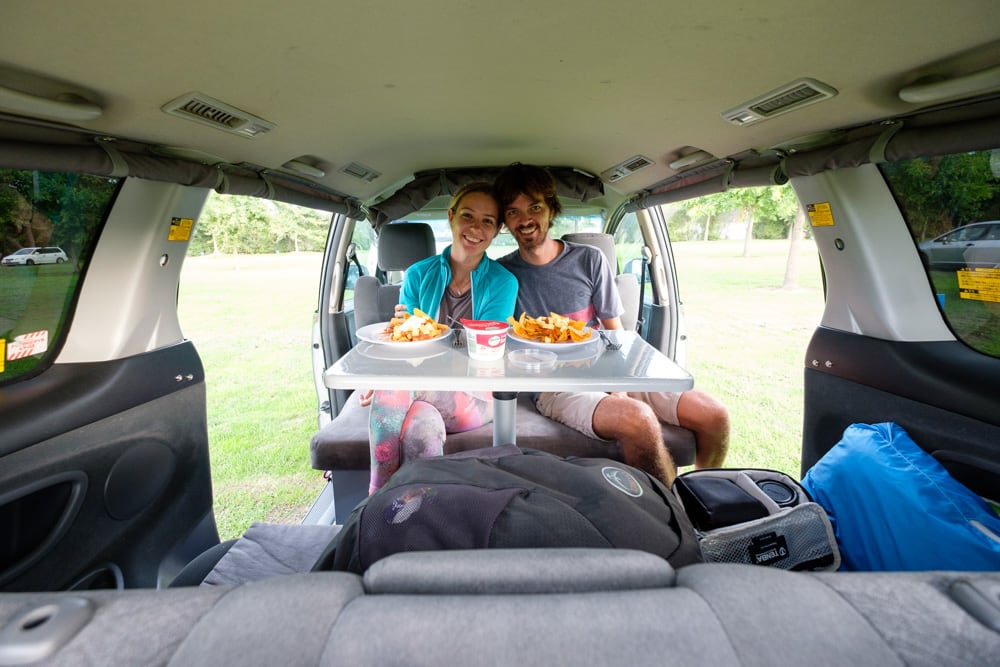 A month was the longest amount of time I could spend in the Cabana, especially as it was raining a LOT towards the end of our trip so we spent most of our time inside it. However we thoroughly enjoyed our road trip in the Cabana and at no point did we regret it. I would wholly recommend JUCY to anyone touring NZ or Australia, I'd even be jealous of you!

Our second week in New Zealand saw us in the southern most part of the South Island, and with…