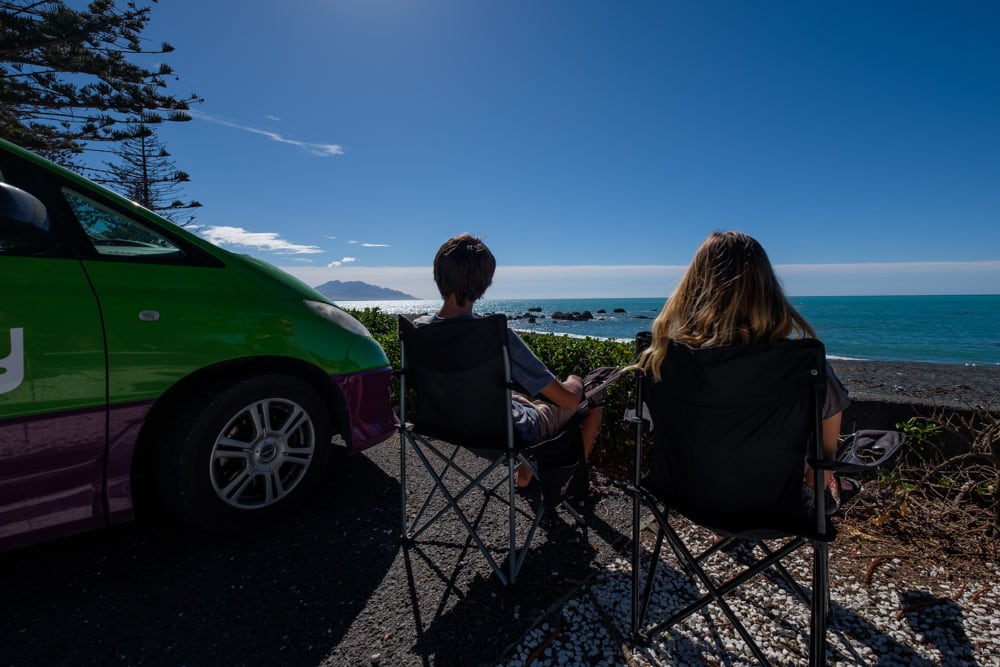 I'm currently sitting writing this blog post in our second camper van of the trip in Mojave Desert USA, we have been stranded here due to high wind weather warnings and boy are they not joking! The 70mph gusts are swaying the van so much that it's making me feel a bit sea sick, but it gives me plenty of time to write. So off we go with the last instalment of our New Zealand blogs.

After Kumara we were keen to go to a nice campsite, using our favourite Camper Mate app I found Gentle Annie's. It was a bit more north of the South island than I would have liked as we decided not to do the north coast due to the campsites being a lot more expensive for nothing more than being as close to the North Island as possible. The reviews of Gentle Annie's promised a relaxed and isolated atmosphere, lush ocean views and good homemade food. We didn't need to read anymore after that, we were hooked.

The drive there was rather easy at first but the last 3km consisted of a pot holed dirt track which I found a little bit difficult to navigate but we managed. The campsite had a great boho vibe cafe called the Cowshed, we spent most of our time in there trying to escape the rain and the MANY sandflies. Unfortunately those sandflies are pesky and persistent and managed to navigate their way into the cafe and constantly bite any skin on show – including your face! It was in the Cowshed that we tried a biscuit type thing called an Anzac Caramel, there are no words to describe how delicious it was and I definitely intend on recreating them at home. We stayed at Gentle Annie's for two nights and I'm pretty sure if we'd stayed any longer we would have eaten all of their homemade Anzac Caramels, we even debated buying some for the road. 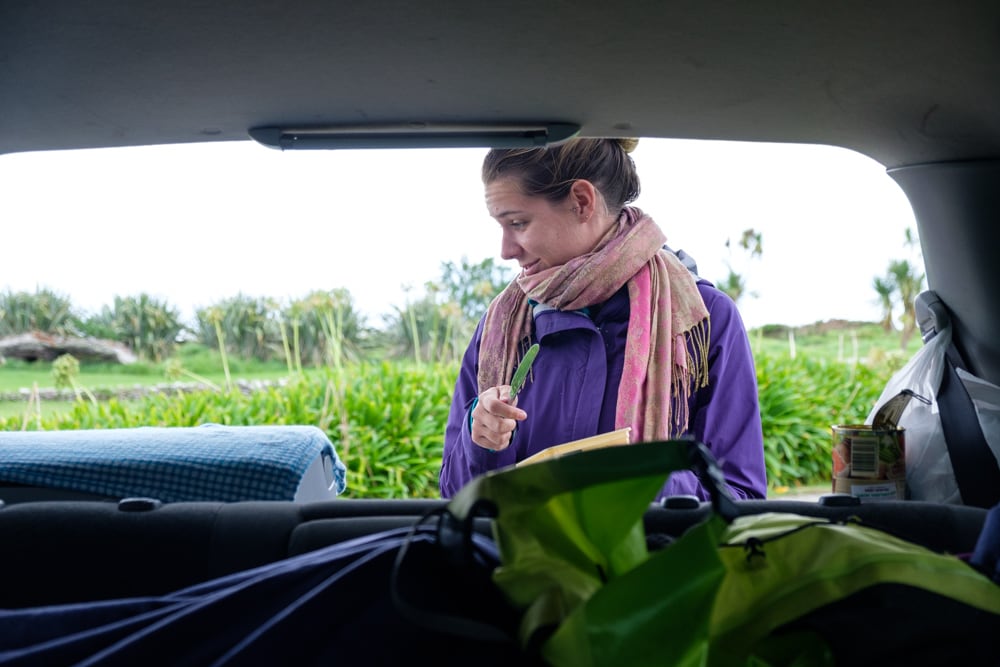 Unfortunately the weather whilst we were at Gentle Annie's wasn't great so we didn't get to do many walks apart from a sunset stroll behind the beach. There were also SO many sandflies that loved feeding on us that we spent most of our time in the cafe reading or using the wifi. 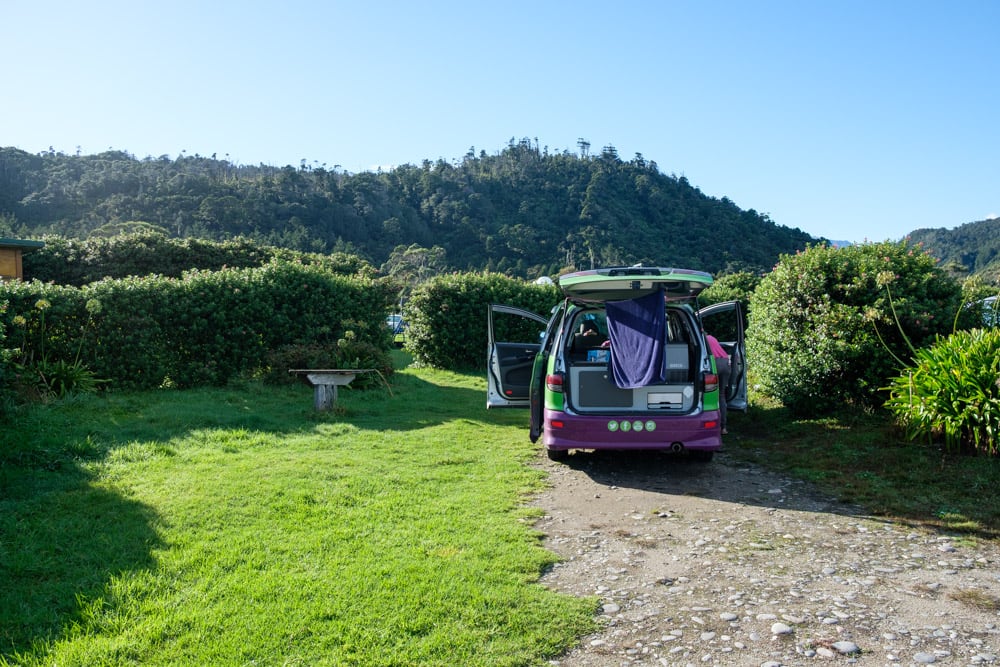 This was more of a strategic stop so that we didn't have to spend too long driving, rather than it being an amazing place to stay. When we got there it was difficult to find the motor camp, when we did park up and decide to go for a stroll we found that the high street shops were all closed apart from a little supermarket. At least the kitchen in the motor camp was nice to cook in, even if it did remind me of secondary school cooking class as it had lots of individual workstations.

As we made our way east across the island to start going back to Christchurch we found ourselves camped in Waiau. It is known as a small town that was hit by the recent earthquake in 2016 and is the last petrol stop for over 70km – how interesting… When we reached Waiau we were pleasantly surprised – the sun was out and shining which made a big change as it had been raining on and off for the past two weeks. I made the most of the warm weather by doing our laundry and then we sat and read in the sunshine.

The next day we decided to stay another night as my dodgy belly meant we couldn't explore the area the day before. In the morning we went for a really lovely walk along the river and then had lunch back at the campsite. 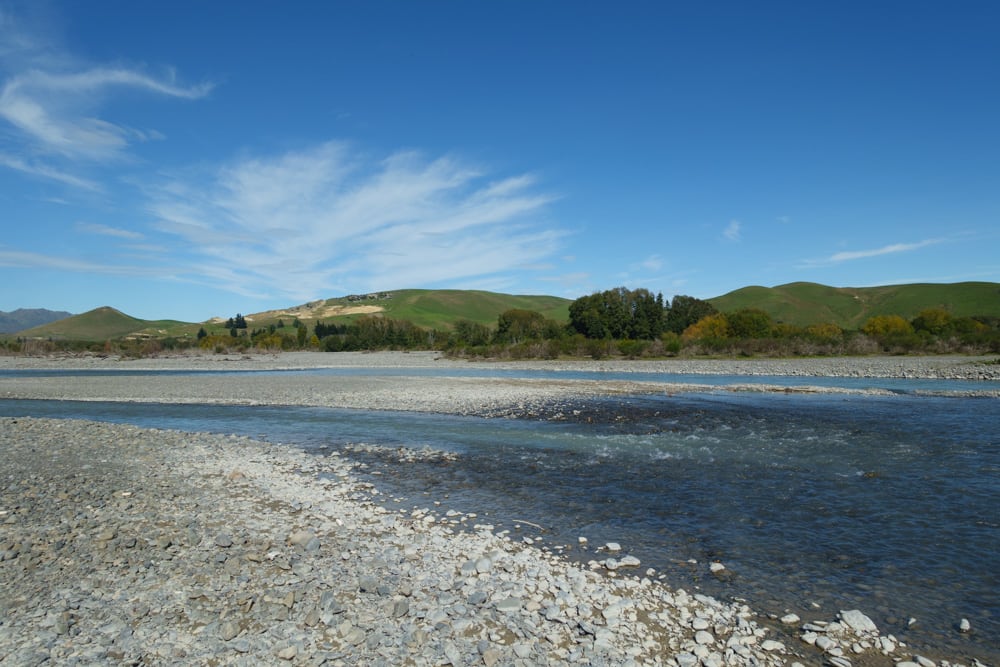 In the afternoon we decided to visit Hanmer Springs, a village that was highly recommended but with that the price tag of their campsites was really high. I used Trip Advisor to see what there was to do in the area and found A-Maze-N-Golf, we'd been eyeing up mini golfs elsewhere so I decided why not try this one. I'm so glad we did, it was SO much fun! We giggled like children the whole way round the golf course at how bad we were, we both managed to get the ball in the water. 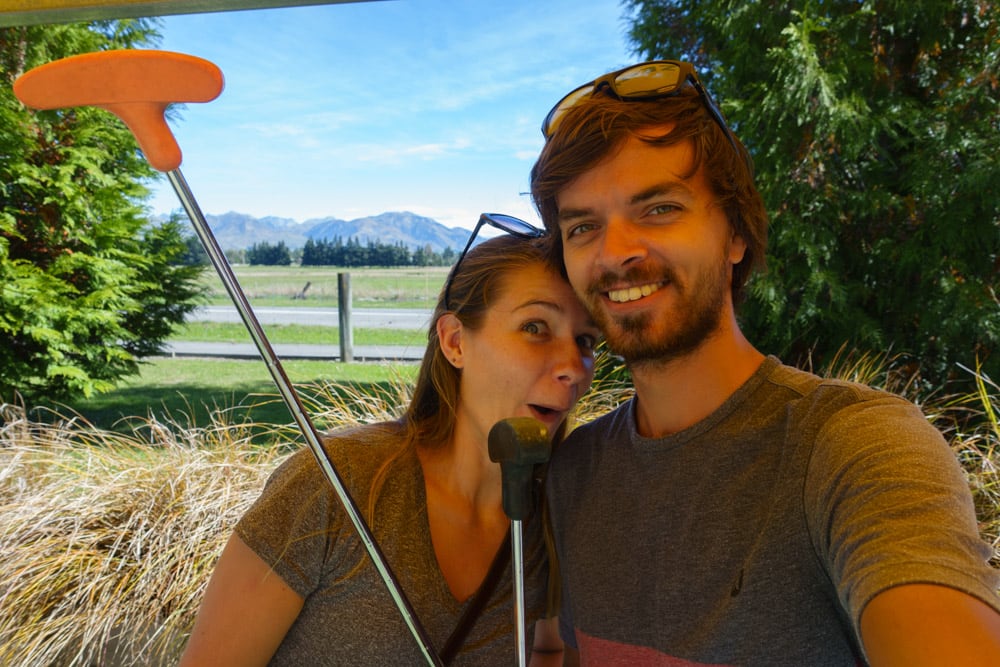 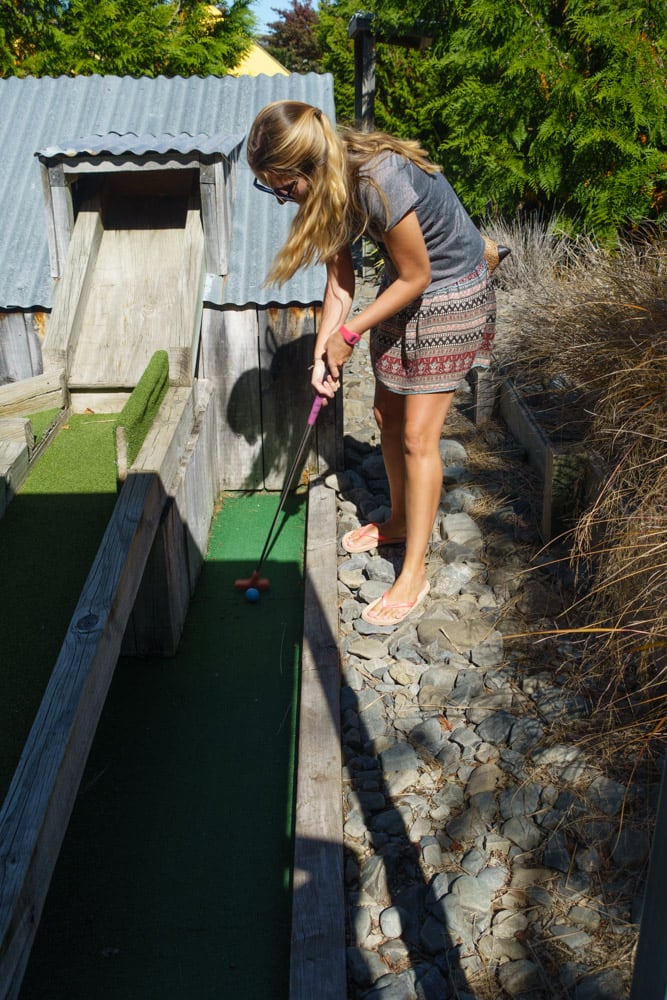 Then we had a go at the maze, where I told Josh that we should compete to get all the hidden words and complete the phrase. With that I ran off and childish laughter ensued every time we bumped into each other. It was also a pretty frightening maze! It had super dark rooms where the only light was being reflected by fluorescent paint and a wall that pretended to fall on you – it was more convincing than it sounds as it even made Josh scream! 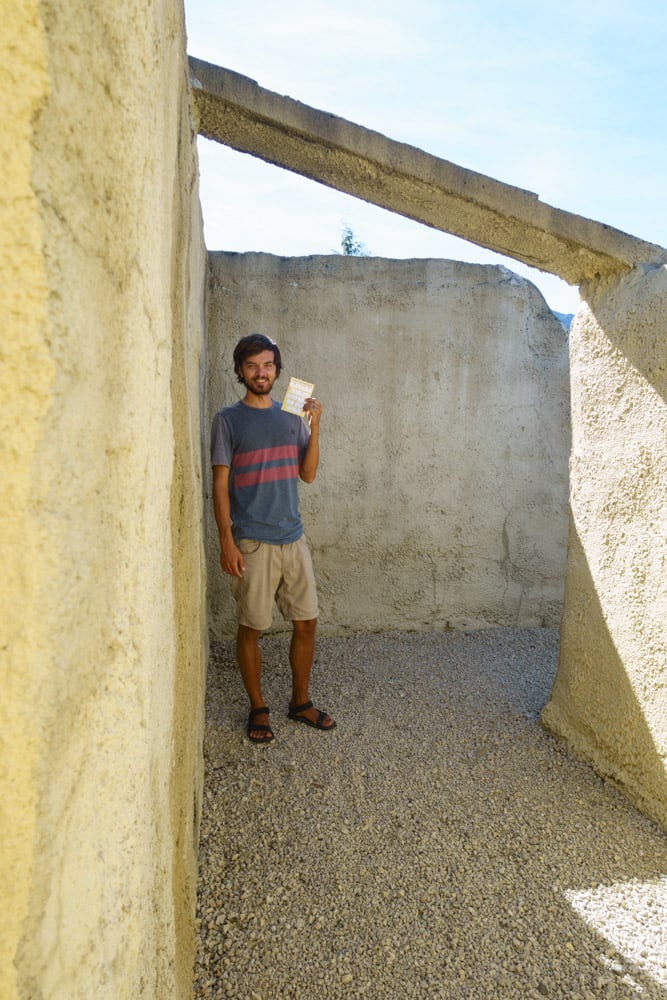 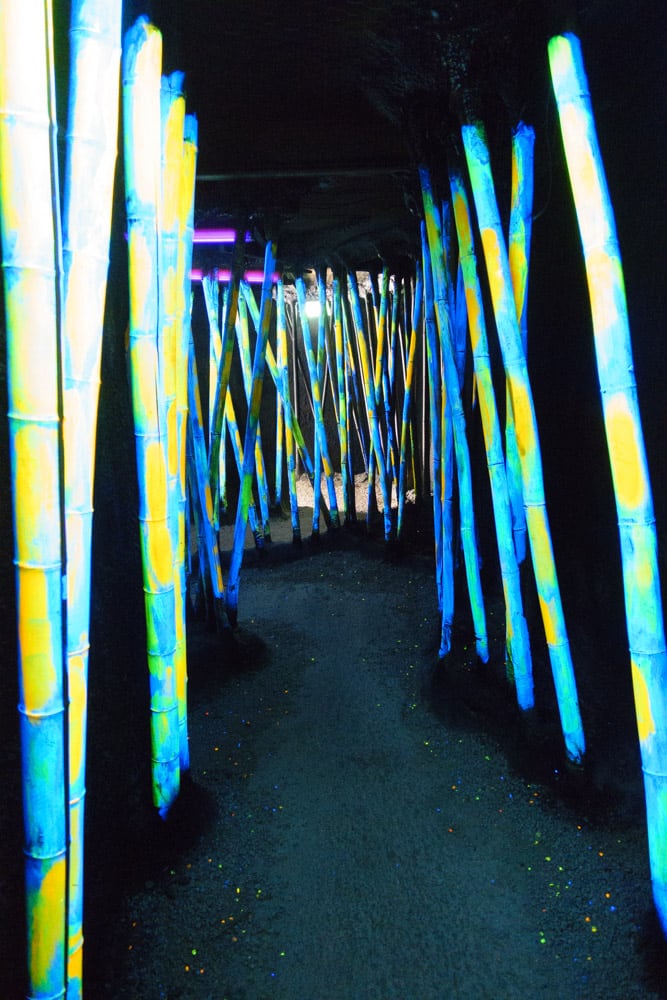 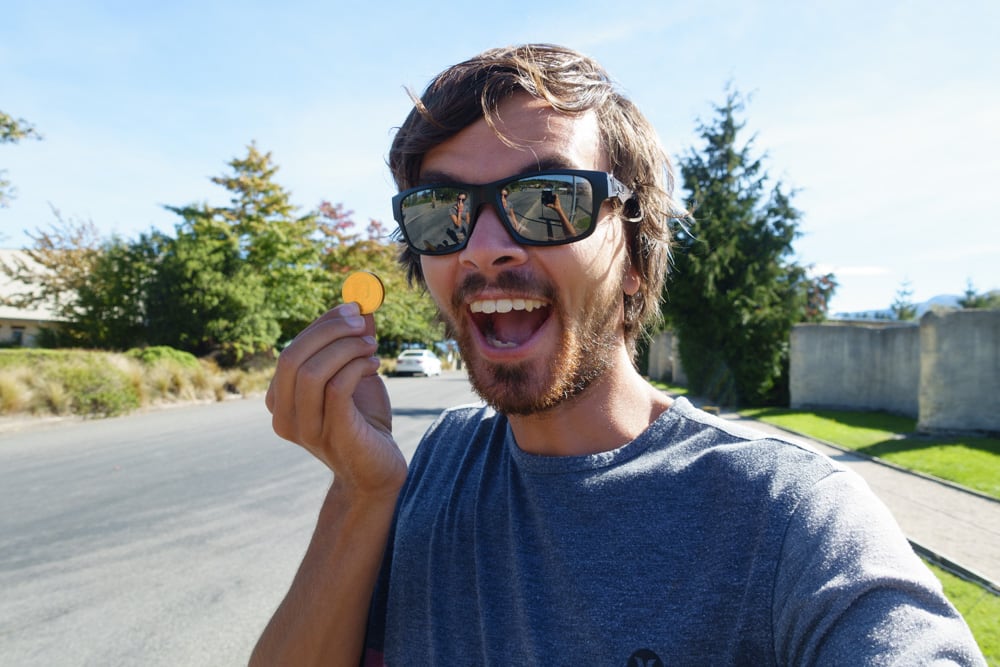 We then visited Hanmer Springs centre which felt just like Centre Parcs in that it was pretty fake and lacked any kind of atmosphere but it was well landscaped and looked pretty. We decided to get a cake and drink and sit by the lake, unfortunately for Josh his choices were disappointing.

As we left Waiau we headed north (the opposite way to Christchurch but apparently there was an amazing lodge) to Mount Lyford. The distance meant it should have been about a 20 minute drive but due to all the roadworks which were fixing the earthquake destroyed roads the drive ended up taking over an hour. When we arrived at Mount Lyford Josh drove a gravel track past lots of posh ski chalets (there's only about 2 houses that are occupied all year round) to the beginning of a walk where there were tons of bees (ARGH). 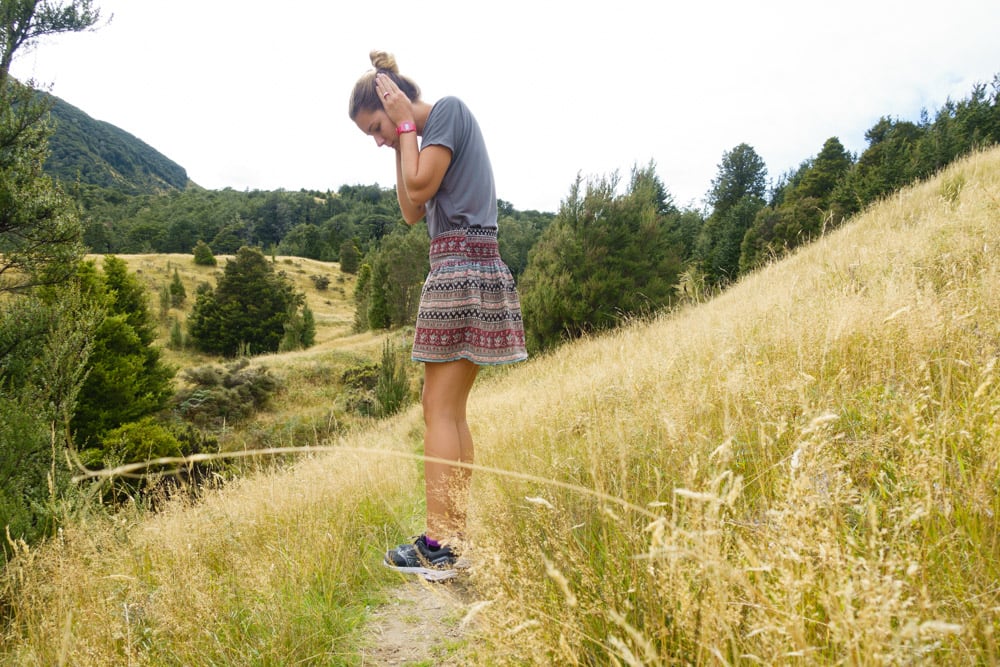 After lunch we did the walk to 'Crystal Lake', we're still not quite sure why it got that name, it was rather disappointing to say the least. As we left the lake to complete the loop back to the car we walked through woodland that was covered in what looked like a black fungus, it was overtaking everything and looked pretty deadly like something from a horror movie [I held my breath and didn't even stop to take a photo. That's how dodgy the stuff looked – Josh]. 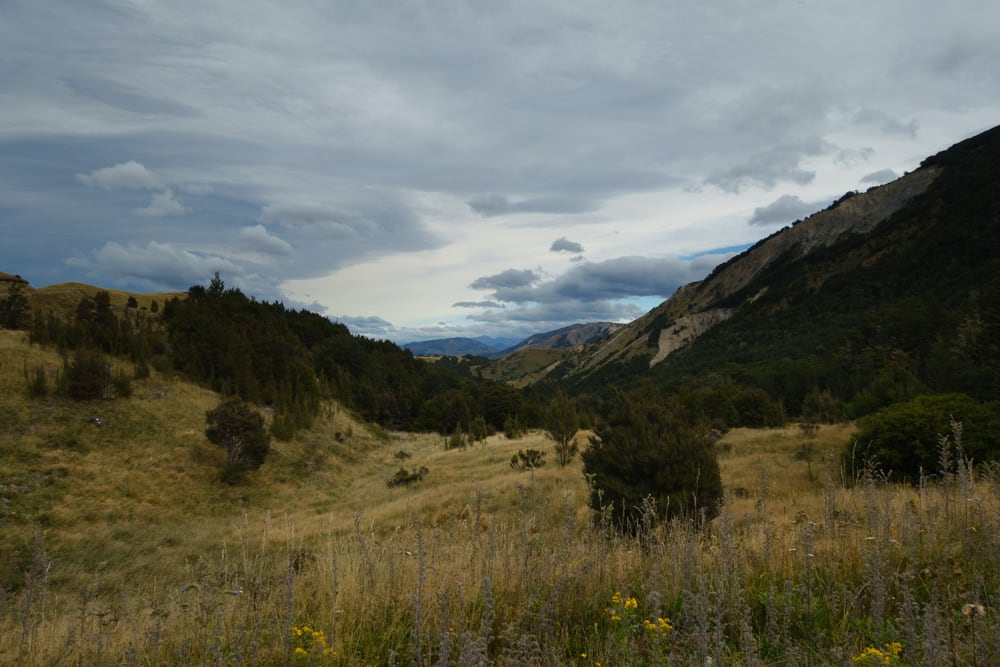 We soon got in the car and headed to Mt Lyford Lodge, we camped in essentially the pub car park but it had nice showers and an amazing bar area. The owner laughed when I told him we thought the black stuff was killer fungus and he set us right in saying it was just lichen. We sat in the bar and had a few ciders whilst writing a blog and listening to the lodge owner tell us lots of stories about the lodge during Winter and the earthquake, it was a very chilled evening.

We didn't stay at Kaikoura as most campsites were full with road workers (still repairing the damage from the earthquake), so instead we just paid a day visit. The drive there was SUPER slow due to all the road works and our camper also started screeching whenever it moved (it was pretty worrying and rather annoying as we knew we were handing it back the next day).

When we finally got to Kaikoura we went to the lookout which had pretty stunning views and then had lunch by the beach.

Kaikoura didn't really have much else to do unless you'd booked a whale watching tour so we drove to Christchurch along more badly damaged roads. However the main attraction was seeing seals from the road! They were quite difficult to spot as the driver, but the roadworks meant we were stuck in traffic a lot of the time so I could look from time to time. 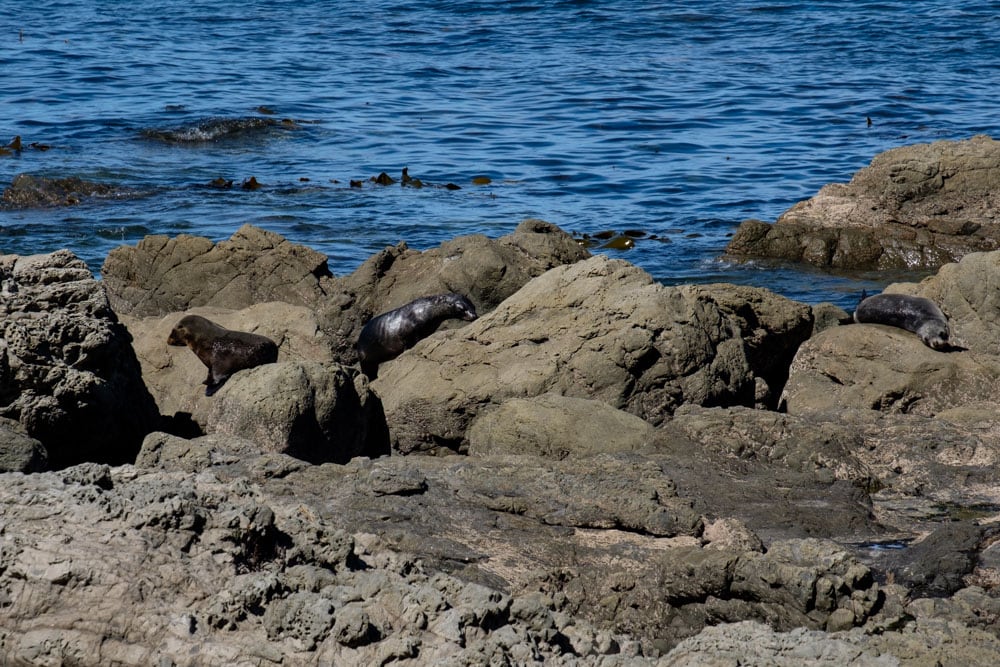 We spent one night in Christchurch in our camper van, back in the campsite we spent our first night! We then had to waste the morning so Josh dragged me around the WHOLE of Mitre 10 (NZ's version of B&Q), I dragged him around a stationery warehouse in return and then we went back to JUCY to hand back our Cabana. It really felt like the right time to be giving the camper van back, a month in such a small camper van was the maximum amount of time we could spend in it.

We still had one more night in Christchurch in an Airbnb but couldn't check in yet so we went to a cafe to read and eat cake (standard). After we checked in to our Airbnb we went and ate a HUGE Pad Thai which was pretty tasty and made us reminisce on our travelling experiences so far. When we got back to our Airbnb we went to bed early ready for our 4am alarm, ready to start our journey to the big and scary USA.

Across all of the countries that we've visited so far, New Zealand has been my favourite in terms of landscapes. It is absolutely stunning with its rolling hills, beaches, mountains and gorges. The population is so small that the place still feels really natural and wildlife is all around (not just sheep). The weather was the only thing that put a downer on our NZ experience, but I'm sure that if were better prepared with waterproofs everything would have been amazing. If you're considering visiting New Zealand then I would 100% recommend it.